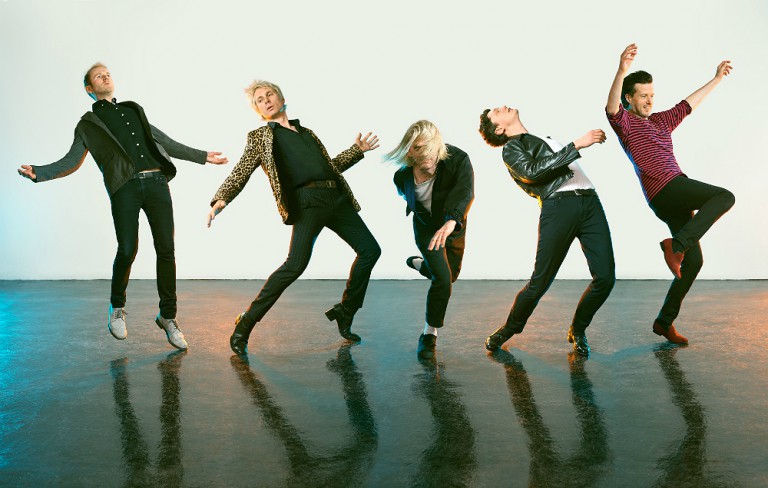 It’s been nearly five years since Scottish indie cultists Franz Ferdinand put out the career highlight Right Thoughts, Right Words, Right Action. It may seem like a long, arduous period of waiting for fans and band alike, but there’s been plenty of activity from within Camp Ferdinand to keep all parties busy and entertained. Take the art-pop collaborative project with Sparks, FFS, as one good example, as well as a packed summer festival tour last summer. This week Friday, Alex Kapranos and co. will put out the hotly anticipated Always Ascending, their latest body of music and first with new members Julian Corrie and Dino Bardot. We called up drummer Paul Thomson for a round of quickfire questions to discuss the record’s inception, new members and moving on.

Hey Paul. How are you?
Not bad.

Let’s go back to the end of the Right Thoughts campaign. Looking back on it in hindsight, how do you reflect on that campaign and moving forward into this one?
It’s been a few years, to be honest. Right Thoughts was a very different record to this one, also in the way we approached it. On Right Thoughts we worked three songs at at time, but for Always Ascending we worked at a more intensive pace, even if it didn’t feel that way. We wrote it over the course of eight months in our own studio, working it like a normal, Monday through Friday working week. We were just kind of hanging out, and we didn’t feel all too much pressure compared to what a job would give you. We were just doing it because we wanted to. At some points we’d also go off and tour for fifteen months at a time, before taking a break. Some people do complain about the long waits, but we just do what we want.

You also worked with Sparks on a record in 2015. Is that a path down which you’d want to head in the future? And did it play a part in how you worked on Always Ascending?
I wouldn’t like to say no, but it honestly just has to happen. With Sparks we wrote a couple of tracks for one, and then a couple more for another but after this we felt so creatively inclined to make music that we decided to collaborate. Not per se as a supergroup or new band, but just a collaboration. That’s our approach to a lot of things, and we never know how it’ll end. We don’t tend to plans things in advance.

How have you found the reaction to the new album so far?
It’s been really good! I found myself kind of looking for negative feedback and being disappointed that I couldn’t find any, but I think I only did that because I quite fancied just taking on anybody who was wrong. It’s all been very positive. The hardcore fans took to it well, and some new people who wouldn’t want to initially associate with Franz Ferdinand were also quite into it.

The album sees some change for Franz Ferdinand. Can you outline me the time period before you came to acquiring your two new members? And how far into the process for Always Ascending were you at this point?
We started working on this record as the three of us – Alex, Bob and myself. We were getting on fine and using what we had in our studio, and as none of us are skilled audio engineers we just taught ourselves. Then we met Julian, who had worked as an engineer for the BBC; we subsequently made him the engineer on the record, haha. He didn’t complain! He’s also an excellent musician, and once he joined the creative process the album stepped up a gear in speed. He’s quick at things we aren’t. Julian joined us in August 2016, and we started recording in February this year. In that time he’d even learnt all of the older songs! That was a big factor for us in looking for a fourth member, as we needed someone who was capable of covering Nick’s parts live. Julian tends to give himself too much to do onstage, which is because he’s very skilled. He’s a natural musician, and he’s very pragmatic at solving problems and finding solutions. He sets himself challenges, whereas the rest of us are somewhat lazier. Dino, the second new member, joined us after we’d already recorded the album, but I’ve personally known him for years since I moved to Glasgow in 1998. I played with him a few times as well, and he was in a band called The 1990s. Dino’s been around for ages, so it was exciting to get another member to cover parts of the record which we couldn’t physically play.

With the live aspect of members like Julian in mind, would you suggest that Always Ascending is a live album as opposed to a studio oriented one?
I think it’s both live and studio. We can play the while record live, albeit with some slight changes live. However, the studio is the four of us playing it live with some additional little sounds. I’d hasten to say that it’s a headphones record too, and most of the music I personally listen to is something along those lines too. It’s the kind of music which you can engage to on a one to one level.

To conclude this brief chat – we’ve not seen an awful lot just yet in terms of visuals, but what kind of direction/aesthetic are you looking at on this campaign?
There’s currently a live production which is a work in progress. For the single artwork we’ve used a photograph of some text set between two mirrors which we’ve sort of manipulated in real time, and that’s something which we’d love to do in a live setting as well. We had a pretty big production on the Right Thoughts campaign as well, and on that run we also played pretty much the same, solid setlist every night. That’s something which was down to having such a rigid production, even though I quite like to wing it live and mix things up. Like when Alex will call out a random song and we just start playing it, for example.

Always Ascending comes out on Friday (9 February) via Domino Recordings.