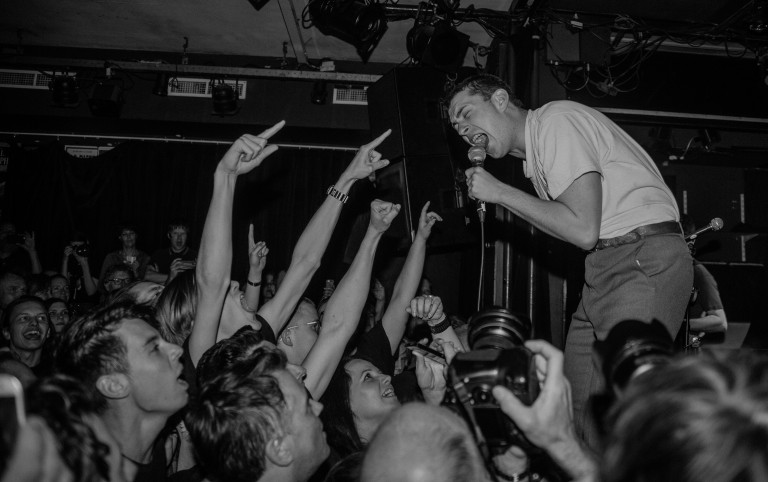 Down the Rabbit Hole will well and truly return to the leafy surroundings of Beuningen tomorrow, and to mark its fifth edition the Dutch bash has made some hefty changes. Both the Hotot tent and its famous entrance port are gone, having respectively been replaced by an open air stage and a brand new entrance. It signifies a breath of fresh air for one of the country’s most exciting festivals, one which is constantly at war with competitor Best Kept Secret. This year, one of its strongest line-ups to date has come to fruition, with Queens of the Stone Age, Anderson .Paak and Nick Cave & the Bad Seeds topping the bill. We’ve selected four non-headline performances which we believe will be key in ensuring your weekend goes smoothly.

Shame always have, and always will be, a raucous bunch. The South London post-punkers have an absolutely formidable live reputation which more often than not results in a sweaty and topless Charlie Steen towering over the crowd like a maniac on the run. Debut album Songs of Praise has already proven to be one of the year’s strongest debuts, and it’s on stage where these songs truly come to life like the sonic behemoths they are. Take the jumpy Friction as a solid example, or maybe the visceral one-two of Dust on Trial and Concrete. All three tracks form out a small part of a massive whole which will make their set at Down the Rabbit Hole irresistible.

How do you best go about describing a band like Warmdüscher? Do you mention the fact that they’re a ‘supergroup’? Do you mention their tendency to walk out of shows halfway? Or do you mention the fact that their knack for psychedelics has enabled them to make an absolutely buzzing new album in the form of this month’s absurd Whale City. Perhaps you mention all three, and then add that frontman Clams Baker Jr.’s onstage presence is a weird and wonderful sight to behold. If they manage to make it through their entire set tomorrow (unlike at Eurosonic in January, where they called it quits after 20 minutes), then consider it to be a brilliant show in the making from a band who popped up at just the right moment.

Ain’t no party like a Jungle party! The London outfit have long been hailed as one of today’s most immersive and enthralling live acts, absorbing the crowd’s boundless energy to create a sense of electric enthusiasm held together by a catchy blend of funk, disco, soul and RnB. Their self-titled debut was met with tons of critical acclaim back in 2014, with its follow-up due later this year. It’s spearheaded by lead singles House in LA and Happy Man, which do little to separate themselves from the sounds presented four years ago, but do a lot in terms of showing the world that Jungle are still a force to be reckoned with.

This is going to be an absolutely mental show. John Dwyer’s Oh Sees have always been one of the West Coast’s most batshit crazy bands, releasing twenty studio albums in as many years, all of which operate on varying degrees of chaos and utter menace. The San Francisco outfit will take to the stage on Saturday just as revellers prepare for a wild night, and what better way to ring that in with the weekend’s biggest moshpit? If The Dream doesn’t send you into a limb flailing frenzy for its six minute duration, then you’re at the wrong festival.

Down the Rabbit Hole takes place in Beuningen this weekend, and it’s sold out.