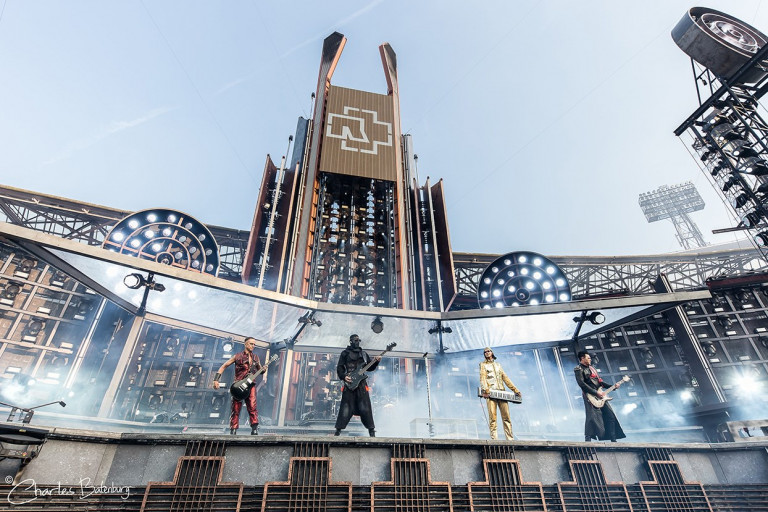 It’s not every day that you hear a loud bang emit from within the confines of Rotterdam’s iconic De Kuip. But then again, 25 June wasn’t a particularly normal day for the Dutch harbour city, as it was the day that Rammstein marked their grand return with a larger-than-life spectacle in front of some 50,000 fans. New album Rammstein is their first piece of music in ten years, and it serves as an important mission statement from a band who have not just always been at the forefront of metal, but also at the forefront of performance.

Rammstein have always had a flair for the dramatic, but it’s safe to say that this new stadium run takes that to a whole new level. The stage resembles a gigantic broadcast station, complete with multiple platforms, satellite dishes and a massive, overpowering video tower. It’s not got that same industrial feel of previous Rammstein tours, instead swapping that out for something you could suggest is a little bit, well, polished. Taking to the stage more than fifteen minutes earlier than planned, brooding new cut Was Ich Liebe added to the De Kuip’s already tense atmosphere. It’s an interesting choice of opener, ditching the chugged riffs and groove-laden beats for a pounding percussive rhythm, anthemic chorus and frontman Till Lindemann’s recognisable snarl. Although not the explosive opening some had hoped for, it did end up setting the tone for a very special two hours. The familiar march of Links 2-3-4, new favourite TATTOO and classic Sehnsucht ensured that Rotterdam enjoyed the best possible start to the night, one which continuously raised the bar. Lindemann was on top form throughout, as were the rest of the band.

You tend to notice with ‘legacy’ bands like Rammstein that any and all new material doesn’t garner the same enthusiastic response from fans as older, more popular work. That wasn’t the case in Rotterdam, though; cuts from last month’s Rammstein (their first record since 2009) were received just as well as their iconic counterparts: the gripping ZEIG DICH and minimal DIAMANT found themselves on the receiving end of as much acclaim as the likes of Heirate Mich and Mein Herz Brennt. One new song which has become even more of a fan favourite in the short month or so since the new album is PUPPE. It features some of Lindemann’s most intense vocals to date, and onstage it lends itself incredibly well to the band’s much loved theatrics, namely a flaming pushchair and bucketloads of black confetti. For a solid 45 minutes, Rammstein managed to churn out banger after banger, with no end in sight. That’s until they made the unfortunate decision to play all five minutes of guitarist Richard Z Kruspe’s DEUTSCHLAND remix. It’s quite clearly a productional filler moment, but that time could have been better spent in every possible way. Once the actual DEUTSCHLAND kicked into full gear, though, all was forgiven. The controversial new single is one of Rammstein’s best songs to date, full of blatantly striking references to Germany’s violent past, and complete with the provoking chant of “Deutschland über allen”. Controversy is one of the band’s biggest and most exciting selling points, and so what would Rammstein be without it, right?

From the moment DEUTSCHLAND’s final notes rang out, the show only seemed to hit peak after glorious peak. RADIO added some much needed bounce to proceedings, before a gruesome MEIN TEIL saw Lindemann attempt to burn keyboardist Flake to a glittery crisp. Lindemann and Flake’s psychotic interplay is a true highlight during every Rammstein show, and so it’s great to see that they’re continuing this fiery, sadomasochistic trend in 2019. Du Hast, undoubtedly the band’s biggest hit, featured fireworks racing into the crowd before rebounding and exploding onstage, with Sonne making use of as much fire as possible. And when we say as much as possible, we mean it – the stadium smelt like a barbecue afterwards. Or a spitroast, as Rammstein would put it. A rousing Ohne Dich made way for the band’s descent into the crowd, where they performed a lilting version of Engel, accompanied by support act Duo Jatekok on piano. Making their way back to the stage by inflatable dinghy, it immediately became clear that Rammstein were far from done with the gimmicks: AUSLÄNDER‘s EDM-lite synths and forceful rhythms fed into an abrasive Du Riechst So Gut and pulsating PUSSY. The latter is one of Rammstein’s only songs to be sung in English, adding a new dimension to Rammstein’s traditionally German undertones. A one-two of the brilliant Rammstein and momentous Ich Will brought the entire night to a close, with the sun not even close to setting until half an hour later. That the band had to play in broad daylight for two full hours did nothing to dampen the spirits of fans or reduce the impact of the production, because a Rammstein show is memorable regardless of the circumstances. There hasn’t been a night as memorable as this since Feyenoord won the Eredivisie in 2017, and that’s a fact. Rammstein is out now.