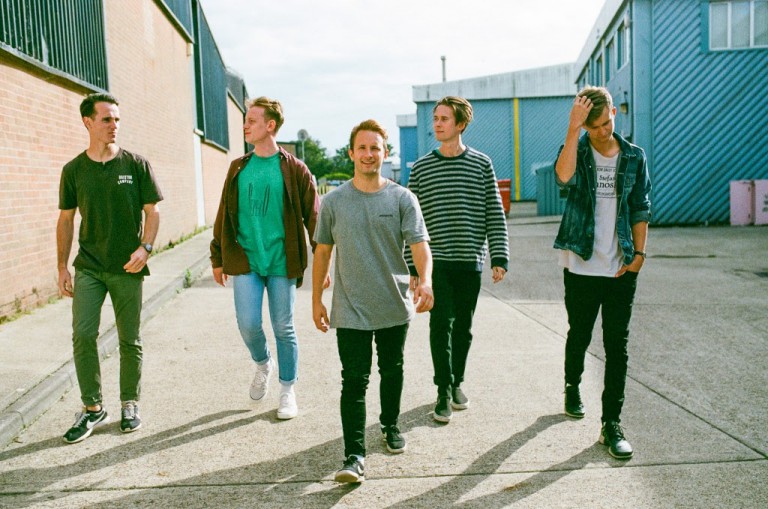 A Reflection on 2017 with ROAM

Last week, pop punkers ROAM took their energetic and frantic live show to a packed out Melkweg Upstairs in the heart of Amsterdam’s tourist centre. Janneke Stam found time to sit down with guitarist Sam Veness and frontman Alex Costello, and below you can find out what they had to say about new album Great Heights & Nosedives, progression and the future.

Hi guys! What has the response to Great Heights & Nosedives been like?
Sam [Veness, guitar]: It’s been really good so far, we’re really happy about it.

Alex [Costello, vocals]: We haven’t really had any bad comments. I don’t know if that’s a good thing or a bad thing, though.

Sam: Yeah, there’s been a lot more good comments than bad ones. We do read the reviews, we’ve read quite a lot of them.

Alex: Yeah, and when there is a bad review it’s great, we always read those ones. They’re quite funny.

Sam: We usually laugh it off. Some of them are just hilarious and seem like a personal vendetta against you, but yeah… [shrugs]

How would you say you’ve evolved as a band since your first album, Backbone?
Alex: I think we really understand more how to write a song in the best way possible.

Sam: Yeah, I’d say our songwriting has gotten a lot better. Before it was like, “there’s this cool bit so we’ve got to play it for freaking ages, it’s so sick. We’ve just got to carry on with that riff for like half the song.” And now we’re like, “no, that’s pretty boring.”

Alex: Kyle Black, our producer, helped a lot. He’d be like “ Yo, halve that section” and we wouldn’t, but then we’d realise three weeks later that it does make sense his way.

Sam: Our producer didn’t play as much of a role with the first album. We had our songs written, and that was pretty much how they were recorded. We definitely sat down a lot more with this album, picked the songs apart and a lot of them completely changed. I mean, a lot of them stayed the same, but some were just destroyed and then built up again.

Alex: We did it in a different way as well, for some songs, we recorded Sam’s guitar first and then sometimes we’d start with acoustic guitar and drums, which is a really weird way of doing it, but it worked and it was good.

What’s your favourite song on the new record?
Sam: It does change quite a lot, but since day one, mine has always been Left For Dead. It’s just a punk banger. It’s a fast, circle pit-y song, which is a lot of fun to play live for me.

Alex: I agree with him, but I’ll also say Flatline. It’s just a cool song, and it’s so much fun to play live.

What inspires you when writing songs?
Alex: I don’t know, really. This time it was just like “You have to do this, get inspired!” [laughs]

Sam: It wasn’t, like, anything in particular. With the last album we wanted to have a slow song, a fast song, we needed a heavy song, but for this one we didn’t really go in with that approach. This time round, we just wrote. It was just like “I’ve got this melody, I’ve got this, I’ve got this drum beat” and we went with it. I didn’t really listen to anything for inspiration, we just met up, jammed and it just sort of happened, really.

Did you feel any pressure, seeing as this album was released quite soon after Backbone?
Sam: Yeah, last time there wasn’t really a deadline.

Alex: They didn’t even know we were in the studio. They were like “So, you’re recording, then?” and we were like “Yeah, we’ve already started…”

Sam: For this one, there was a definite deadline. Last time, we didn’t have many tours and quite a lot of free time, so we could just do bits here and there. This time, we had tours either side of it, so we couldn’t go on any longer or start any earlier – we just had ten weeks of writing and recording and we had to get it done, because we would be on tour for the next ten weeks after that. It was quite stressful.

Alex: I remember us being in the studio and we were like “I don’t know if I like this or not,” but it all came out just right.

This time round, there are no collaborations on the album, whereas you had Set Your Goals’ Matt Wilson appear on Backbone. How do you decide on whether or not to collaborate with someone on a song?
Alex: A friend suggested that it would be sick if Set Your Goals was on this song [Deadweight] and we were with someone who knew him, so that was sick because we love Set Your Goals. We don’t really have a particular process for those kinds of things, though.

Sam: Yeah, it was just a mate of a mate and we thought it’d be cool if he sang on this song, and he was like “Yeah, alright!” For this album, we were debating whether or not we would get someone to sing on it, but we decided that we wanted to put something out that was just us.

If you could pick anyone, though, whom would you like to collaborate with in the future?Sam: You’re going to say Justin Bieber, aren’t you?

Alex: Probably, just because his voice is amazing. But I don’t think it would sound good. Maybe Ben Kotin of Such Gold, that would be sick.

We’re nearing the end of 2017, so let’s talk about your favourite albums of the year!
Sam: Ooo! Well, I just got my end of the year thing from Spotify, have you seen that? That really helps. We listen to, like, the heavy stuff. We listen to metal, metalcore and hardcore.

Alex: We’re going to put Wage War on the table, and Gideon’s new album. I think they both came out this year, right? Err, Northlane too.

Alex: I like our album! Seaway’s album is pretty sick. Oh! Zara Larsson!

Sam: That wasn’t this year, but it was a cracking album. Very not pop punk.

On a more serious note, I couldn’t help but wonder how, if at all, the recent accusations of sexual assault in the music industry have affected you? Has it changed the way you interact with fans?
Sam: It’s not nice. Some of these accusations have been about friends of ours, so that’s never nice to hear. It just sucks, because these are people we know and have spent time with, unfortunately. Well, some of them. It hasn’t hit super close to home for us personally, but it is a shame. It puts a bad light on our scene. It’s always been quite a positive scene, because a lot of the music is very positive and has a happy outlook. It’s a shame to have it stained with this sort of stigma at the moment. It hasn’t changed the way we interact with fans, though. We’ve always been very careful, and we’re not going to stop meeting fans and talk to them.

Carrying on, you appeared on the Warped Tour last year and you’ve also supported bands like New Found Glory. What are your main takeaways from playing those kinds of shows with those kinds of bands?
Sam: Well, I think New Found Glory are a really inspiring band. They’re doing their 20 year anniversary tour and they’re still going strong, and they do it so well. They play a one hour and 40 minute set every night and go hard, playing two albums back to back.

Alex: Yeah, they have more energy than us!

Sam: They put us to shame, and they’re like 15 to 20 years older than us. Like, fuck, that’s so sick. They were super inspiring to tour with, for me. Warped Tour though, I can’t believe it’s ending. It really sucks. I’m really grateful that we managed to do it at least once. It’d be killing if we never got the chance to do it, as it was one of my main goals when I was a kid.

Alex: I didn’t really know about Warped Tour until I heard about it in that Blink-182 song. I feel like that gave it such a big boost as well. I don’t think they’re going to stop it completely, though. They might come back a few years later, I don’t know.

Sam: I reckon people will miss it. I think that if you did it every two years, it’d have more impact. Like the World Cup and the Euros, it’s so much sicker because it’s every two years and it’s not like, “Oh, here we go again.”

So that’s one thing you got to check off your bucket list, then. What would be next, if it were up to you?
Sam: Honestly, we’ve done some mental tours in some crazy countries. I think that now, for me, it’s just South America, that would be sick. Maybe South East Asia. We’ve done American tours, Japan, Warped Tour and Australia, so we’ve been very lucky.

Alex: For me probably the same, I just want to go everywhere in the world. I’d like to go to Arabia and stuff to do shows, because bands never do it. I think Northlane did Israel as well. I’d like to do Qatar or something like that. Dubai even.

Sam: The places that bands never go to, basically! We’re stupid enough to go to these places.

Alex: Stick To Your Guns went to Kenya, and I think Parkway Drive did India. Stuff like that would be so cool.

That would be sick. But finally, what are you up to in the foreseeable future?
Sam: We’ll announce a cool tour, maybe.

Alex: What are you on about? Oh, right. I had to think which one it was.

Sam: It’s going to be more touring of the album around the globe. We’re going to Australia with Knuckle Puck and Stand Atlantic, which will be a cool package. That’s pretty soon, a month from now. We’ve got three weeks at home, I just realised, and then we’re going to Australia. It’s going to fly by. I don’t really know the rest yet. Probably more touring of the album, getting it out there and getting everyone to freaking hear it!

Great Heights & Nosedives is out now via Hopeless Records, and you can stream it below.