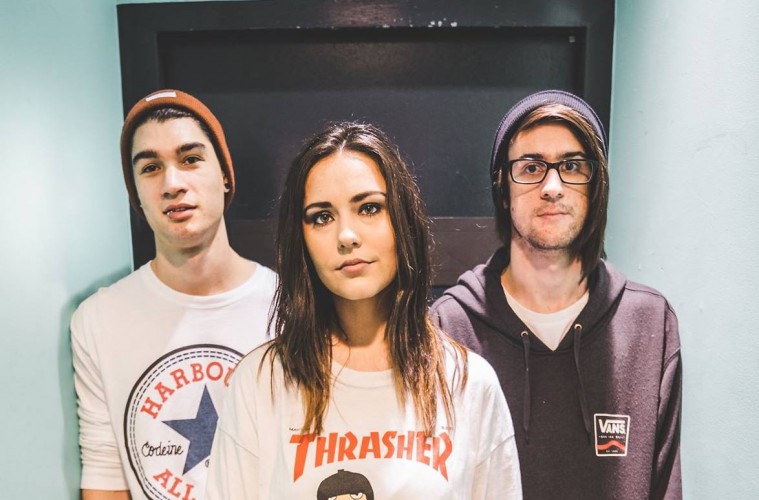 A Reflection on 2017 with Stand Atlantic

It’s safe to say that pop-punk has had a very strong year. Whether you look at it from a local, up-and-coming perspective or if you adopt a more established point of view, there’s been plenty of great music to help you get through the year. Last week, Janneke Stam sat down with Aussie outfit Stand Atlantic to look back on what’s been a very positive year for the Sydnesians.

This has been quite an exciting year for Stand Atlantic. Could you briefly run me through your 2017?
Bonnie [Fraser, vocals/guitar]: Yeah, sure! So, we signed to Rude Records, which was crazy for us. Then we toured with New Found Glory, before we even released our EP Sidewinder, which was really interesting. The feedback has been amazing and beyond anything we ever expected. And now we’re in fucking Europe with Roam, so it’s sick!

David [Potter, bass]: It’s way more than we expected to get just off of one EP, because it’s usually bands with an album out that get to do these things. Like, we have five songs, we barely have enough to make a set – we have to throw old songs in there and whatnot!

Bonnie: So yeah, it’s been a good year.

This isn’t the first EP you’ve released, though, as I read something about an EP called A Place Apart. Would you say the recording process differed a lot this time round?
Bonnie: Yeah, that was a demo EP. You can’t really find that anywhere – maybe on the deep, dark web. This time though, with the writing, we’ve really stepped it up. We really focused on making good songs as a whole, instead of focusing on “Oh, you’re a lead guitarist, you should have a shreddy part here, show off your skills!” It was more the song as a whole and the vocals, melodies and stuff.

David: I think that one of the biggest differences with this one was working really closely with our producer Stevie Knight. We’d decided that we wanted him to be there for the songwriting, because we always come in with so many ideas and can never figure out which ones are good and which ones aren’t, or which ideas we should be focusing on and in what direction a song should be going. Stevie’s really good at that; you can just give him a bunch of ideas and he’s like “Nah, these ones are shit, these ones are good. Here’s how we’re going to build the song around it.” He’s just a really good person to get in a good headspace with.

So what inspires you when writing songs?
Bonnie: Oh, just life… Shit that happens to you and you’re like “Man, why? Why did you do that?” or like “Why did I do this?” That kind of thing – just feeling shitty. Or feeling really good!

What’s your favourite song on the EP?
David: I’ve always said Coffee At Midnight, just because for so long  I wanted to be one of those punk beat bands and we finally got to put a punk beat on this record for once. It’s the most fun part of the set, to play that live, because I don’t even really have to play anything. I just kind of throw my guitar around and get loose.

Bonnie: I’d say Chemicals, because that was the song which pushed us the most in terms of songwriting, and lyrically I pushed myself more than I did with other songs.

We’re getting close to the end of the year, so what would you say your albums of the year are?
David: Obviously the band we’re here with, Roam, Great Heights & Nosedives. I’m not just saying that because we’re on tour with them, it legit has been one of my favourites of the year. The other one came out at a similar time and also has a similar kind of style – Vacation by Seaway, I think it’s a really good album. Then my third one would be The Rhapsody Tapes by Ocean Grove, they’re this Melbourne nu-metal band and I’ll say this in every interview, because I’m so glad someone’s finally bringing back early 2000s era nu-metal. It’s been far too long!

Bonnie: I really liked Grayscale’s album and I really liked Paramore’s album. I thought those were really cool, they just fucking knocked it out of the park with those.

So no Taylor Swift or something like that, then?
David: Not her new one, no. I didn’t like Reputation, but if you had asked me this in the year 1989 came out, that would’ve been number one. Yeah, and I think Purpose came out last year, you know, Bieber. Probably also would’ve been in my top three.

Bonnie: Also blackbear’s album digital druglord. I think he’s got another one out already…

David: I don’t feel like this year’s been as good for pop music as the years preceding it. There were some great pop albums out last year – Bruno Mars’ 24K Magic, that was brilliant. Anyway, we got Roam this year, so it’s better.

I wanted to talk to you about the recent accusations of sexual assault against band members, if that’s okay. Seeing as it involves several bands in this scene, has this affected you in any way?
David: It might be a weird thing to say, but you can almost see it as a good thing, because it means we’re finally getting rid of these people. Those people have always been around and others are beginning to come out now and say “This isn’t alright, we need to say something.” I think it’s a good thing not having those people in the scene. As much as some of them could be great musicians – you don’t need these people; it’s better without them.

Bonnie: I think it’s just showing that, looking at the people who are doing these things and people who are affected by these things, we really need to be careful with everything we do. If you’re unsure about anything, just don’t do it. That’s what I take out of it. Just be safe, always.

On a lighter note, this is your first European tour. Have you had any time for some sightseeing?
Bonnie: This is our first time we’ve ever left Australia, so it’s crazy.

David: We try to do touristic stuff every day. Wherever we are, we always try to get the national dish – my favourite thing so far was probably the weird potato and sheep cheese dish we had in Slovakia. When we’re going to go back to Australia, I just know I’ll be like “Dammit, I can’t find this dish anywhere!” The beer in Slovakia was also really good. Everything in Slovakia was just way more fun than I expected.

Bonnie: On this whole tour we’ve tried to see the main attractions, but I swear all of them just had scaffolding all over them. I’m not even kidding.

Could you name a few items on your bucket list?
Bonnie: I always thought it would be cool to do a headline world tour. And I really want to go to Japan. Really, really badly.

David: Oh, Japan definitely. Anyone who’s booking for Japan, please contact us! I was also going to say Warped Tour, but that’s dead now. R.I.P. In my dreams. I think that there probably will be some kind of replacement in the future, so whatever that is, I hope to do that.

And finally, what is next year going to look like for you?
David: Lots of writing, lots of touring.

Bonnie: Yeah, that’s pretty much it. We can’t really give anything away just yet, but we’ve been working on some stuff and we’re always writing. We’ll probably go into the studio. We’re trying for an album.

David: You always want to do that. That always does like it should be the next step, but it’s a lot more work than an EP and depending on what our touring schedule’s going to be like and whether we’ll actually have time for an album… We’ve already started writing for whatever we do next and there are already some songs there, but we’ll see…