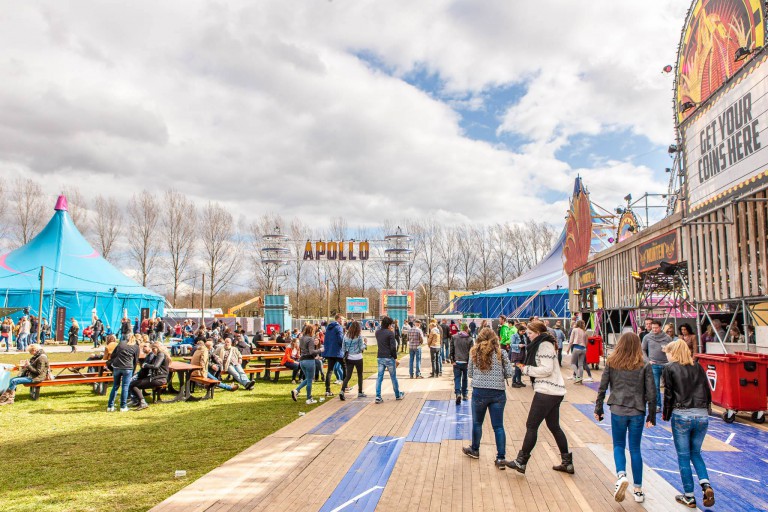 Following two extremely exciting (but cold) days, Paaspop Festival finally came to a close last night on what was a day filled with variety, eclecticism and fantastic live sets. There may have been a slight hint of stormy weather later on in the evening, however it stopped nobody from living out their final day in Schijndel to the fullest.

The Dutch singer-songwriter Lakshmi opened the day on the Jack Daniel’s Stage, with her set accompanied by her live band and a small selection of string players. Just like with their live session (sans string players) later that day, Lakshmi pulled off an extremely exciting set filled with slight hints of dark indietronica and rock. Lakshmi are definitely a band to look out for, something which 3fm Megahit Champagne demonstrated in particular. Amsterdam trio Bombay pulled off two similarly exciting sets later that day, with new drummer Lisa Ann Jonker having finally found her place after replacing former percussionist Linda van Leeuwen late last year. Both Lakshmi and Bombay are acts who you ought to keep an eye on, because they’re two of the most exciting things to come out of Holland in quite some time.

As the day progressed, it became continuously evident that all acts appearing on the Jack Daniel’s Stage possessed bucketloads of potential. Bristol quartet The Jacques performed a musically tight set in front of a half-full tent, something which frontman Finn Jacque made note of during his rather unenthusiastic between-song musings. “Thanks for doing whatever you did out there” declared the uninterested looking guitarist ahead of standout track The Artful Dodger, a song which is perfectly suited to indie disco’s the world over. They may not have amassed a massive following, but it doesn’t look like this will be an unlikely occurrence in the future. Den Haag outfit St. Tropez (previously known as Go Back to the Zoo) followed them up, showing the near-full tent how garage rock should be done. Employing hints of sunny, Californian sludge and punk, St. Tropez seemed like a breath of fresh air in a Dutch music scene which is currently any one of the following three things: 1) summery pop (Jett Rebel et al), 2) dark indietronica (HAEVN et al) and 3) dull singer-songwriter music (hi, Ilse DeLange and Douwe Bob). Later on in the day, Californian garage rockers Meatbodies took to the stage and showed everyone how real Americans get things done, almost as if they were sent down by the modern day god of sludge, Ty Segall. There was also room for some rock ‘n roll in the form of JD McPherson, as well as some extremely in-your-face blues rock courtesy of Birth of Joy, the band who never fail to impress. As with the festival’s two preceding days, the Jack Daniel’s Stage proved that it was capable of presenting festivalgoers with the best raw, young bands out there today.

Over on the Phoenix Stage, crowds appeared in their droves for an evening of upbeat rock from all walks of life. Hollywood Undead performed a career-spanning hour-long set during the early evening, with the mask-clad sextet opening their set with the powerful one-two of Usual Suspects and massive hit Undead. The latter, as with most of their tracks, encompassed hints of nu-metal, electronica and hard rock, a combination which was deemed ground-breaking during the band’s 2000s heyday. The likes of Party By Myself and set closer Hear Me Now were two further highlights in the show, proving to Paaspop that, however unorthodox the booking, Hollywood Undead are a band still worth taking somewhat seriously. New Jersey sludge rockers Monster Magnet followed them on the same stage, pulling off an hour filled with stoner rock and grunge-y sludge metal. Their set made out part of a tour which is currently celebrating the A&M Years, a stint of eight years from 1993-2001 in which the band released four well-renowned records. Once their set came to an end, it made way for returning Swedish hardcore heroes Refused to perform one of the weekend’s best sets. Although it was attended extremely poorly (the tent was roughly half-full), something which frontman Dennis Lyxzén laughed about with hints of subtlety. Despite the poor turn-out, though, Refused made the most of what was at their disposal and subsequently tore the Phoenix to figurative shreds. At times, Lyxzén was diving in and out of the crowd as his band ripped through an hour of fine-as-hell hardcore. Set highlight New Noise (taken from 1998’s The Shape of Punk to Come) made for a huge circle pit, and was preceded by an inspiring speech from Lyxzén. He spoke of wanting to make a difference in the world, asking if the crowd if they “wanted to be that change”. Performing on a stage bathed in strobes and smoke, it was often hard to make out the band, something which added to the mysterious attraction of their whole show. Refused performed one of the best sets of the weekend, absolutely refusing (pun unintended) to be bothered by the poor turn-out to their show head-on.

As people streamed out of the Phoenix, an Underworld DJ set was the only thing which separated festivalgoers from their re-entry back into the real world. Paaspop has proven to be a successful opener to the festival season, providing a line-up so varied that two individual people could have attended completely different things from one another and still have the time of their lives. Add the Las Vegas-theme to that and you have a festival which is slowly becoming one of Holland’s most intriguing weekenders. Next year, the festival will take place in April, something which can only be good for the amount of touring international artists who’d want to descend on a farm in the countryside for a few hours. Paaspop’s team can be proud of themselves for putting on a fantastic party in the middle of Brabant for three days, with festivalgoers totally not even bothered by the dreary weather conditions. Here’s to an even bigger 2017.

Keep an eye out for our Paaspop Top 20 this coming week.