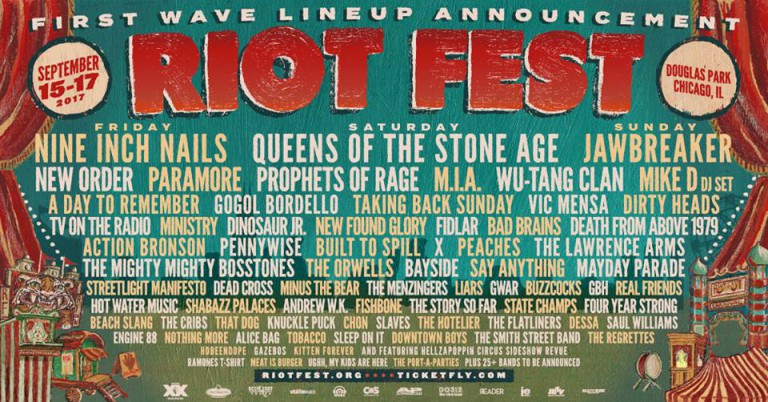 Riot Fest 2017: Six Recommendations For the Heaviest Weekend of the Year

Next weekend, one of the American festival calendar’s most exciting weekenders will finally open its doors and help the nation bid farewell to another successful festival season. Figured out what we’re talking about yet? Riot Fest, obviously. The well-renowned festival never fails to put together a star-studded line-up (above) filled with the biggest and best artists alternative music has to offer, throwing in some curveballs at the same time for good measure. We’re closing out a busy summer of festival coverage in the beautiful Chicago next weekend, and to help you get hyped up we’ve selected six of Riot Fest’s most exciting acts.

NEW ORDER (Friday – Roots Stage – 7:10-8:25)
British electro rock pioneers New Order may have emerged from Joy Division’s ashes back in the 1980s, but it’s never stopped them from leading a life of their own throughout the last thirty-odd years. The Bernard Sumner-fronted Manchester outfit have spent the last two years touring in support of 2015 release Music Complete, a record filled to the brim with four-to-the-floor beats, rhythmic percussion and hypnotic vocals. Their set on the Roots Stage will most likely soundtrack your sunset in most celebratory fashion, so don’t miss out.

NINE INCH NAILS (Friday – Riot Stage – 8:30-10:00)
Nine Inch Nails are back, and Trent Reznor and co. still don’t plan on taking any prisoners. The Reznor-helmed project hasn’t released a full LP since 2013’s grisly Hesitation Marks, although two recent EPs (2016’s Not the Actual Events and the more recent Add Violence) have shown the world that nothing seems to have really changed at all. The music is still grim, the live show is still electrifying, and the air of mystery surrounding every step Reznor takes is everpresent. If you’re looking for anthemic stadium rock, then you’re in the wrong place; an evening with Nine Inch Nails is one where you stand back, watch and eventually contemplate your own existence.

FIDLAR (Saturday – Riot Stage – 4:15-5:15)
Punk! Beer! Weed! What more do you honestly expect from everyone’s favourite rowdy garage punkers? FIDLAR have just one aim, and that’s to incite chaos wherever they go and leave no stone unturned. Don’t believe us? Then just watch this.

QUEENS OF THE STONE AGE (Saturday – Riot Stage – 8:45-10:00)
Josh Homme is back, with he and his men in Queens of the Stone Age having just put out the masterful Villains. It’s a record full of demented, funky riffs and licks, ass-on-the-dancefloor rhythms and Homme’s ever-haunting voice. From the opening disco grooves of Feet Don’t Fail Me to The Evil Has Landed‘s utter chaos, Queens of the Stone Age will set Riot Fest on fire in a way only they know how. Expect new anthems, classic hits and deep cuts as 160,000 Chicagoans play witness for the Kings of the Desert.

AT THE DRIVE-IN (Saturday – Roots Stage – 7:40-8:40)
When At the Drive-In announced their long-awaited comeback in 2016, many wondered whether Cedric Bixler-Zavala and co. could really cut it all these years later. Needless to say, the Texan hellraisers proved everyone wrong and eventually emerged with the manic interalia, an album which has gotten their previously dead and buried career right back on track. There shouldn’t be much reason to avoid them when their live show stops by Chicago next week, so what’s stopping you?

PROPHETS OF RAGE (Sunday – Roots Stage – 7:40-8:40)
Everyone loves a good supergroup, and we’re pretty sure that Prophets of Rage are the hottest one in town right about now. Consisting of Rage Against the Machine, Cypress Hill and Public Enemy members, the sextet combine effortlessly flowing vocals (courtesy of the famed Chuck D and B-Real) with the sweet sounds of old-school hard rock and Tom Morello’s vicious guitar lines. Expect them to draw heavily from their upcoming debut album (due 9/15), but don’t take this as a sign that they’re ditching the classics; on the contrary, because for every new track you can expect a whole host of familiar hits. One of them goes a little like this…