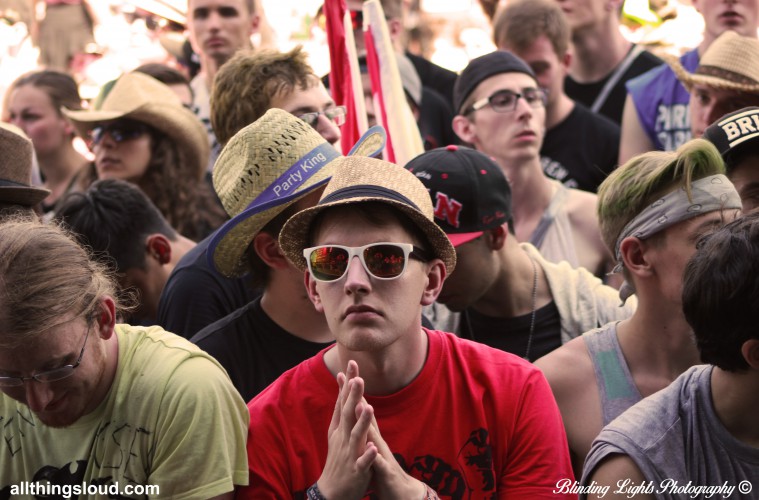 This June, Rock Am Ring will be celebrating its second edition since relocating from the famous Nurnburgring. Since last year, the festival has taken place at Mendig’s massive Flugplatz, with the first edition featuring celebrated performances from Foo Fighters, Motorhead, Enter Shikari and Slash. This year, the festival will grow even more and see the likes of Volbeat, Black Sabbath and Red Hot Chili Peppers take to the stage. We’ve taken a detailed look at the line-up and outlined a handful of non-headlining names we think you should definitely not miss in Mendig this summer. Motorhead’s Lemmy, who passed away in December.

BIFFY CLYRO
Scottish trio Biffy Clyro are currently on the cusp of glory, with the upcoming follow-up to 2012’s Opposites set to see them become even bigger than ever before. During the previous album campaign, Simon Neil and his band managed to reach the peak of Reading & Leeds’ bill, with the likes of the 02 Arena and huge venues across Europe also being left in Biffy’s destructive path. By the time the band take to the stage in Mendig, the new record won’t be out yet (December is currently the biggest rumour), but we can still expect an absolute masterclass in how to rock out grandiosely. Biffy Clyro are festival headliners of the future, and their Rock am Ring set will show you why. DEFTONES
In April, Deftones will release their hotly anticipated new album Gore, the group’s first in four years. Lead single Prayers/Triangles has been met with extreme critical acclaim, meaning that the rest of the record can only see Chino Moreno and co. sound even better than before. Not that this will be easy, though. 2012’s Koi No Yokan was a masterpiece in its own right, topping year-end lists the world over thanks to the likes of Swerve City’s pulsating bass and Entombed’s eerie undertones. When Deftones take to the stage in Mendig this year, you can be sure of a set filled with exciting new tracks, all of them standing out in and amongst Deftones’ menacing back catalogue. FOALS
Foals are one of the UK’s biggest success stories of the last ten years. Having started out as a small-scale indie outfit, Yannis Philippakis and co. have now morphed into a behemoth worthy of selling out arenas the world over. Although their arena-status is right now UK-exclusive, the band have just rounded up a European tour which took in the likes of Amsterdam’s 5,500-capacity Heineken Music Hall. Rock am Ring will be a whole new situation for the Oxfordshire quintet, especially when you take explosive 2015 record What Went Down into consideration. Foals will make Mendig dance until they can no longer move, there’s no doubt about that. THE 1975
Although Rock am Ring is primarily a heavier rock festival, you’d be a fool for thinking that adding poppier bands to the line-up has been a stupid mistake. Last year, Bastille pulled one of the biggest crowds of the weekend to the festival’s main stage, with The 1975 hoping to do the same this June. New album I Like it When You Sleep For You Are So Beautiful Yet So Unaware Of It may be an exercise in ego-expansion, but it’s also Matt Healy and co.’s defining statement. The likes of the INXS-infused Love Me and The Sound’s house-meets-pop rhythms may be a world away from Rock am Ring’s dominating rock and metal, but it’ll certainly be a nice main stage breather.

OF MICE & MEN
Every year, Rock am Ring introduces a more varied range of top-level metalcore, with 2016 no different. Performing their only European show of 2016 are Mesa’s Of Mice & Men, who are currently hard at work on their fourth studio album. The follow-up to 2014’s Restoring Force is set to be their best record yet, encompassing more of their modern day nu-metal influences and Austin Carlile’s raw vocals. They performed a storming set at Rock am Ring in 2014, later touring the world over twice and re-packaging Restoring Force with three new songs. Who knows, the band may even play a few new songs come June. It would be a nice surprise, though, wouldn’t it? BILLY TALENT
Completing our first list of recommendations for Rock am Ring 2016 are the returning punks in Billy Talent, who have spent some time away from the limelight. A new album is expected from the group, although a release date hasn’t been set just yet. Instead, the band will first be playing a handful of summer festivals without the assistance of drummer Aaron Solowoniuk. Alexisonfire’s Jordan Hastings will take his place as the band take their fresh brand of punk, post-hardcore and alternative rock to Mendig this year. If you don’t find yourself in a moshpit when Billy Talent take to the stage in June, then you’re clearly not doing it right. Check back soon for a second round of recommendations. Rock am Ring 2016 takes place from 5-7 June at Flugplatz Mendig in Germany.