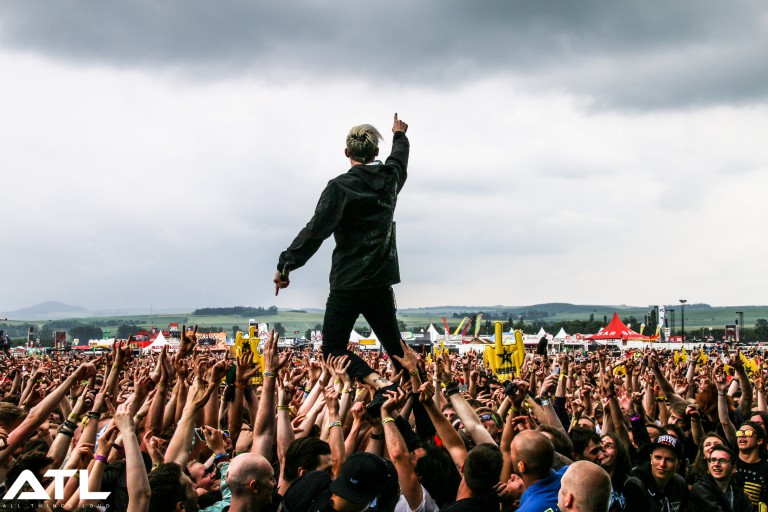 With the sun shining ever so slightly more than each preceding day, it can only mean one thing: festival season is approaching, and it’s set to be even bigger and better than ever before. Here at All Things Loud, we’re going to be bringing you coverage of Europe’s biggest festivals for another successive summer. In order to whet your apetites for the Summer of 2017, we’ll be placing plenty of focus on the biggest and best events Europe has to offer, starting with the symbolic summer kick-off party: Rock am Ring. Following a disappointing edition in Mendig last year, the festival has finally returned to its famous Nurburgring race track. We’ve outlined five acts that you can’t miss in Germany this June. AIRBOURNE
Aussie rockers Airbourne have spent the last few years shaking off the endless AC/DC comparisons with their manic brand of headbang-worthy hard rock. On record, they may sound like your standard hard rock outfit with a screeching frontman and pulsating rhythm section, but onstage they’re a whole new beast with a knack for beer-fuelled antics and all sorts of chaos. Their set at Rock am Ring is guaranteed to provide more than just anthems; in fact, it may even provide you with the set of the weekend. BEARTOOTH
The Caleb Shomo-fronted Beartooth seem to only go from strength to strength. The Ohio quartet, who put out the superb Aggressive last year, are a constant force to be reckoned with thanks to Shomo’s constant bouts of onstage energy. His band are just as mad, taking on riff after riff to produce a cacophony of manic drops and whirring breakdowns. If everything falls into place this June, then Beartooth should be able to provide festivalgoers with enough energy to last a full weekend. DEAD!
Chances are that you probably haven’t heard of London hellraisers Dead!, but chances are also that this will probably change between now and September. Why September, though? Because that’s when the quartet put out their long-awaited debut album. The album, which has just been preceded by lead single Enough Enough Enough (listen here), looks set to encompass a whole load of brilliant riffs, caterwauling rhythms and anthemic vocals. This summer they’re hitting some of Europe’s biggest festivals, so don’t let their low billing at Rock am Ring deter you from finding out exactly why Dead! are worth the hassle. SIMPLE PLAN
Simple Plan have plenty worth celebrating this summer, with their seminal record No Pads, No Helmets, Just Balls… turning the ripe old age of fifteen. The classic pop-punk record was a genre-defining piece of work back in the day (2002, for those wondering), with the recent resurgence of pop-punk giving the album an extra ounce of relevance. Pierre Bouvier and co. will be touring Europe throughout the summer in order to remind everyone that they were initially one of the genre’s frontrunners, so make sure to find yourself on that racetrack in June in order to bounce like it’s 2002. SYSTEM OF A DOWN
System of a Down are back, and what better way to mark their live return on European soil than with a headline set in one of the countries which has shown immense love for them – Germany! Serj Tankian and his comrades will top the bill at the Nurburgring in June alongside fellow headliners Rammstein and Die Toten Hosen, making them the biggest international name on the whole bill. When it comes to bands of this calibre, there really is little convincing to do. Just be there, and don’t ask too many questions. Check back soon for another set of recommendations for Rock am Ring. The festival takes place from 2-4 June in Germany. Get your tickets here.