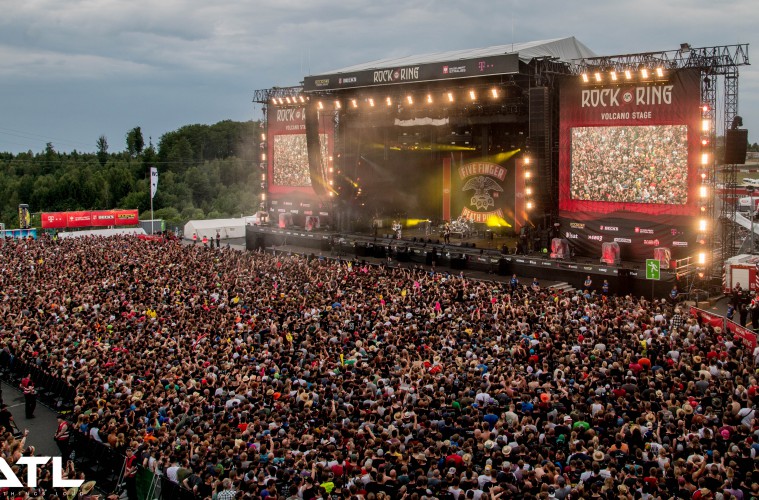 It’s not been a good twelve months for German mega-festival Rock am Ring. Last year, the weekender (then in its temporary new location of Mendig’s disastrous airport) got called off after a day and a half of music, a decision based on the horrific weather conditions and some thirty hospital-bound festivalgoers. The MLK/Live Nation festival subsequently powered on in order to deliver a 2017 line-up which, despite the obvious cut in artist budget, still sits amongst one of their strongest to date. Fast-forward to 2 June, when the festival made its grand return to the Nurburgring, a sight which one can only associate with Rock am Ring. Unfortunately, though, its return to ‘The Ring’ didn’t go as planned; in fact, the terror threats which ensured that the first day ended abruptly are likely a first for festival world and just another shocking revelation about the state of the world in which we live today. Festival organizer Marek Lieberberg interrupted German punk act Broilers’ main stage set with the news that an imminent terror plot had been uncovered, which meant that some 80,000 festivalgoers had to be evacuated away from the festival grounds. In a later press conference, Lieberberg emotionally rallied in the face of terror, with organizers today (3 June) announcing that the festival will resume proceedings on schedule. Despite all of this drama, the festival did experience six hours’ worth of memorable sets and a spectacular atmosphere which could only go on to show that the so-called ‘Ringrockers’ are not afraid of terror, and will stand defiantly in its face. Essex outfit Don Broco opened the Crater Stage just after 3pm, having signed to new label SharpTone Records recently in anticipation of the new studio album they’re gearing up to start work on. Opening the set with the pulsating Everybody, frontman Rob Damiani clearly didn’t seem fazed by the low turnout as he and his bandmates gave everything they got to the German crowd. New single Pretty proved to be a highlight, with Damiani instructing the sparse crowd to form a wall of death ahead of the track’s brutal onstage breakdown. It proved a pivotal moment in the set, one which presented Don Broco as a band whose capabilities and potential reach far and beyond the small Crater Stage crowd. Anyone absent missed out, because Damiani and co. are going places, and they’re prepared to take them with you. Fellow Brits Dead! took on their largest European festival date ever with plenty of swagger and charm, ensuring that all in attendance at the Alternastage acquainted themselves with a band they wouldn’t be forgetting all too soon. Frontman Alex is a force to be reckoned with as he bounds about the stage with plenty of aplomb, blaring out his lyrics like a man with a vengeance. His bandmates are just as rowdy, running around and interacting with one another as well as the crowd for the duration of their forty-minute set, which saw an early highlight in the form of older track Skin. It’s rhythmic stabbing and stadium-ready chorus are unlike any other, and it only forms a small part of the whole that is Dead!, your favourite new band. Over on the Seat Volcano Stage, Welsh metal outfit Skindred incited the first bouts of chaos with a set which saw the famous race track filled from front to back. Frontman Benji Webbe gave the German crowd a passionate speech about hatred and racism, eventually uniting the masses in song. It was a set which really kickstarted the day’s energy, with Swedish giants In Flames following them on the same stage not too much later. The set bordered on the brutally ferocious, something which should never go amiss when Anders Friden and co. are in town. New album Battles featured heavily, and quite rightly so; it’s In Flames’ defining piece, and a pivotal moment in time for a band who are on the cusp of glory. Taking on the mid-afternoon Crater Crowd were Pierre Bouvier and his mates in Simple Plan, unfortunately sans bassist David Desrosiers. The band are still doing the rounds all these years later, with 2017 in support of seminal album No Pads, No Helmets…Just Balls‘ fifteenth anniversary. Set opener I’d Do Anything turned the energy levels up to 11 from the off, with the connection between Bouvier and the packed crowd absolutely electric and palpable. Newer track Jump received just as much of a positive reception as older hits like Welcome to My Life, proving that Simple Plan have just as much longevity as Arsene Wenger. The Ivan Moody-fronted heavy metallers in Five Finger Death Punch gave the Seat Volcano Stage an hour to remember, hammering home their immense German popularity with a set which proved that, if anything, Ivan Moody is going nowhere. As the day approached its abrupt end, British crooner Rag’N’Bone Man appeared in front of a decent crowd on the Crater Stage, putting a face to the voice many had heard on the radio throughout the last half year. Breakthrough hit Human featured, as well as its equally successful Skin. What Rag’N’Bone Man lacks in stage presence, he certainly makes up for in the sheer immensity of his strong vocal tone. He’s a charming lad, and there’s definitely a big future out there for him somewhere in the great big mindfuck we like to refer to as the music industry. Rock am Ring will resume today (3 June) with sets by Sum 41, Beartooth, Pierce the Veil and Sleeping With Sirens. Find a selection of shots from the festival’s opening day below.