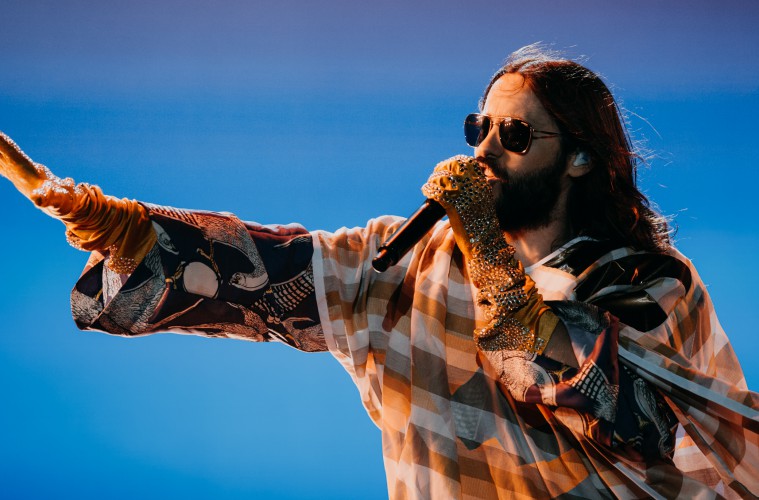 With baited breath, 70,000 German revellers descended upon Rock am Ring with one relatively important question: will everything go to plan? You see, the last few years of Rock am Ring have been marred by a handful of unfortunate circumstances, whether it be torrential thunderstorms, cancellations or false terror threats. These incidents have made the famous German weekender become a doubtful occasion for trusty visitors, most of whom are willing to take the risk and return to the famous race track once more. Yesterday, for the first time since 2014, Rock am Ring’s opening day successfully experienced not a single drawback or unfortunate moment, resulting in a packed festival day which had plenty for the Nürburgring masses to feast their eyes upon.

The first main attraction came in the shape of Greta van Fleet, a band who many claim to be the heir to rock music’s throne, a band who can do it all. Over the course of their thirty minute set on the Volcano Stage, they proved just that with a blistering mix of Led Zeppelin-esque rhythms, slick guitar work and pummelling percussion. It’s no wonder that their hit track Highway Tune has received so much praise, because live they take it to the next level in a way which most of their forefathers would revel in. If Led Zeppelin had been touring today, Greta van Fleet would be out there on that road with them, slowly taking the reigns. Irish pop rockers Walking on Cars followed on the same stage, pulling a slightly larger crowd due to the gradual lack of threatening clouds and heavy rain (which powered on through the night prior). Frontman Patrick Sheehy most definitely knows how to work a crowd, doing so in slick style as he switched between an acoustic guitar, drum pads and trips up and down the catwalk. The crowd clearly loved it, with each song kicking up the emotional intensity by a few notches before culminating on a powerful Speeding Car. There’s a second album on the way, and if their Rock am Ring live set is anything to go by then it could be an incredibly vital next step for the group. Over on the Beck’s Crater Stage, German metallers Callejon pulled a large crowd, entertaining them with their intricate guitar lines and powerful rhythms. They’re the kind of band who seem to be a staple at every German festival, but judging by the crowd this doesn’t seem to be much of an issue. This Crater Stage crowd only grew by the minute ahead of Japanese pop metal collective Babymetal, a group who manage to divide metal fans just as much as they attract new ones. The live show is centred on a so-called metal resistance, featuring dystopian warrior dances (choreographed to the millimeter, as you do) and mysterious outfits which looked like something out of a lost Doctor Who episode. New single Distortion is the first track to be taken from their upcoming new album, although it quickly became evident that the majority of the set would not place much focus on it, save for fellow newbies Tattoo and Road to Resistance. It was fan favourite Gimme Chocolate!! which garnered the biggest reception, with fans left right and centre (plenty of whom were in costume) going wild. If Distortion is a solid indicator of Babymetal’s conceptual sophomore album, then fans will most definitely be in for a treat. Korn frontman Jonathan Davis followed on the same stage, treating a smaller crowd to cuts from his first solo release: Black Labyrinth. Although its sound is widely removed from Korn’s brash and abrasive nu-metal, it still carries that dark fervour which Davis’ grisly vocals possess. His nine song set featured just one Korn song, the Disturbed collaboration Forsaken, with the remaining eight centring solely on Black Labyrinth’s cinematic tones. It’s interesting to see the frontman of a popular band go solo and avoid any of his biggest hits, and it’s a risk which was worth taking. Speaking of risks, Enter Shikari were the next band to grace the Crater Stage. Rou Reynolds and co. are the kind of band who thrive on taking risks and descending into the unknown with no clue on what to expect, and 99% of the time it pays off. Their set at Rock am Ring marked the band’s first festival of 2018, and it’s safe to say that it proved to be one of the day’s best performances. Live music is never meant to be note for note perfect, and nerves are never absent (just ask Reynolds); live music is meant to be real, and it’s meant to show the world who the real people are behind the music. The packed crowd lapped it up from the moment the band kicked into opener The Sights, its ‘woke pop’ constructions sending crowds into a frenzy long before the first old school hit made its way through the PA. Over the course of an hour, Enter Shikari managed to keep the crowd on a constant stream of second guesses, with Reynolds bounding about the stage like a spastic chicken (in the best of ways). He’s so incredibly good at working a crowd, engaging with everyone in his sight from the word go. Set highlight Destabilise made a long-awaited return to the band’s show, featuring alongside new cuts Rabble Rouser and Live Outside, as well as a medley of older hits. This medley came in the shape of a Quickfire Round, in which the band played four songs in eight minutes: Sorry, You’re Not a Winner, Sssnakepit, …Meltdown and The Jester. Energy levels never stagnated for the course of these eight minutes, much less for the rest of the hour. There’s a reason why bands like Enter Shikari will remain iconic and constantly return to the biggest stages, and their set at Rock am Ring was a great example of this. For those who didn’t find solace in Enter Shikari’s mental live show, there was plenty going on elsewhere. German rap outfit Summer Cem took on a meagre Alternastage crowd with their eclectic mix of trap and hip hop, whereas British indie rockers Alt-J also struggled to pull a sizeable crowd to the Volcano Stage with cuts from introverted new album RELAXER. It’s a record which has managed to sustain the trio’s status as incendiary live band, although the choice to book them in the midst of daylight is rather questionable. Awkward bookings aside, Joe Newman and co. did impress musically, in particular on Taro, a highlight from their debut An Awesome Wave. It wasn’t a set which people will remember for years to come, but it did serve as a reminder that Alt-J are still a pivotal band for the worldwide indie music climate. Back on the Crater Stage, Hollywood Undead proved that their popularity on German soil will never decrease, pulling a full crowd upwards of 30,000 people as they incorporated cuts from new album Five into their live show. It peaked early on hit track Undead, but the American outfit managed to maintain for the majority of the show as they did what they do best. German rapper Casper managed to draw similarly huge crowds to the Volcano Stage as he cemented his status as one of the country’s most integral musical exports. A Perfect Circle‘s new album Eat the Elephant is by no means their best record, but it’s a welcome return to form as Maynard James Keenan once again avoids any and all Tool duties. Perched on a dimly lit platform at the back of the stage – while wearing a long brown wig and sunglasses – Keenan delivered incredibly tight vocals as the band kicked off their set on the bustling Counting Bodies Like Sheep to the Rhythm of War Drums. Eat the Elephant formed out the majority of the set, and it was on So Long And Thanks For All the Fish that the live show well and truly came to life. It took a while for the crowd to truly appreciate A Perfect Circle’s curious brand of alternative hard rock, but once everything clicked it was almost like the band had never left. Headliners Thirty Seconds to Mars are the kind of band whose popularity in Germany knows no bounds, so the decision to book them as a bill topper came as a surprise to absolutely no one. Jared Leto is the ideal showman, although you’ll only truly appreciate this if you get over the fact that Thirty Seconds to Mars have never been more of a Jared Leto project than they are today. He commandeers the stage like he was born on one, with his brother Shannon perched on the drums in front of the band’s sole item of production: a LED screen. Together with balloons, confetti and a barrage of fireworks, this screen served as the only real visual accompaniment to the band’s live show. Then again, who needs production when you have Jared Leto? Set opener Up in the Air set the tone instantly, despite the band taking to the stage twenty minutes late and cutting the set down by two songs. It was on fan favourite The Kill that the show really hit its peak, before an impressive fireworks display following Closer to the Edge sent fans away with an enormous feeling of satisfaction. If Thirty Seconds to Mars didn’t float your boat, then Stone Sour‘s set on the Crater Stage proved to really be the place to be. Just like Leto, Stone Sour’s Corey Taylor is a born and bred frontman who takes no prisoners and lives it out to the fullest from the word go. New album Hydrograd is a career-defining mission statement, and it was that record’s pivotal track – Song #3 – which served as the strongest moment in the set. Fabuless brought the show to an end far earlier than many would have hoped for, which is testament to the incredibly high quality of the band’s production-heavy live show. Stone Sour are the kind of band who you need to see live, although much less of the same can be said for Crater Stage headliner Marilyn Manson. The cult hero has a knack for putting on interesting live shows, although the way in which they’re interesting differs greatly on a nightly basis. His set at Rock am Ring seemed messy and incoherent, much like his vocals. It’s a shame, because a Marilyn Manson show can be seriously fantastic if the conditions are correct. Last night, sadly enough, they weren’t.