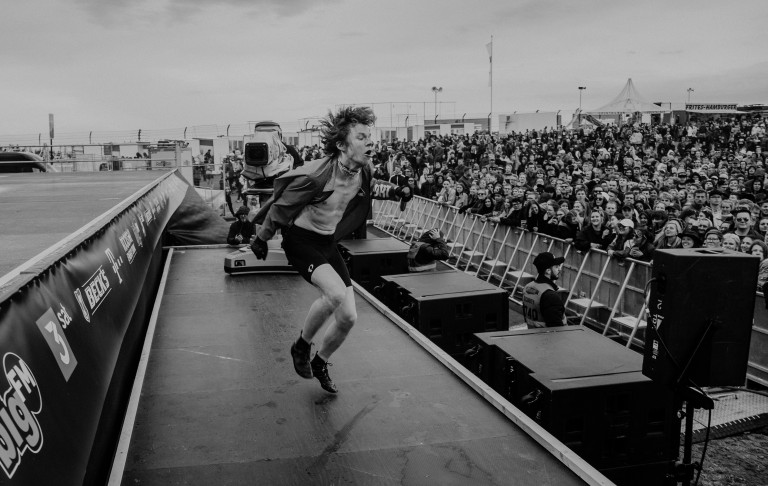 ROCK AM RING 2019: Cage the Elephant Outshine The Rest On Day One

With baited breath, 86,000 German revellers descended upon Rock am Ring with one relatively important question: will everything go to plan? You see, the last few years of Rock am Ring have been marred by a handful of unfortunate circumstances, whether it be torrential thunderstorms, cancellations or false terror threats. These incidents have made the famous German weekender become a doubtful occasion for trusty visitors, most of whom are willing to take the risk and return to the famous race track once more. Yesterday, Rock am Ring 2019’s opening day was marred by crushingly high wind speeds and bouts of rain, resulting in some delays but luckily little else. Although many a festivalgoer made their way offsite before big draws Tool and The 1975 started, there was still plenty for the Nürburgring masses to feast their eyes upon.

The first main attraction of the day came in the form of LA rockers Badflower, an energetic quartet who recently confessed to having grown up watching those famous Rock am Ring live videos. A full circle moment for them, you could say; a moment they cherished and used to their advantage once they kicked off proceedings on the SEAT Volcano Stage. Frontman Josh Katz is an untameable ball of energy, his bright blonde hair flying all over the place much like he did himself. Despite battling supposed jet lag, Badflower made for a strong start to the day during a forty minute set which centred heavily on debut album OK, I’m Sick. Over on the Beck’s Crater Stage, a ravaging Palisades warmed up a small field before the poppier IDKHow turned Rock Am Ring into one big, anthemic sing-a-long. The latter features former Panic! at the Disco member Dallon Weekes, but it’s safe to say that with IDKHow he’s been able to carve out a niche for himself which will serve as a way of avoiding too many “he was in THAT band”-comparisons.

It was at this point in the day that the heavens opened and rain really started pissing down. And let it be everyone’s luck that this happened just before Halestorm – ironically so – took to the stage. The GRAMMY Award winning American rockers are currently on the road in support of fourth album Vicious, although their wind and rain-trodden set on the SEAT Volcano Stage was anything but that. Not that Halestorm are in control of the weather, of course; it’s just a shame when a band can’t put on their best performance due to factors beyond their control. Having said that, though, pop rockers Against the Current took the rain in their stride and battled the hefty currents over on the Beck’s Crater Stage. Frontwoman Chrissy Costanza knows how to command a crowd effortlessly, parading around the soaking stage as photographers followed her every move on the somewhat controversial photo platform in front of the stage. Just ask the crowd, who spent most of the time between songs singing the phrase “Scheiß fotografen!” Lovely. Alice in Chains didn’t have any rain to deal with, instead battling 80km/h wind gusts which delayed the start of the set by some twenty minutes (a delay initially onset by Deadland Ritual earlier in the day).

Enough negativity about the weather for now, though. Cage the Elephant proved their worth on the Beck’s Crater Stage in the early evening, instantly elevating themselves to a level of quality which was not matched by a single other artist appearing at Rock am Ring yesterday. Frontman Matt Shultz entered the stage dressed in what you could honestly mistake for a cycling uniform, were it not for the hyperfuturistic one-band sunglasses and obscure shoes. Walking along the front of the stage almost robotically, Shultz and his older brother Brad (guitar) hyped up the crowd before kicking into new track Broken Boy. Broken Boy is one of the more hyperactive cuts on recent album Social Cues, which the band leant on heavily during the course of their hour onstage. Not that the attention was entirely on the music, though, with the Shultz brothers leaving no stone unturned in their quest to conquer every single facet of the stage. Brad made his way into the crowd numerous times, with Matt engaging in so much contact with everyone and everything around him that you’d be forgiven for thinking he was insane. A one-two of the bouncy Cry Baby and raucous Spiderhead followed, with the rest of the set packed with unforgettable moments. Social Cues may not be Cage the Elephant’s most memorable records, but once Teeth closed the show all people could think was: “what the fuck did I just witness?”. In a good way, of course.

Another band whose most recent album is not as memorable as the rest is While She Sleeps, who seem to have peaked on 2017’s incendiary You Are We. That’s not to say that this year’s SO WHAT? is a bad album, but just that it isn’t as spectacular as You Are We. Then again , that was always going to be a hard record to top. The live show remains powerful as ever though, with Loz Taylor ensuring that the crowd did not stand still for a minute. Crowdsurfers made their way over the barrier faster than your average Brexit deal rejection, with the odd wall of death and circle pit adding that extra bit of intensity to the way-too-small Alternastage. Foals followed back on the Crater Stage, nearly matching the memorability of Cage the Elephant in their own, refined way. Frontman Yannis Philippakis is a seasoned veteran, commandeering the crowd at the click of a finer. New album Everything Not Saved Will Be Lost Pt. 1 served as the focal point of the show, with lead singles Exits and On the Luna both proving to be highlights during the show. They’re a lot slicker than Foals’ earlier output, ditching the raw intensity for a sense of wonderful danceability which earlier cuts nearly lacked. The show’s peak came on older track Providence, which marked Philippakis’ first descent into the crowd. He repeated this during later tracks Inhaler and What Went Down, ending the night nestled in and amongst a happy crowd.

Oh, Tool. Where do we begin? Maynard James Keenan and his men finally look set to release that long-awaited new album this year, and are currently on the road in Europe to preview at least two of the new songs. Those songs, Descending and Invisible, proved to be intriguing additions to the band’s 11-song headline set, one which drew a crowd so unbelievably small that you would be forgiven for expecting another headliner next. But alas, Tool are – deservedly so – the biggest band onstage during Rock am Ring’s first day. They were an otherwise tight live show, one unfortunately marred by a very simple lack of crowd enthusiasm. That enthusiasm seemed to be present elsewhere, in particular for The 1975‘s set on the Crater Stage just before midnight. New album A Brief Inquiry Into Online Relationship is an intense and captivating piece of work, possibly their best. The accompanying live show on this run, for which Rock am Ring was the first European date, allowed Matt Healy and co. to incorporate shitloads of LED screens and two backing vocalists/dancers, all of which added to the millennial charm of The 1975 in 2019. Set opener Give Yourself A Try set the tone without little hesitation, and Healy was most definitely up for it. There aren’t many bands around right now who can pull off what The 1975 are capable of, and you really have to applaud them for that. Live, they’re an unbeatable force of nature, especially when you consider the likes of punchy single TOOTIMETOOTIMETOOTIME, stadium-ready Love It If We Made It and the classic The Sound. An all-round great set from an all-round great band. JP