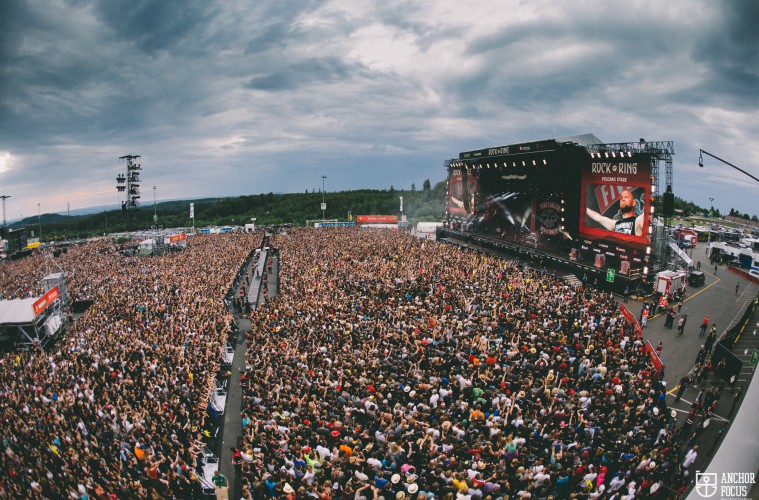 It’s clashfinder time! Today, German festival behemoth Rock am Ring unveiled the entire timetable for its 2018 festival, which takes place in exactly four weeks from now. On the bill this year are a strong set of headliners – Muse, Gorillaz, Foo Fighters and Thirty Seconds to Mars – as well as an undercard which features some of the best new music on offer this year. We’ve scoured the entire festival timetable and picked out the five toughest clashes. These are scheduling conflicts which will make some break out into tears, and make others wince at the tough task of making a decent choice.

This clash will definitely hurt those who identify heavily with mid-2000s alternative rock and who wish to relive those glory days. Both Thirty Seconds to Mars and Stone Sour are bands who have left an impressive imprint on thousands of German music fans, despite having both gone in their own, wildly different directions in the years since. The Jared Leto-fronted Thirty Seconds to Mars seem to do no wrong on German soil, and this has led to them returning to top the bill this year for their first appearance at the Nürburgring since 2013 (a recording of which you can watch below). This shouldn’t be too surprising, though; just picture a crowd of 80,000 fans chanting along to the historic Kings and Queens as Leto stands up on that stage with his arms stretched out like a modern day Jesus. If all the pomp and circumstance of Thirty Seconds to Mars anno 2018 is too much for you, then you’re better off sticking with Corey Taylor’s Stone Sour. The Slipknot frontman’s ‘other’ band released the acclaimed Hydrograd last year, and its no-frills-attached hard rock has definitely gone down well with their German fans. Expect the band to still pull a full field on the Beck’s Crater Stage when they take to the stage, though, because a Stone Sour live experience centres on more than just the music. What that’ll entail this time round remains to be seen, so maybe you should take a peek. Friday, 22:50 through 00:35.

THE NEIGHBOURHOOD vs NOTHING MORE vs STARCRAWLER

Remember those days in 2013 when Tumblr was still in, monochrome colour schemes were hot and The Neighbourhood were riding the waves of success brought upon them by Sweater Weather? Well, it seems like Jesse Rutherford and co. are still at it, having released their new self-titled album earlier this year. As with most of their music, it sounds like an album best listened to at night under a starry sky or in a barely lit room. If it will come across well on Rock am Ring’s main stage just after lunchtime remains to be seen, but if you don’t want to take the risk then it’s only a short walk to the Beck’s Crater Stage, where you’ll find Nothing More doing what they do best: rocking the fuck out, regardless of the time slot. Jonny Hawkins and co. have a knack for leaving a trail of destruction behind at every single tour stop, and with GRAMMY nominated album The Stories We Tell Ourselves under their belts it looks to be no different come 2 June. If this doesn’t whet your appetite, then you should just head to the Alternastage and watch the ever-gripping Starcrawler prove why they are one of the best new bands around today. Saturday, 15:00 through 15:50.

The subjects of this clash might operate within extremely contrasting musical styles, but there’s no denying that both alt-J and Enter Shikari attract similar audiences. This rings particularly true when you take into account that The Spark – Enter Shikari’s new album – sees them ditch the brutality for some slick “woke pop“, which falls way more in line with alt-J’s gripping and ambient modern day indietronica. New album RELAXER is by no means their best, but it’s definitely an album which has demonstrated Joe Newman and co.’s ability to push boundaries and remain relevant. The one factor which might edge in Enter Shikari’s favour with this clash is Rou Reynolds and co.’s onstage charisma, something which has made them a live band worth watching. Whatever you do, your ears will definitely be in good hands. Friday, 18:35 through 20:00.

MUSE vs PARKWAY DRIVE vs ASKING ALEXANDRIA vs TAKING BACK SUNDAY

This just hurts. Physically. On one hand you have live stage maestros Muse, the surprise fourth headliner who nobody really saw coming, despite having just put out pummelling new single Thought Contagion. On the other hand you’ve got the Aussies in Parkway Drive, whose new album Reverence is one hell of a powerful mission statement. Then you have two bands who will perform on the Alternastage in front of the people who are either diehard fans or just couldn’t choose between the aforementioned: revived metalcore quintet Asking Alexandria and the legendary Taking Back Sunday. Both bands are on the road all summer long, and they’ll each find Rock am Ring as the first big port of call they need to stop off at. No pressure, guys. Saturday, 22:20 through 00:50.

KALEO vs BODY COUNT FT. ICE-T vs THE MAINE

This is probably one of the easier clashes on the list, largely due to the varied audiences which each concerned act pulls. On the main stage, you’ll find Icelandic folk rockers Kaleo serenading a front row of teenage girls whilst Body Count and main man Ice-T serenade their boyfriends over on the Beck’s Crater Stage. Stuck in the middle of all this, you’ll find American indie rockers The Maine, an impressive band who are often very much underrated despite their solid live reputation and tight back catalogue. All three bands cater to dissimilar audiences, but that doesn’t make their clashing any less tedious for the select people who like their folk rock as much as they like their anti-corporation heavy metal or soppy indie. Saturday, 18:40 through 20:05.

Rock am Ring takes place from 1-3 June along the German Nürburgring. Find the timetable here, and check out the entire line-up below.