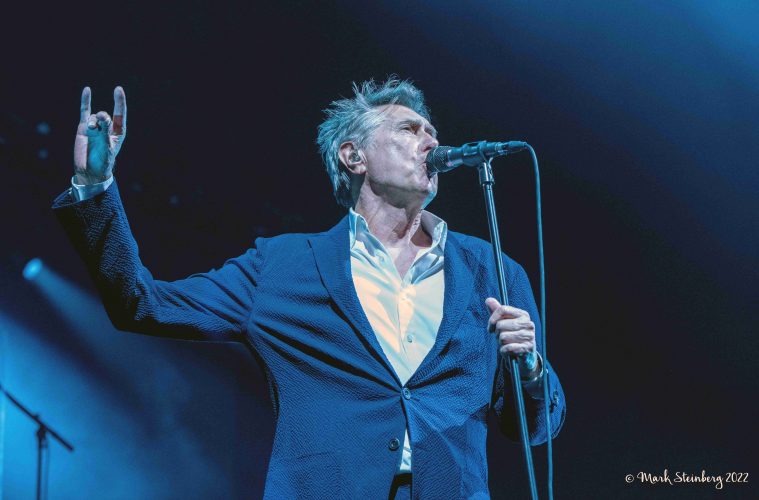 On September 17th 2022, The Roxy Music 50th Anniversary Tour rolled into Boston, for a show at the brand new MGM Music Hall at Fenway. To say the air was thick with anticipation would be a gross understatement.  From the gentleman in the front row decked out in black tie attire, to the throngs of fans wearing vintage Roxy Music t- Shirts, these patrons were in attendance to see, and hear, one thing… Roxy Music!

The band strolled onto the stage to “India”, a prerecorded track from 1982’s “Avalon” LP. After positioning themselves in almost complete darkness, the band launched into “Re-Make, Re-Model”, the first track on the bands 1972 debut LP, Roxy Music.

From the very first song, it was evident that this was going to be a well performed show, with high production values. The sound was fantastic, the lighting tasteful, and the massive video wall augmented the musical performances with creatively designed visual backdrops perfect for Roxy Music’s unique brand of rock and roll.

From the start of the performance it was evident that of the four original band members, Phil Manzanera was the happiest guy on stage.  When he entered, Manzanera greeted the crowd with a hearty wave, had a huge smile on his face, and his playing echoed that same enthusiasm all night long. On “Out of The Blue”, Manzanera’s guitar solo was reminiscent of the work he’d done on the live LP “Viva”, which was recorded way back in 1974. From this writers perspective, the only thing missing with Phil’s performance were the “Fly-Eye” glasses, and his long dark hair.

Bryan Ferry was in fine voice all night, and though his voice has deepened over the years, he didn’t have any signs of the hoarseness which had been reported at earlier shows. Ever the consummate showman, Ferry has always been the king of suave, and his performance in Boston only reinforced that label.

Paul Thompson, The bands original drummer, provided his trademark thunder throughout the night, and though partially hidden from view by the large Plexiglas sound shields, his beat was strong. Thompson had been conspicuous in his absence from some of the post 1979 tours, so it was nice that he’s participating in this reunion tour.

Andy Mackay, the bands Saxophonist and Oboe player, sounded a lot stronger than I had originally anticipated (especially given the presence of the exquisite Jorja Chalmers who basically fills the Mackay role in Ferry’s solo band). Mackay’s solos rang true to the recorded versions throughout the night. Half way through the show, Mazanera and Ferry both exited the stage leaving Mackay as the front man; he excelled in his presentation of the instrumental song “Tara” from the “Avalon” LP.

As a follower of Roxy Music since the 1970’s, I’d break their recorded career into two parts, The first being the first five LP’s from 1972 through 1975, “Roxy Music”, “For Your Pleasure”, “Stranded”, “Country Life”, and “Siren”. The second part being the 1979 through 1982 era which produced the LP’s “Manifesto”, “Flesh and Blood”, and “Avalon”.  As the latter discs were all part of what I’ll call the MTV Era, I think the material on those LP’s reached a far wider audience than the first segment did. As a result it seemed that the songs performed from those records were the more accessible to the crowd. People certainly knew “In Every Dream Home a Heartache, and “Love Is The Drug”, but the reception for songs like “The Main Thing”, ‘Same Old Scene” and “Avalon” was far more responsive than for the older tunes.

The core band was augmented by a six piece backing band, and a trio of background singers. Many of the backing musicians are veterans of Bryan Ferry Solo bands, and the singers included Phebe Edwards (Who brought the house down with her work on the song “Avalon”), Senab Adekunle, and longtime Roxy Music collaborator Fonzi Thorton. Fonzi not only toured with Roxy Music extensively in the early 80’s, but also recorded vocals on the “Avalon” LP.

I was extremely impressed with the bands performance, and the only thing I would point out is that many of the songs seemed quite brief in their delivery. Roxy Music is a band that would sometimes stretch out on material, and at points during the show I felt that some of the songs were way too brief. The MGM Music Hall at Fenway is a gorgeous venue with perfect sightlines and stellar acoustics. It’s housed adjacent to Fenway Park on real estate that used to be a parking lot. Being that it’s right next door to Fenway Park , there’s always the chance not only limited parking in the area, but also a mass exodus from the ballpark while you’re trying to get to the venue. On this night, that’s exactly what happened. It felt like I was headed into Times Square on New Year’s Eve.  If you’re going to a show at the MGM make sure to check to see if there could be a baseball game conflict, and if so plan accordingly. MARK STEINBERG.