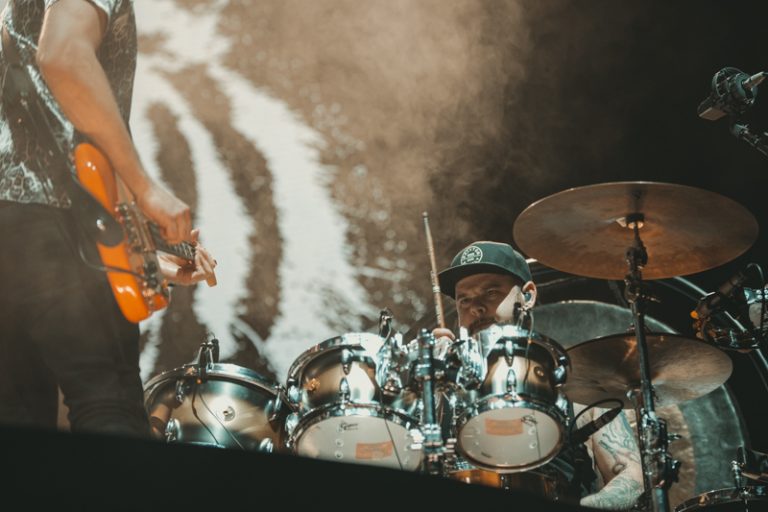 Royal Blood in Amsterdam: No Surprises, Plenty of Anthems

IMAGES Natasja de Vries TEXT Jack Parker
Sometimes all you need for a rock show to succeed is to stick with the basics: solid riffs, powerful rhythms and an impressive stage production. Brighton’s Royal Blood are eight years and three albums deep into their illustrious career, with new album Typhoons seeing the light of day in the midst of you-know-what. Some eleven months after its release, Mike Kerr and Ben Thatcher are finally able to share Typhoons with the world during their most ambitious tour to date. Last night, the duo took their pounding rock anthems to an enthusiastic and sold out AFAS Live in Amsterdam.

Royal Blood have grown a whole lot in the five years since their last headline show in Amsterdam (also at the AFAS Live). This much is evident solely in how intricate and well-woven the newer songs sound when placed alongside the raucous rock anthems from previous albums. Set opener Typhoons’ irresistible grooves resemble Jamiroquai in places, with the swaggering Boilermaker and punchy Trouble’s Coming marking early highlights in the show. Fans have definitely warmed to the new songs, treating them with the same enthusiasm and respect that old hits Little Monster and Come On Over demand early on. Brand new single Honeybrains went down a treat, marking the halfway point in a show which thrilled 5,000 Dutch fans.

It’s important to note that you don’t go to a Royal Blood show to be surprised, or to hear something you’ve never heard before. Despite the sonic growth on Typhoons, a Royal Blood song will always be a Royal Blood song and you can generally hear it from a mile off. There are no surprises during the show – even the rock music clichés are perfectly phoned in. Kerr’s crowd interaction, Thatcher’s drum solo during Little Monster, even the encore-opening piano ballad All We Have Is Now – none of it is a surprise. But then again, you don’t go to a Royal Blood show to be surprised. You go to hear ninety minutes of slick and powerful alternative rock. You go to hear Figure It Out, Out Of the Black and Ten Tonne Skeleton. The music does the talking (with a bit of help from a large video screen and massive light rig), and it works.