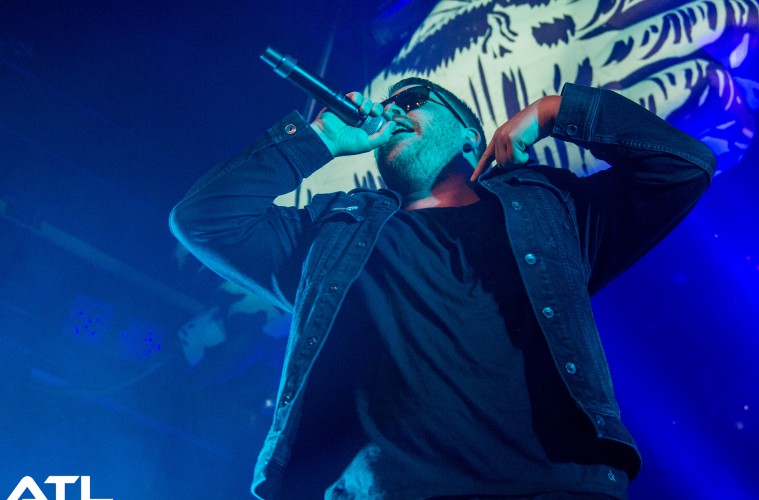 In a world where socially conscious music continues to make more and more of an impact, it’s important to keep an eye out on the acts who really put in that extra effort to ensure that we, as a society, function and co-operate better. US rap duo Run the Jewels are the perfect example of a group whose social activism and commentary blends seamlessly with their infectious rhymes and beats. Last night, Killer Mike and El-P took to an absolutely packed Melkweg in Amsterdam to prove themselves as worthy festival headliners. Taking to the stage some 45 minutes later than billed (with no support act to tie the crowd down), it was up to the duo’s DJ to warm the 1,500-strong crowd up with a lung-busting rendition of Queen’s We Are the Champions, during which Run the Jewels emerged like returning heroes to the stage. Opening their set on new track Talk To Me, it was instantly clear that the show would lean heavily towards new studio album Run the Jewels 3, which the duo put out for free on Christmas Eve. In the space of just over an hour, the pair managed to pull some eighteen tracks out of the bag at a rapid pace which seemed almost forced thanks to their delayed start. The group’s tracks lend themselves to chaos and disorder, though, so maybe this feeling of forcedness actually ended up in their favour. Early highlight Legend Has It segued perfectly into the manic Call Ticketron, both of which fused and made for the night’s first big pit. Early on in the set, Killer Mike took it upon himself to make a statement about crowd behaviour: “Amsterdam! If she ain’t yo’ wife or girl, then don’t get yo’ dick out and leave her alone” declared the Atlanta rapper at the top of his lungs, receiving an abundance of cheers in return. And quite rightly so, because this is the great thing about Run the Jewels: their ability to blend social commentary and wise advice (not that this was advice per se, more just common sense) into a set which seemed unlikely to stop for just one moment. El-P remained quieter throughout, only interjecting some banter into the set during short breaks between tracks. When the band returned for a brief encore, it was the destructive Close Your Eyes (And Count to Fuck) which truly cemented RTJs status as born and bred festival headliners. This June, the pair will top the bill on the first day of Best Kept Secret, marking the weekender’s first ever rap headliners. Questions were asked by many back when it was announced as to whether or not the duo had a strong enough back catalogue to sit atop the poster alongside Arcade Fire and Radiohead, but if last night’s show was anything to go by then Hilvarenbeek can expect an absolutely destructive night on Friday, 16 June. If this outfit haven’t been elevated to the upper echelons of rap and hip hop by this time next year, then something must be wrong. RTJ 3 is out now. Catch Killer Mike and El-P at Best Kept Secret Festival on 16 June. Get your tickets here.