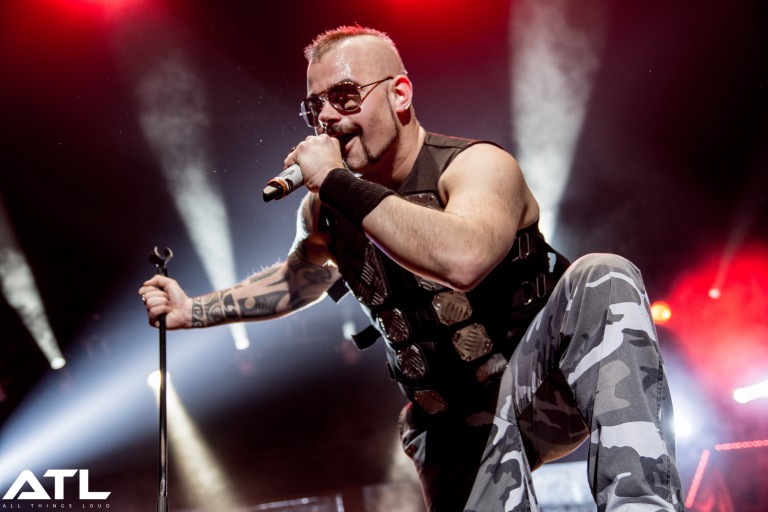 Sabaton Bring the War to Amsterdam

Power metal is a funny thing, isn’t it? The genre, which stems from classic 80’s metal, seems to have built a strong reputation of its own on the back of the success which the classic Big 4 (Metallica, Megadeth, Anthrax and, of course, Slayer) made some twenty to thirty years ago. With a big chunk of the genre’s success having transported its success across to Europe, it comes as no surprise that some of the continent’s finest metal bands operate within the genre boundaries that power metal permits. Swedish outfit Sabaton is one of them, and the band are currently undergoing their final tour before a much needed live sabbatical. Last night, the group took to a packed AFAS Live in Amsterdam together with special guests Accept and fantastical support act Twilight Force. Special guests Twilight Force may not have had the production budget that the cannon-wielding Sabaton did, but it didn’t stop them from pulling everything they had out of their magical Swedish hat. Chrileon and his compatriots entered the stage in such a fashion that the average listener may have felt as though they’d been transported to a real life re-enactment of World of Warcraft, and you’d definitely forgive anyone for the confusion. Draped in cloaks and armed with daggering guitars, Twilight Force hit the newly rebranded AFAS Live with a brand of anthemic and pummelling symphonic power metal which was straight out of Warhammer. It was so powerful that even Donald Trump’s best efforts at building a wall around it would seem like a slight whimper. Do they take themselves seriously? Who knows? Was it fun? If fairytales and symphonic metal are your thing, then yes. German metallers Accept also took to the AFAS Live stage, having put out their fourteenth studio album Blind Rage out three years ago. In the three years since, Mark Tomillo and co. have silently ridden the waves of glory which were bestowed upon them during the 1980s, performing their blend of classic rock and thrash metal in front of a near-full room. Opening on the pummelling Stalingrad, Tomillo and guitarist Wolf Hoffmann stole the show as they bounded around the stage in a fashion which was most energetic. Set closer Balls to the Wall ensured that Amsterdam fully understood what Accept was all about: no bullshit, just riffs and anthems. Having been around since 1976, it’s no surprise that Accept have picked up quite some following within the ethers of Western Europe; so much so, in fact, that a large chunk of the room seemed to engage extremely well with Tomillo and his men. As special guests go, Accept definitely did the trick in warming Amsterdam up for the Sabaton onslaught they were about to be on the receiving end of. And what an onslaught it was. From the word go, Joakim Brodén and co. took on Amsterdam in a similar fashion to the German invasion of Poland which sparked the Second World War. Despite their flamboyant production visibly lacking the famous Sabatank (get it?), the Swedish outfit knew exactly how to push the crowd’s buttons. With pyro in abundance, the rockers opened their set with a pummelling rendition of the hard-hitting Ghost Division. Mixing godlike organs and ferocious percussion, you couldn’t really wish for a better opener. “The invasion has begun” declared Brodén, setting the scene for the following 100 minutes. Sabaton have definitely upped their game from a performance aspect, playing much tighter and well-rehearsed than they did a few years back. The menacing Carolus Rex and anthemic The Last Stand appeared back-to-back later on, with the band’s loyal followers hanging onto every war-infused word. Are Sabaton worth taking seriously, though? It’s easy to overlook their tight riffs and slick rhythms when the emphasis is mainly placed on telling old tales of war and bravery. At one point in the show, these tales were even accompanied by men dressed up as Roman soldiers. Not that this is a bad thing; in fact, it’s Sabaton’s unique selling point and certainly something which has helped them stand out in and amongst a metal landscape which seems forever bugged by the case of “same old, same old”. An acoustic rendition of The Final Solution materialized towards the end of the main set, stripping away all of the band’s flamboyance and brash musicality. It left the 4,000-strong crowd with a brief moment of rest, before the likes of main set closer Winged Hussars and the destructive To Hell and Back brought the show to a majestic end. With this tour billed as their last in a while (by means of a terrible pun: Sabatonnical), it seemed as though Sabaton put their all into bringing a production with them which enabled the whole crowd to enjoy them one last time. Sabaton brought the war to Amsterdam, and they certainly did it right.

Sabaton’s new record, The Last Stand, is out now. Find a full collection of shots from last night’s show below.