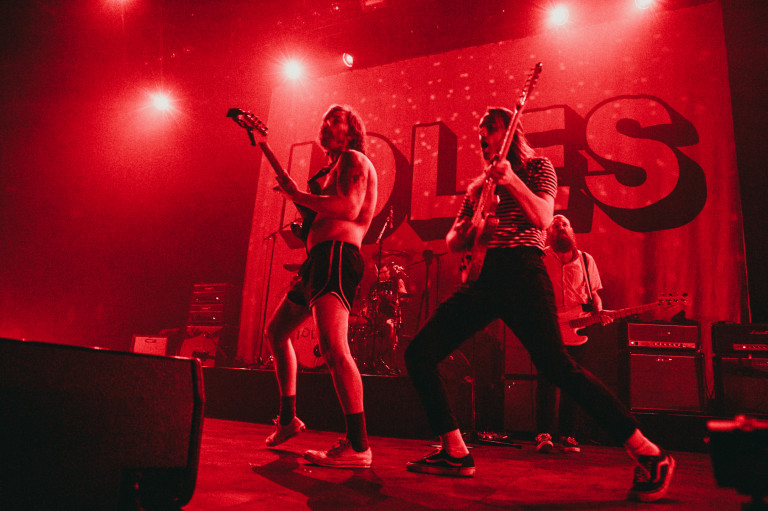 Although we haven’t exactly been starved for music in 2020 (despite obvious circumstances), it’s safe to say that 25 September is the most mouthwatering release day we’ve experienced in quite a while. Not only have heavyweights Deftones finally returned with their best album in years, but raucous punks IDLES have also struck gold on third album Ultra Mono. As if that wasn’t enough, there’s also a hotly anticipated new Sufjan Stevens record to get excited about, as well as Will Butler’s (Arcade Fire) second solo offering and a surprise release from Fleet Foxes. Jack Parker runs you through all five albums in a one-off bumper review.

On IDLES’ third album, Ultra Mono, frontman Joe Talbot has never been more ready to fight. The follow-up to the highly successful Joy As An Act of Resistance is a 12-track collection of in-your-face punk which broadens its horizons more than the band have ever done before. Opener War sounds like several different worlds colliding and exploding at once, Talbot’s rallying cry of “this means war” echoing through the room alongside a mix of machine gun-like drums and screeching guitars. War is a dark, visceral start to an album which sounds everything and nothing like the band have ever attempted. Singles Grounds and Mr Motivator serve as two familiar faces early on, providing a contrast of sparse beats on the former and visual storytelling on the latter. Both songs are highlights on the record, one which has plenty of highs and hardly any lows.

Anxiety is the closest Ultra Mono comes to by-numbers IDLES, which is essentially a mix of clattering rhythms and Talbot’s witty lyricism (“my girlfriend just dumped me for Friday night TV”). Kill Them With Kindness tricks you into thinking IDLES have gone jazz thanks to Jamie Cullum’s lounge-y piano work, but it doesn’t take long before the song turns into a glam rock stomper complete with larger than life chorus and stabbing, fuzz-infused solo. Cullum is one of five guest stars on the record (not including Kenny Beats’ production assistance); The Jesus Lizard’s David Yow lends his voice to four songs, with Savages’ Jehnny Beth, The Bad Seeds’ Waren Ellis and Saxophonist Colin Webster also making appearances. Beth shines on Ne Touché Pas Moi, a fast-paced monster of an anthem which tackles cat callers and consent. Talbot introduces it as a “song for the cat callers” and a “pistol for the wolf whistlers”, and although its message is and remains as important as ever, it’s a shame that – in 2020 – we still have to remind others to keep their hands to themselves.

Talbot’s social commentary goes farther and wider on Ultra Mono. Modern Village serves as a glimpse into small town Britain and its prejudiced, backward ideologies (“homophobes by the tonne in the village“), while Carcinogenic sets its sights on capitalism, the exhausting 9-5 mentality and political hypocrisy. “You only die once, you’ll never come back, you’re gone when you’re gone so love what you can” preaches Talbot during the chorus, with references to austerity, high rise flats and food banks littered throughout. Reigns is a bass-heavy stomper complete with stadium-worthy chorus, whilst The Lover heads down a more elaborate path flanked by gritty guitar lines and more classic Talbot wit (“look Ma, I’m a soul singer, singing in the faces of the middle finger”). Penultimate track A Hymn is the first and only opportunity on Ultra Mono to take a breather, circling on more emotional undertones as it gears you up for catastrophic album finale Danke. First performed live late last year, it closes out the album much like War started it: chaotic, frenzied and hyperactive. The only lyrics on Danke are lifted from Daniel Johnston’s True Love Will Find You in the End. It’s a fitting homage to the late cultural icon, who passed away in 2019. Ultra Mono is IDLES’ defining statement, an album which never holds back. It’s a punch in the face of anyone who tries to stand in your way, and it’s a rallying cry for a generation who need to hear it more than ever.

Back in 2016, Deftones blew hot and cold on the slow burning and pastel-themed Gore. Although it wasn’t necessarily a bad album, it didn’t match the high standard which Chino Moreno and co. set on previous releases. Four years down the line, and they’re back with the menacing Ohms. Spanning ten tracks, Ohms is a Deftones at their darkest. Menacing opener Genesis is a brutal slap in the face complete with Moreno’s blood curdling howls and yelps, underpinned by a riff so ferocious your neck may break. Elsewhere, the brooding Pompeji and haunting The Spell of Mathematics serve as clear-cut highlights, showcasing the best of Deftones heavy side among a mix of ethereal soundscapes. The one-two of the bustling Radiant City and brooding Headless will undoubtedly become fan-favourites once live music returns. Closing track Ohms is a beautiful mix of euphoria and angst, blended stunningly by a pounding guitar line and Moreno’s echoed vocals. Deftones aren’t the kind of band who pull a brand new direction out of the pocket, but that doesn’t mean they’re incapable of surprising you. If anything, Ohms should surprise, excite, enthrall and please you like no other Deftones record since White Pony has. Of course, it’s no White Pony, but then again Deftones aren’t the kind of band to look back and re-hash old ideas. Ohms is a forward thinking and powerful album which should satisfy fans aplenty.

Sufjan Stevens albums are like elections. They only come once every few years, and when they arrive – after plenty of hype and speculation – there’s no telling which way it’s gonna go. After the immense success of 2015’s Carrie & Lowell, Stevens found himself in the absolute pinnacle of a two-decade lasting career, one in which he intentionally faded into the background as he avoided live shows and simply let the music do the talking. Carrie & Lowell inspired a whole new generation of musicians to pick up their instruments and get emotional. Does its long-awaited follow-up The Ascension inspire a similar wave, though? And does it match the incredible quality of what many described as Stevens’ best album? Yes and no, to both questions. While The Ascension is a return to Sufjan’s ambient electronic side, it still possesses glimpses of the emotionality which made Carrie & Lowell so potent. Run Away With Me is a sonic dreamscape lead by almost hushed vocals, whilst Video Game and Tell Me You Love Me take their cues from RnB and dream pop. There’s a lot to unpack on The Ascension (for example on the sprawling America, harmonic Sugar or the dense Ativan and glitchy Gilgamesh), but if you pull apart the layers you’ll find Stevens at his best. It might take a while for this album to become a favourite among fans and critics, but only time will tell how well this record sits amongst Steven’s large back catalogue.

Times Square and a crowded room: just two of the places Arcade Fire’s Will Butler insists he won’t be dying in on Not Gonna Die, the standout track on new solo album Generations. The follow-up to 2016’s Policy sees Butler kick things up a few notches over the course of ten tracks, delving deeper into his rich family history during the writing process. The hard work Butler put into researching his legacy pays off on Generations, an album which hones in on his witty songwriting by means of powerful, synth-infused indie pop. Opener Outta Here quite literally bubbles up from under thanks to a pulsating synth which nearly sets the phasers to ‘indie disco’. It’s a strong start to an equally strong record, peaking on the frantic Bethlehem and disco-centric Hard Times. Singles Suddenly and Close My Eyes slot in nicely alongside the rest of the record; the former is a classic Butler cut complete with call and response vocals, whilst the latter is simply made for singing along to in a sweaty club with your mates. Not that any of that will be happening any time soon, of course. Generations comes to a glittering close on Fine, a seven-minute long jazz ballad in which Butler lays all of his family history out on the table. “I was born rich, three quarters protestant / Connections at Harvard and a wonderful work ethic,” he muses over a lilting piano and flute combo, interspersing his story with tales of George Washington and his slaves and faux-deep musings (“What if God was a douchebag on the 33rd floor?”). Fine is one of the best pieces of music Will Butler has to his name, and its placement on the album suggests that everything has been building up this moment. Generations is more than just Will Butler’s second album; rather, it’s a solid sonic progression and exciting glimpse into his life, his legacy and his mind. Read our interview with Will Butler here.

Not many bands are as synonymous with autumn than Fleet Foxes are. Yesterday, Robin Pecknold and co. released surprise album Shore to mark the start of the season, unleashing fifteen glittering songs onto the world without so much as a word of warning. Not that one was necessary, of course; when you’re a band of Fleet Foxes’ stature, you can pretty much get away with dropping a record out of the blue. Shore isn’t a life-changing offering from the indie folk legends, but there’s no doubt that this is a solid album. From early highlights Sunblind and Can I Believe You to the upbeat Maestranza and densely layered closer Shore, it’s an album which the Fleet Foxes faithful will lap up, and which non-fans will surely appreciate. Shore is a little on the long side (clocking in at just under an hour), but then so is autumn. No one’s counting, right?