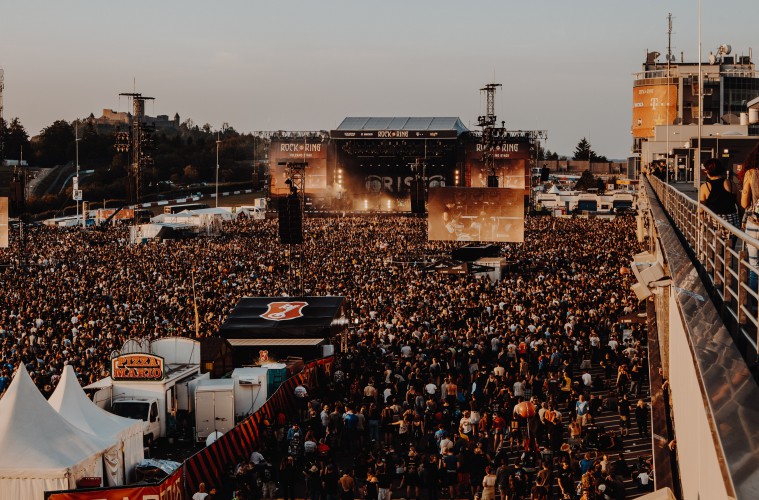 In little more than a month, Germany’s famous Nürburgring will once again open its door to upwards of 80,000 festivalgoers for what is undoubtedly one of the year’s biggest music festivals: Rock Am Ring. The huge event – which is accompanied by Bavarian brother Rock im Park – has seen a fair few ups and downs over the course of the last three years, but it looks to be the case that 2018 will serve as its rightful resurrection year. Rock am Ring has been at the forefront of rock music history for decades, and this is certainly reflected in the massive line-up which they’ll be putting on this year. Spearheading the billing in June are Slayer, Slipknot, Tool and Die Ärzte, four acts who don’t exactly need much of an introduction and who are deeply cemented in Rock am Ring’s history books. Despite making way for a light shift towards electronic music and hip hop in recent years, it looks like guitars are well and truly at the core this year, with some of today’s hottest bands making their way to the famous race track in five weeks. We’ve scoured the line-up to select seven songs which will be unavoidable along the Ring this year.

Slayer are finally calling it a day, so what better way to kick off this list with one of the most iconic thrash metal songs of all time?

The 1975 are an absolutely unavoidable band. A force to be reckoned with, you could say. Love It If We Made It is their defining piece, a mission statement for a broken, digital generation.

As Jack Black himself once said: “This isn’t the greatest song in the world, this is just a tribute”. Based on this quote we’re assuming Tenacious D are paying tribute to Toto’s Africa, but that’s a discussion for another day. Also Dave Grohl’s Satan.

BRING ME THE HORIZON – WONDERFUL LIFE

If Carlsberg made musical sledgehammers, they’d sound a bit like this.

Foals‘ last scheduled show at Rock am Ring was cruelly culled in 2016 following critical weather conditions, which makes their return this summer all the more worthwhile. Especially with new album Everything Not Saved Will Be Lost Pt. 1 to boot, featuring splendid lead single Exits.

UNDEROATH – A BOY BRUSHED RED LIVING IN BLACK AND WHITE

Underøath are one of those bands who you have to see at least once in your life. Not sure why? Then see for yourself…

There’s no guaranteeing that American alt rockers Cage the Elephant will continue to pull deep cut Teeth out of the bag now that new album Social Cues is here, but one can only hope that all five of its chaotic minutes will ring through the PA come June.