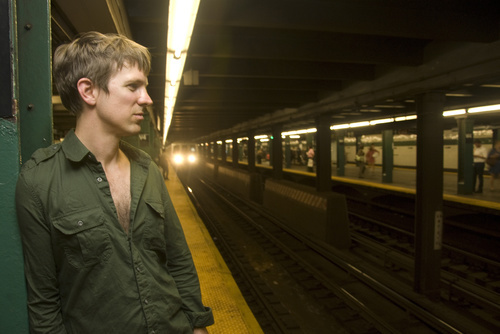 Jonathan Meiburg is an intelligent man. Sitting in Café de Pont, just north of Amsterdam Central Station, the Shearwater frontman is busy discussing his band’s latest album Jet Plane and Oxbow, due January 22. All Things Loud called him up to talk about new music, his travels and a nature book he’s set to release in the near future.

Jet Plane and Oxbox, set for release through Sub Pop, has been labelled as Shearwater’s ‘career-defining album’. Meiburg worked with Brian Reitzell throughout the duration of its recording, taking the album to him when the process was nearly done. In Shearwater, Meiburg is joined by Danny Reisch, Lucas Oswald, Abram Shook and Jesca Hoop. Together, they aimed to give Jet Plane and Oxbow “a greater textural depth”. According to Meiburg, Reitzell’s work perfectly suited Shearwater due to its cinematic scope. “It was interesting for him to make music with no picture” explained Meiburg, adding that he tends to compose music for TV whilst also doubling up as an excellent percussionist. Once the record’s songs received the Reitzell treatment, Meiburg felt that the album sounded “much bigger” and different to how it would sound without Reitzell’s involvement. Band member Danny Reisch played a great part in producing the album, with Meiburg glad that he could enable Reisch and Meiburg to work together. “They were a fantastic team”, claimed the frontman.

In a press release interview which accompanied Jet Plane and Oxbow’s announcement, Meiburg spoke of David Bowie and Peter Gabriel’s influence. Apparently, both musicians had a big effect on the record in the way that it was recorded. “We tried to make the record sound as if it was recorded today, whilst incorporating sounds from the time of David Bowie’s Scary Monsters era” explains Meiburg, adding that he wanted to achieve a “dark kind of sound combined with new technology”. The darker sounds present on the record lie in tow with its ‘protest’ album undertones. However, Meiburg did his best to avoid making it sound like a ‘dumb’ or ‘preachy’ one. The reason for this is thanks to David Bowie once again, with Meiburg reading an interview with the Thin White Duke from 1980 in which he talks about the idea of a social protest record. “I started thinking about what it meant to be part of the USA and growing up in America” explains Meiburg, adding that most of his work and performing life took place outside the USA. “I didn’t want to make a preachy, slogan-infused record; rather, I wanted to make an emotional one”. Is the record a patriotic one, then? Apparently, this is something you have to be careful with. “I think there are some pathogenically strange American cultures which will always be with us, and that can be frightening” he explains, claiming that America is a merciless country driven by individualism. “It really does have a dark side” he concludes, really forcing his harsh words home.

During a discussion with Michael Azerrad about the album, Azerrad says that Jet Plane and Oxbow “looks back, but it also looks forward”. Meiburg states that this was the intention, especially as he wanted to use sounds from an era he experienced as a young child. “I didn’t want to make it an exercise in nostalgia, but I did want to make something that reflected the way I feel today using textures and sounds from the past”. The resulting album is a beautiful combination full of swirling melodies and clever lyrics straight from Meiburg’s own thought process. He has a lot to say about the state of the world today, a sentiment echoed in his claim that “we live disconnected from the natural world more and more”. Elaborating on this, he believes that we live in a time which is analogous at the moment. “Our psychological world is changing, and it will change our lives in different ways”. Change is important for Meiburg, and the differences between Jet Plane and Oxbow and Shearwater’s previous releases are stark. Among the long list of previous releases are Fellow Travellers and Animal Joy, both released through Sub Pop. Meiburg believes that the way you evolve musically “is for you to become a different person and grow in a certain way”. Much like how our psychological world changes us, the musician claims that music does the same to our psyche. “If you want your music to be different, you have to be different as a person!” he enthusiastically states.

On the topic of what influenced Jet Plane and Oxbow both musically and lyrically, Meiburg explains that each song is based around one or more particular phrases. He believes that it’s important that the lyrics and sounds integrate with one another, so that the music isn’t just “in the background”. As he explains, “the textual parts of the music are more noticeable. The more textual a song became, the more ambivalent the lyrics became”. This interweaving of voice and sound proves important for Meiburg and his band, with the frontman comparing this to the way in which life is paradoxical. “Most of our experiences of life are of things which are opposed to one another” he states. When Meiburg was younger, he experiences a lot of older gear and instruments which have now gone on to influence the creation of Jet Plane and Oxbow. His reason for going with older equipment stemmed from the fact that it had a “warp or bigness” to the way an actual big drum sounded in real, to name but one example. Meiburg found pleasure in reverb and the sounded produced, explaining how the whole album was recorded with the aid of an old computer. “It was so old that when we shut it down it showed a message saying ‘Thank you for working with me’”, he laughs.

Away from the music, Meiburg also works in science and research. He believes that there is a fine line between his scientific research and his music. “When I did research for the book in Southern Guyana and Brazil, I felt like a receiver taking it all in” he explained, adding that “with music I feel like a transmitter”. The book Meiburg is writing will come out at some point in 2018, and he labels it as a big project about “everything”. “The book begins in a small falconry park in Southern England. A man there keeps a different number of birds of prey, and trains them to do all these bizarre things such as retrieve objects based on colour and shape”. The questions which Meiburg asks himself are, “why would a bird do this?” and “why would this man and this animal have such a deep connection?” The bird is set to be an examination of how the man and the bird became friends. To answer his aforementioned questions, you have to go to an older time. “You have to tell the story of South America as a continent, such as its geology, biology, history and literature” concludes Meiburg, doing his best to reveal as little as possible about his book.

Jonathan Meiburg is an intelligent man, with his musings on new album Jet Plane and Oxbow detailing the many ways in which he uses both his musical ability and scientific research to create output so intricate and well thought-out that you’d be hard pushed to find someone quite like him in today’s world.

Jet Plane and Oxbow comes out on 22 January via Sub Pop.