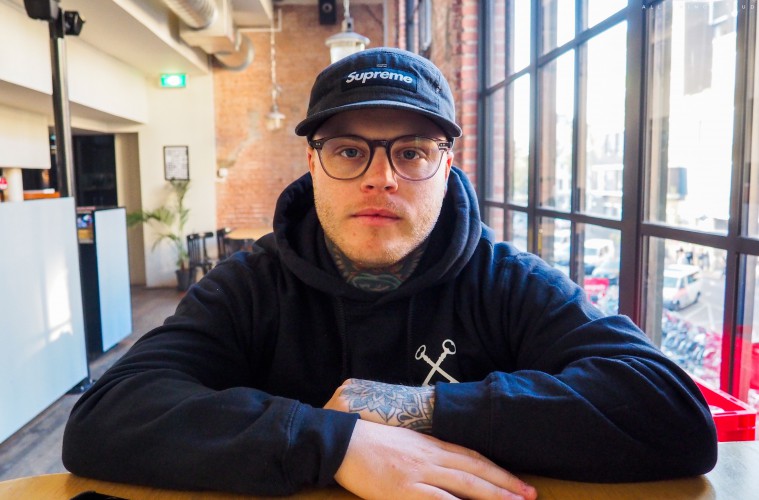 Hard graft, dedication and a strong work ethic are three areas which can sometimes be hard to come by in today’s “it’ll do”-scene. Luckily, though, there are still various bands out there who employ these things vehemently, with Myrtle Beach outfit Hundredth a prime example. Last week, we sat down with frontman Chadwick Johnson to discuss his band’s past, present and future. You recently shared some footage from inside the studio. Are you working on a new record?
We’re working on a couple of songs. We’re kinda taking it slow, and we’ve just recorded two songs which we’ll release later in the fall. The plan is to release them, so we’ll see what happens with that. There’s no set release date or anything, but we’ve just gone ahead and slowly started working on the next record. It’s a couple of songs at a time.

Is it in a similar vein to (2015 studio album) Free?
It’s where I think we should go next. So it’s not the same thing as Free, because we don’t ever want to write the same record twice. It feels like it’s along the evolution of what we want to do.

So what kind of topics are you drawing from for inspiration?
The songs haven’t got lyrics yet, to be completely honest.

And musically?
It’s weird, honestly. I don’t know what it reminds us of. It’s slightly more alternative, I guess.

Of course you’ve also got the whole ‘lock & key’ imagery going on. Where did that originally come from, and what does it really symbolize?
I’ve done a bunch of interviews about this before, but it kinda just came out of some merch designs which I made for the band one day. We were like, “yeah, that’s cool” and then we started putting it on shirts and stuff. It then just became our logo, yeah. It’s kinda evolved towards what it means now, which is basically the unlocking of anything that holds you from being who you want to be or who you should be. You’re currently touring Europe as part of the Impericon/Never Say Die Tour. How’s it been so far?
It’s been awesome so far! We’re playing with a lot of metal bands, though. I’d say that the other bands are a lot more metal compared to us, but it’s all cool.

This year boasts a lot of bigger scene names, compared to previous line-ups. What do you think these kind of big package tours mean in terms of keeping the scene alive?
It definitely gives the fan a chance to see a bunch of bands for the price of one ticket, which is cool. I think a lot of the people on this tour haven’t really seen us before, so it’s cool that they get to check us out earlier, even if they’re coming out to see something else. It’s awesome, because you know that the show is gonna be good every night as there’s so many bands playing.

Are there any news bands, not necessarily on this tour, who are catching your attention?
I’ve been listening to this band called The Funeral Advantage, but it’s not really in this world at all. It’s a shoegaze-y band. I’ve also been enjoying the new Drake record (VIEWS), and that’s all I’ve really been listening to.

So what’s the scene like back at home? Is it still going strong?
It’s not really that strong. We live in a weird beach town that’s seasonal, which means that there’s a bunch of people there in the summer. No one comes there for music or anything, though. They just go there to get fucked up, because it’s a party town. There’s not a lot of bands from where we’re from, and we haven’t played a show there in years. There’s not really a market for us there. Do you think that made it much harder for you to break through in the first place?
No, because we pretty much started touring immediately. The minute we recorded some songs we went on tour. We started meeting people who wanted to take us on tours, and that kinda helped us out. We didn’t try to expand from the local scene because we knew that it was already so limited. If we wanted to do something, then we had to go out to the bigger cities.

So it just went on from there exponentially?
I wouldn’t say that the band has grown fast; rather, it’s been a gradual growth. There’s never been a minute where we really skyrocketed, and it still isn’t like that. It’s just a steady climb, which is cool. I prefer it like this as opposed to it being hot and cold.

Aside from the two songs that you’re working on right now, is there anything else in the pipeline for 2016?
Yeah, we have some tours planned. Likely one over here too which we’re trying to work out right now.

Headline tour?
Yeah, for sure. Unless something crazy happens, but that’s the plan. We’re also doing a tour of the States which hasn’t been announced yet, and we’re just gonna keep writing and recording songs. It’s good to keep busy when you’ve got a chunk of time off. We’ve toured super hard throughout the last few years.

So now it’s time to wind down? Not necessarily a break, of course.
Yeah, just to work on a record. We did Warped Tour last year, and that takes a lot out of you. After this tour we’re gonna lay low, work on some new songs and then do the fall tour. Just reboot and refresh, which is cool.