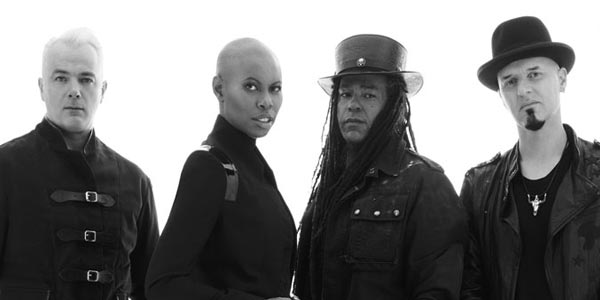 Skunk Anansie: “I feel sorry for every other band member out there”

When Skunk Anansie released their third post-reunion album, Anarchytecture, earlier this year, not many people knew exactly in which direction the record would take them. Was it going to be a world-beating LP set to skyrocket the band back into public consciousness, or would it turn out to be another attempt at extending Skunk Anansie’s already prolonged life expectancy? It turned out to be the former, with its success taking the band to the top of Pinkpop’s 3fm Stage a few weeks back. We sat down with guitarist Cass and drummer Mark ahead of the show to talk the new record, the difference between pre- and post-disbandment Skunk Anansie and what the future beholds for the quartet.

Your latest record Anarchytecture came out in January, which is already six months ago. Can you tell us a little bit about how the record came to be what it is?
Mark: Yeah, um.

Mark: We started writing at the beginning of last year, and did a lot of one/two week writing sessions. We ended up with, as we always do, a gazillion ideas which we honed down to about 23 songs, eleven of which we recorded for the album. We were thinking about who to get to produce it, and when the Royal Blood record came out we all fucking loved it and got in touch with Tom (Dalgety, producer). We then did a bit of pre-production and eventually made the record with him at RAK Studios in St John’s Wood.

What did Tom bring to the table?
Mark: He had a brilliant knack of, um…

Cass: He’s very good at working with bands! He’s good at getting all of the elements working and making sure that whole band works together, and he’s got his own personal vision. To be honest, we tend to produce everything ourselves and do too much work. On this album, we managed to leave a little bit of space for Tom to do his work.

So was this the first time you worked with an external producer?
Cass: No, no. We worked with Andy Wallace (Nirvana, Rage Against the Machine), Silvia Massy, Garth Richardson. They’re all great producers, but we always seem to be co-producing or producing ourselves. This was the first time we had a more hands-off approach and let the man do his work. Tom was like a fifth member of the band, he worked well with us, y’know?

Cass: Yeah why don’t you try and spill it on the camera, hahaha!

Mark: I’m not trying to spill it!

This was your first album in four years, and your third since reuniting in 2009. Are you finally back in the swing of things?
Cass: Absolutely. Back in the swing and loving it!

Mark: We’ve been going nearly as long as we were the first time now.

So how does Anarchytecture stand out compared to your previous records?
Cass: Personally it’s my favourite one since Post-Orgasmic Chill.

Cass: It now seems like we’re going upwards. To me anyway, in my brain. Who’s to say that has any relevance in the real world?

Mark: When you think about it, Wonderlustre was sort of poppier, whereas Black Traffic was much heavier. This one is more a space in the middle.

Cass: Once you stop for a long time you’ve got to find your feet again. It’s not that we can’t write songs; we always write songs, but it’s a matter of finding your voice.

Where do you ideally see your sound progressing in the next few years? Or do you just let it go?
Cass: No idea man, you know as much as me! When we start writing it’s just all up in the air.

Mark: It’s chaos. Anything goes. Seriously, you can have any idea and, if we all like it, we’ll go down that road.

Cass: We don’t have a system that we work to either. Everything is always open architecture, which means that it can start from anything.

So where did the name Anarchytecture actually come from?
Mark: We were in a hotel in Milan and our manager was like, “we need a fucking title for this record!” Ace was sat down in the lobby in his little library reading books, Skin was in her room. One of them liked the word anarchy and wanted to incorporate that into the title, and the other wanted to do the same with architecture. It came from basically smashing those two words together.

You’ve now let the record sink in a little bit with your fans. How’s the reaction been from them?
Mark: It’s fantastic! We did a couple of headline shows on our way here and it’s just been really great. The festival crowds are always a challenge because everyone’s here to see everyone.

Cass: You know what? I think that if the songs are good, the songs are good. If someone hears a song for the first time, and if it’s a good song, then they’ll get it. The older material is more familiar, but it all seems to be going nicely.

You’ve been around since the mid-90’s now, but do you think that the inter-band dynamic has changed a lot since you started out?
Cass: That’s 22 years now!

Older than us!
Cass: You’re younger than 22?

I’m 19 and she’s 18!
Cass: Get out!
Mark: He was 12 when we got back together!
Cass: You’ve got no business to talk about music with us, haha. Can you even speak properly? But no, the vibe in our band is beautiful. I would be hard pressed to find another band that’s got the same kind of vibe. Everyone talks about how they’re family, but our band is really for real. It’s not a joke. All we do is laugh when we’re on the road, and after 22 years of being in a band with the same members it’s just joyous. I just feel sorry for every other band member, because they’re not in Skunk Anansie.

Mark: Whenever we go out on tour we always say that we’ll take it easy, that we won’t run around that much or jump into the crowd. However, we come out of it as soon as we get up onstage.

Cass: All them young bands your age are too scared to play with us! We’re seasoned campaigners with all the experience. We play properly, and we’re mad as fuck.

Have there been any “mad as fuck” stories from the road lately?
Cass: There are loads, but you’re not old enough to hear them! You already blew yourself out of the water when you said you were 19!

The industry has of course changed a lot since you first emerged. How much has it changed in your personal opinion?
Cass: The major change is the advent of the internet, isn’t it? Music is free now, so it’s sucked all the money out of record sales. At one time, there was a lot of money in the music industry. Now, if you want to earn money playing music, you need to be able to play live.

Mark: Even that’s getting squeezed and squeezed.

Cass: Everything’s getting squeezed in the music industry. Now you need to be a DJ if you want to make money with music. They’re the guys who make money! The truth is, though, that I don’t play music to make money; I play music because I love playing music, and I only play music with people I love.

Mark: Music is its own reward.

So how have you managed to deal with the rise of things like technology and streaming? Are you a supporter of it?
Cass: We’re all up on the tech stuff. I’ve had my own recording studios since the beginning of Skunk Anansie, so I’ve always been on the tech side anyway.

Mark: Ace is doing a lot of that as well, isn’t he? There’s a lot of video stuff going on as well.

Cass: I like a lot of electronic music too. I love hip hop, I love Drum’n’Bass, and it’s all just part and parcel of the same thing. I’m still trying to find the right way to integrate all the elements together.

So which new artists are standing out to you at the moment?
Cass: Vodun! It’s a three-piece band from England who I think are very good. I’ve been listening to a lot of hip-hop as well, of course we love Band of Skulls too.

Mark: Anathema. Can’t beat a bit of prog every now and then.

Prog hasn’t really made much a comeback since it was massive now, has it?
Cass: Since it died!

Cass: It’s like a dead corpse trying to resurrect itself, haha.

There aren’t many new prog bands around, though.
Mark: Yeah. Anathema are pretty good though!

Cass: There’s a lot of new music out there, but it’s just too much. I like Anderson .Paak, do you know him?

Cass: We should invite them out on tour with us. What a band!

And what a frontman, too!
Cass: It’s a dying art form too. Since bands like Oasis, when the frontman just stood there and expected to be adored, there hasn’t really been anyone. It’s nice to see someone like Ty Taylor entertaining the people like that.