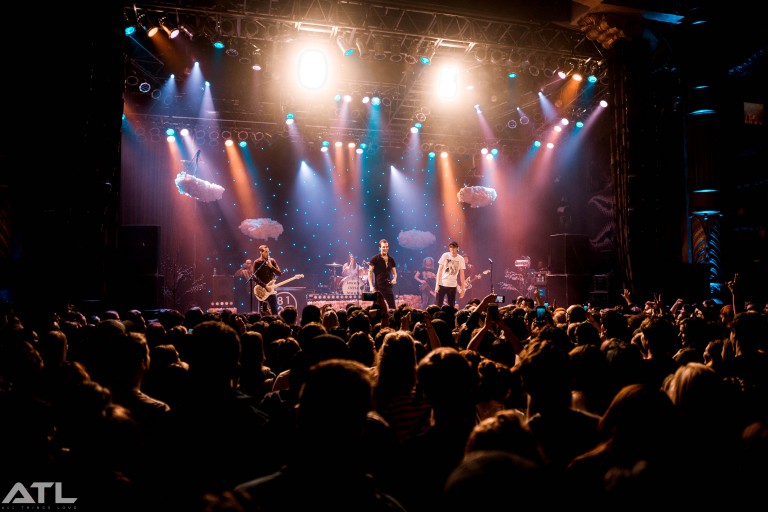 As festival season slowly but surely nears ever closer, the amount of weekenders worth getting excited about for yet another year grow larger and larger. Whether you’re getting down for a weekend in and amongst Rock am Ring’s German masses or Pinkpop’s pop royalty, June sure looks to be a busy month for all those concerned. Before we make the transition into summer, though, there’s still one festival worth ticking off the list: Slam Dunk. The massive tri-city spectacle will hit Leeds, Hatfield and Birmingham at the end of May, boasting a line-up bigger, better and heavier than ever. We’ve taken a good look at the expansive billing and picked out five bands who are sure to make your Slam Dunk experience unmissable.

ENTER SHIKARI
Look, does this even need any explaining? Enter Shikari are currently trekking across Europe in celebration of their stellar debut record Take to the Skies, which recently turned the ripe old age of 10. The album is one which permanently placed Rou Reynolds and co. at the forefront of our collective minds, following it up with a constant stream of career-defining records. Their sets at Slam Dunk will form part of the final three celebratory shows surrounding the album, surely making them unmissable for anyone who wants to witness a piece of British music history. Reynolds told us all about the jaunt in April, and you can read it here.

CROSSFAITH
You can’t go to a festival featuring Crossfaith and then somehow manage to miss out on their what-the-fuck-is-this-brilliance electronic hardcore. It’s worth noting that there are way too many ‘electronicore’ bands in the world today, and that it really takes some balls to pull it off. Luckily, this Japanese outfit are the pure definition of their genre, translating their musical output into a live show which causes more and more chaos as the days go by. They’ll be appearing on the Jagermeister Stage at Slam Dunk this year, which is apt considering their hardest hitting track goes by the name Jagerbomb. Make sure to down a few before you enter the pit, because you might need it to survive.

WE ARE THE OCEAN
Now, this is a set which you really can’t miss. This isn’t an attempt at over exaggerating the undoubtedly emotional rollercoaster that is a We Are the Ocean live show; rather, it’s a warning that the band are calling it quits after these shows once and for all. The Essex quartet don’t seem to have made as much of an impact outside of the UK as they’d hoped, having also been dropped by their former label Hassle Records at the start of 2016. Despite this, though, there’s only one thing which the band’s final shows can guarantee you: an absolute celebration of their best work, something which will surely bring together the fans who’d stuck with them through thick and thin.

FRANK IERO & THE PATIENCE
Despite the unwavering and seemingly constant associations with his former band (My Chemical Romance, as you may know), it seems to be the case that Frank Iero has well and truly become a solid solo artist in his own right. Together with his band The Patience, Iero put out an absolutely mental new record last year (October’s Parachutes, which he told us about here), which sees the musician put his heart on his sleeve in the most brutal and abrasive way possible. Iero’s live shows are raw, emotion-filled get-togethers best experienced whilst fully immersed in your (most likely sweaty) surroundings. Don’t miss out.

BLACK FOXXES
The great thing about Slam Dunk Festival is its emphasis on smaller, upcoming bands whose name wouldn’t usually be the first to spring to mind. This year, the festival has a whole stage dedicated to bands you’ve probably never heard of (Rock Sound’s Breakout Stage), yet the amount of great new music is so vast that these discoveries are spreading far and wide out onto other stages across each city. Appearing on the Key Club Stage this year are Black Foxxes, who seamlessly mix elements of grunge and alt rock to form a final product which sounds equal parts young and raw as it does arena-ready and anthemic. They’ve already toured with You Me At Six this year, and their summer run looks set to be packed with festival upon festival. Catch them before they hit the big time, because this time next year you’ll be kicking yourself.

Slam Dunk Festival takes place across three different cities: Birmingham (27 May), Leeds (28 May) and Hatfield (29 May). Get your tickets for Birmingham and Leeds here, and stream a festival playlist below.