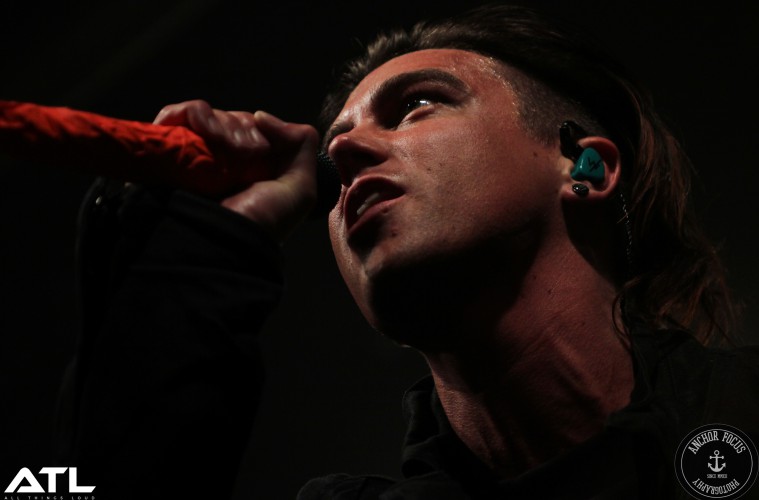 Sleeping With Sirens Kick Off Intimate European Tour in Amsterdam

Last night, Sleeping With Sirens kicked off their brief European tour with the first of two shows at Amsterdam’s Melkweg. The upcoming jaunt precedes an April-bound acoustic album titled Live & Unplugged, with various moments throughout last night’s show in promotion of this. 2015 release Madness also featured heavily, with the Kellin Quinn-fronted band slowly but surely starting to rely less on their former post-hardcore glories. This Wild Life, Beach Weather and Mallory Knox are joining the band as special guests on this run through Holland and Germany. Beach Weather opened the evening with a brief, energetic set which took in tracks from their only release so far, 2015’s What a Drag EP. You could sense that the crowd were unfamiliar with the American outfit, even if the pumped up New Skin received an enthusiastic response. Stripped back duo This Wild Life followed swiftly, with their subtle acoustics echoing nicely through a decently filled Melkweg. The crowd reaction to This Wild Life was slightly less subdued than the one which Beach Weather received, however this is likely due to the fact that Kevin Jordan and Anthony del Grosso have a relatively larger reach throughout the ‘scene’. One moment which stood out during their set was an eerie cover of Bring Me the Horizon’s Sleepwalking, something which made for a goosebump-inducing moment. Whether or not the duo can sustain a lengthy headline show in the future remains to be seen, however they did just the trick last night in front of a 1,500-strong crowd of diehard Kellin Qui-, no, Sleeping With Sirens fans. Cambridge outfit Mallory Knox were the evening’s third and final special guest, taking 2014 release Asymmetry to Amsterdam as a support act for the third time in 18 months. The band have never played a headline show in Holland before, opting instead to build a stronger fanbase through shows supporting the likes of Tonight Alive and One OK Rock. Based on their reception last night, it looks as if the time may have come for Mallory Knox to finally break away from the Support Act Curse and take the reigns themselves. The band’s 40-minute was received extremely well, with the likes of Ghost in the Mirror and Lighthouse standing out predominantly. Frontman Mikey Chapman definitely knows how to work a crowd, at times coming across as a man doing the job he was born to fulfill. Aside from tonight’s second night in Amsterdam, you should definitely expect Mallory Knox’s next show in Holland to be one which sees them topping the bill. Sleeping With Sirens took to the stage shortly before 9:30 as screams erupted all around the Melkweg and its metal balconies. It’s a well known fact within the ‘scene’ that Kellin Quinn and his band (this time round minus bassist Justin Hills) appeal to young teenage girls more than anyone else, something which remained unchanged last night (much to the dismay of parents watching from the bar area). Opening on the punchy Don’t Say Anything, the band went on to perform eight songs from 2015 record Madness. Frontman Quinn spent a majority of the set energetically bouncing around stage, his energy levels matched by the band around him. The likes of newer tracks Kick Me, We Like it Loud and Go Go Go all followed in quick succession, the former two making for the evening’s heaviest moments. Fellow Madness tracks Better Off Dead and Parasites followed, before the band dipped into their back catalogue on the bouncy Congratulations. Its powerful percussion, courtesy of drummer Gabe Barham, stood out as it underpinned gritty guitars, fuzzy bass and Quinn’s swaggering vocals. 2013 album Feel featured three times, with the emotional Satellites opening the evening’s two-song finale. A mid-set dip, featuring old track Who Are You Now, made for a less memorable part of the set which segued into a calmer section representative of the band’s upcoming acoustic album. A stripped back version of newer track Gold was followed by subdued fan favourite Scene One: If I’m James Dean, Then You’re Audrey Hepburn. In respect of the upcoming acoustic collection, the band opted to not play the full, heavier version of the song; rather, they performed a version taken from an older acoustic EP. A poppy rendition of The Strays closed the main set, its acoustic guitars (courtesy of Nick Martin) eventually accompanied by pounding percussion and a large chorus. “Hold on, don’t look back” sang Quinn as 1,5000 (predominantly) girls sang back ten times as loud. This is the kind of dedication which Sleeping With Sirens run on, with the energy present during an average show really being fed on by the band. The evening came to an end on the fierce If You Can’t Hang, a track which has stood out in and amongst the band’s back catalogue ever since it came out. It’s obviously no wonder that the band still choose to close their sets on the track, despite it sounding a world away from what the quintet have morphed into nowadays. You can say what you like about Sleeping With Sirens, but If You Can’t Hang will always be an absolutely spectacular track to witness live. From the band’s boundless onstage energy to the crowd’s booming vocals, it’s their incendiary release. Quinn and co. may not be everyone’s cup of tea, but they’ve certainly pulled all the right strings in getting to where they are today.