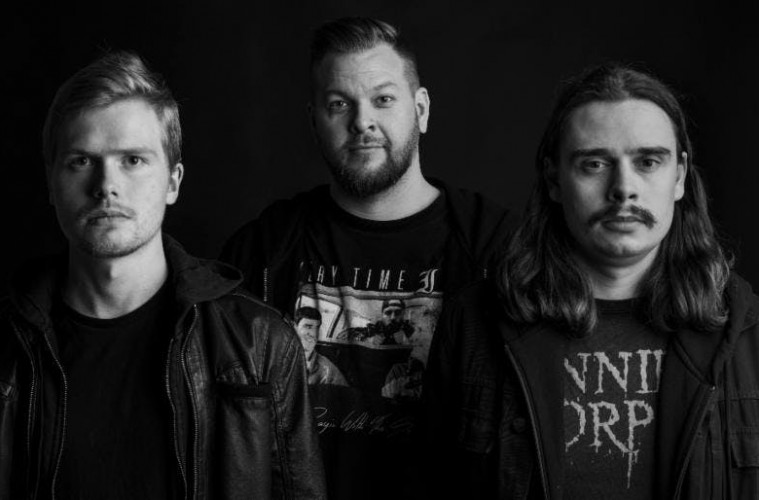 The Stories Behind Bokassa’s Crimson Riders

Earlier this month, Norwegian stoner punks Bokassa released their sprawling sophomore album, Crimson Riders. The release came towards the end of a long stint on the road with Metallica, for which the Scandinavian rockers served as openers. Jack Parker sat down with them to discuss the nine tracks with made up Crimson Riders.

The first track is called Brologue, an obvious wordplay on ‘prologue’. It’s a doom-y introduction where we added a cello, as we wanted to capture a horror feel. I always love records with intros, so that’s why we did that.

This is a classic Bokassa track. You have a groovy stoner riff, which goes into a hardcore verse and big chorus. You have a Slayer-esque breakdown with some oboes. It’s a nice transition from the slow start on Brologue, because it then hits you in the face with riffs and a fast tempo. I always think that you should build up the dynamic on a record: the slow one, the fast one, the big one, et cetera.

Vultures is the most daring song on the record, as it’s got a saxophone solo. That’s new territory explored; I already had the chorus done but I thought that it didn’t fit and would maybe work better in another band. Then I thought, “fuck it, I’ll do what I want” and we decided to use it for Bokassa. I do sing clean vocals on the last track of the first record, but not as clean as I do on Vultures. It’s probably the most melodic song on the record, and the most non-Bokassa Bokassa track. You can still hear that it’s us, though. It’s a natural progression.

The first single, which is one of my favourite songs on the record. To me it’s the perfect Bokassa song: there’s a stoner riff, a hardcore verse and a Scandic punk chorus. I do a Michael Jackson-y “Come on” at the end, and all my friends had to ask me if I was serious or joking. They all had a bet to see if that line was serious or a joke. It was a joke, though; I was drunk. I first tried a “Fuck yeah!”, and then an “Alright!” It worked really nice, because everyone who hears that song has it stuck in their heads afterwards. It’s a strange, intentional hook.

I saw a reviewer call this song batshit crazy, but in a good way. It starts with this stoner doom riff, and then it goes over into a New York hardcore beatdown and a great pop punk chorus. I’m an atheist, and one day I had to think about all of the people out there who believe in a God, and if one actually existed. They’d see how we live on this planet and come down to destroy us. It’s a dark song, but with a catchy chorus. I don’t think there is anything out there – even though no one can be sure – but I’d love to be wrong. You could call me an agnostic.

This is probably the hardest track on the album. It’s a bit of a strange and eclectic track which punches really hard; it’s like an explosion of music which is really special.

Captain Cold One is our attempt at writing the perfect “whoah” song. I was inspired here by bands like Pennywise and Bad Religion, who do a lot of that stuff. I heard that Daniel P Carter had a “whoah” special on his BBC Radio 1 Rock Show, and when I listened to that I thought to myself, “Yeah, I’ll fucking show ’em”. The lyrics are about how everyone has that friend who drinks too much and parties too much. The kind of guy who means well and has a good heart and good intentions, but is just an idiot. It’s an ode to the anti-hero. I can’t say the name of our anti-hero, though, because he’ll get pissed off. He heard this song and said, “Those lyrics better not be about me”. I told him they weren’t, but they are! Haha. He’s nice, but he’s always too drunk and gets thrown out of places. He means well though, he’s a happy boy. Maybe too well. Our guitar tech is also a Captain Cold One; I’ve never seen someone get so wasted without falling asleep. On our drive to the next town he sat in the van drinking by himself and singing Norwegian folk songs really loud. He went out and started pissing on the walls of the stadium, even though the toilets were right next to him. “I’ll piss where I want, so what!” he said. It’s a song which could soundtrack a lot of people, and live I think it’ll be favourite.

This one is more trashy. I’d call it more old Bokassa, as it’s quite brutal. It’s got a chunky riff, and we also did some Tibetian drum. We found a gong in the studio and decided to use it, so at the end we have an almost black metal-ish outro which sounds really cool. I remember thinking it was fucking stupid when the others proposed it to me, but I was wrong. It worked out nicely, and like with the saxophone I think we could explore more sounds in the future. I wanted to use a banjo on this album, but we couldn’t get one that was good. I used one on Divide & Conquer, but it was in such bad shape that we had to turn it way down in the mix; you can only hear it on the vinyl. It’s cool to have stuff like that on the album; I’d also want to try the rocking piano one day. We had a song which we dropped for Divide & Conquer which had a rocking piano in the chorus, but I’d love to try it again.

This is our own little space opera. We are continuing what we did on the first album, and everything we did on the rest of the album is in that song. There’s a cello, some black metal parts, a big doom riff and even a one-minute clean guitar part. If you listen really closely you can hear a wrongly played note, which fucking bothers me. We produced this album alongside someone else, but we kept arguing constantly. It got to a point where he got really drunk, so he showed up five hours late to the session. I was really pissed off as we had one week left to finish recording. “It’s about time you showed up, you fucking idiot” I said when he arrived, so at a certain point I started drinking and we had angry exchanges with each other. He told me I sucked at guitar, which wasn’t a good moment. I thought, “fuck it”, and then got so drunk recording the clean guitar that I played a wrong note.