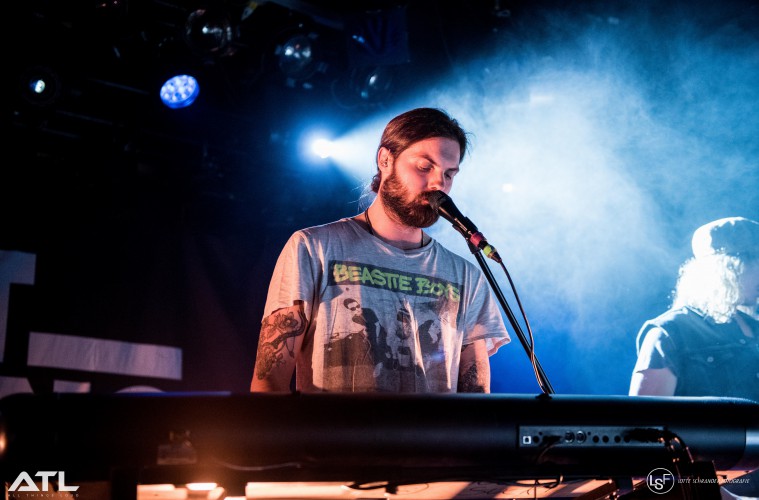 Sunset Sons have had an absolutely fantastic couple of years. After meeting in a French bar on the beach, vocalist Rory Williams, drummer Jed Laidlaw, bassist Pete Harper and guitarist Robin Windram have spent their time carefully working on their just-released debut album Very Rarely Say Die. Following an extensive European tour with Imagine Dragons, the band are now embarking on their own headline run. We spoke to drummer Jed Laidlaw (pictured below) ahead of a nearly sold-out show at the Melkweg in Amsterdam to talk about their humble beginnings, pranking Imagine Dragons and where they want to go from here. Hey Jed. How are you?
Good thanks!

You released debut album Very Rarely Say Die a couple of weeks ago. Can you tell us a bit more about the process behind the record and how it came to be what it is today?
We properly started writing it a couple of years back, although we actually started recording it 18 months ago. It took a while together, and that’s because we toured a lot. We ended up recording it with Jacquire King (Tom Waits, Kings of Leon, James Bay) and were out in Nashville for two months. We recorded fifteen tunes and them got back to Europe around about this time last year, going straight into a big tour and all the summer festivals. After the summer we continued working on the record, as we had a bunch of new tunes which we wanted to put on it. We thus decamped to the studio and recorded everything we had, and that included everything from Nashville as well as post-summer. So you mention Jacquire King there. What did he bring to the table and how did you get together with him?
How he found us I really don’t know. He called us and we all had a long Skype session with him, and we talked about the records we liked. We told him we thought was important about the recording process, too. We liked a lot of the stuff that he’d done before so it was great that he wanted to work with us. Eventually we went out to Nashville and it didn’t end up being that crazy. It was the most amazing studio with everything that we wanted. Each morning we would decide which song to work on that day, and then spent the whole day perfecting its sound and instrumentation. Jacquire tried to get a decent vibe going, which was like that little element which you can’t quite put your finger on. For each song we performed takes all together until we had a great one, which we would then overdub. Working on just one song each day really helped, so we did that for quite a while.

So were there any songs which didn’t make the cut?
There were, so we’ve probably got a few. It’s not that they didn’t make it because they weren’t good enough; rather, they just didn’t “fit in” with what was already on the record. We’ve got all the time in the world and a lot of stuff in our back pocket to work on, which is because we constantly write when we have free time. What influenced the record lyrically and musically? Anything in particular?
We’ve been together as a band for a while now. Alongside that we’ve also been four mates living the same sort of lives. We used to play rock ‘n roll cover songs in a bar for a laugh, but it wasn’t until a year later that we started writing our own stuff. When we started writing it was very easy because we’re all on the same page as musicians and as people. The music generally comes first and then we think of what we want to write about. Generally, we all understand we’re coming from with the topics. There’s a lot of love songs on the record, but also some nostalgic stuff and party tunes; every element of our life in the past few years is on the album. It’s all where we’re at right now, and you can easily see where we’ve come from and you should also be able to see where we could go.

You recently toured extensively with Imagine Dragons. How was it?
It was fucking amazing, to be honest. Nobody really knew what to expect because they’re a huge band, but we were all really happy when we got it. None of us actually knew much about them, though, to be honest. Haha. As soon as we met them and their crew they just welcomed us straight away, it was like a huge family. Usually, the support band goes on five minutes after doors and you get half an hour to play. Imagine Dragons, however, let us play to full rooms for as long as we wanted. We didn’t have a bad show in about forty arenas across Europe. Up until three weeks before Christmas we did loads of shows with them, and then we got invited to play more with them until the tour was over. It was just fantastic; we made loads of new fans, learnt how to construct our set and also how to calm down, haha. Was there anything which you learnt from them during the tour?
We learnt a lot, both onstage and off. They’re such a massive band and it feels really nice. I’d watch some of their show every night, if not all of it. They’ve been doing it for a long time, so it was good for us to learn how to play our songs to big crowds. Rory learnt a lot from Dan, who is an amazing frontman. They’re on top of their game and you just really want to watch them. Just like Ronaldo, he’s also on top of his game.

I just want to go back to your Amsterdam show. What exactly happened near the end of Imagine Dragons’ show?
Well, Rory got onstage and dressed up as a cheerleader to go and dance with Dan. On the first run of the tour everything ended in Zurich, and the band were upset that we didn’t prank them. They covered our drums in talcum powder and poured vinegar over our stuff, but their tour manager told us that they were upset we didn’t prank them. That’s why Rory went up there, and after that we also managed to move their dressing room signs around so that they thought their dressing room was in a broom cupboard, haha! Let’s just go back to the beginning, when you guys first met and just started out. Did you ever expect it to become something this big at the time?
So we met on the beach in a little French town. I was teaching people how to surf and on my first night there whilst travelling I met a lot of people. I basically called in to see my friend Woody and on the same night Rory was doing a gig in the bar. I’d been in bands before and I actually left Newcastle to get away from that. I saw Rory and I thought that I wanted to be in a band with him, so we met up and talked. We then eventually got together with the rest of the band. We were actually talking about this the other day, as it’s been so many years since everything happened. We left the whole cover thing behind three years ago and started writing our own stuff. I knew that we had something after we first wrote a few songs, but it does get scary once you stop to think about it. We’ve now sold out proper gigs in the UK (15 of them), which is great.

So where do you ideally see yourselves in five years’ time?
We just wanna keep going. We’ve got the record out, the gigs are good, and people keep coming to shows. We might drive each other crazy, but we’re just four mates having a great time.

Good luck tonight and thanks for your time!
Thanks man! All the pictures that appear in this interview are taken from Sunset Sons’ subsequent show at the Melkweg last night (13 April). (c) Lotte Schrander. You can stream Very Rarely Say Die below.