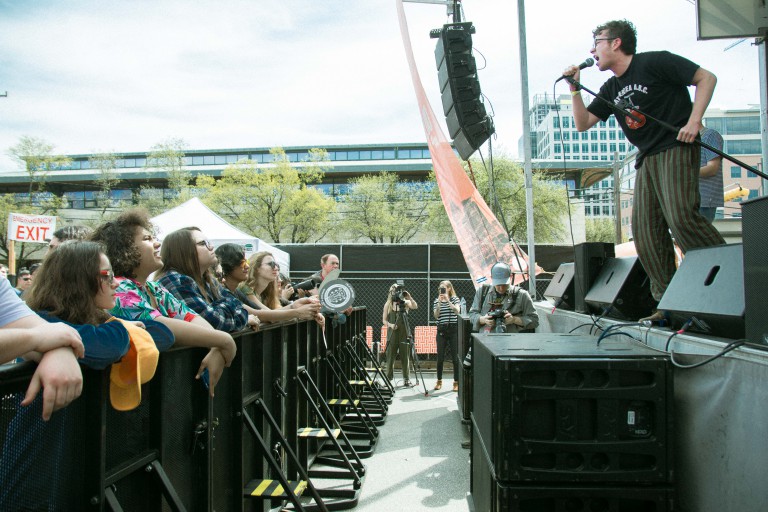 Next week, the world’s most important music executives and promising bands will turn musical capital Austin, TX into a sonic walhalla. South by Southwest (SXSW) has long been known as the most renowned and well-respected showcase festival the industry has to offer, with the saying going: “once you’ve made it at SXSW, you can make it anywhere”. This much rings true if you look at a small selection of artists who cut their teeth performing in front tough industry crowds comprised of critics, label bosses and the best of the rest. This year, the Texas conference festival has an absolutely mouthwatering line-up on offer, of which we’ve selected fifteen bands most definitely worth your time. Why they’re worth your time is something we’ve explained to you in sentence and song. More specifically in one sentence, with one song.

A collective of artists who make dance bangers for your next arty party that you want to actually be fun. One of the acts we’re most excited to catch this year.

A jazz guitarist, vocalist, and composer with improvisational jazz solos that must be witnessed live. Already a highly respected name in London, he’s quickly gaining traction in the States.

A young artist who can’t be contained by the singer-songwriter category, Matt Maltese shines on piano ballads both sincere and sarcastic. One of the few artists that needs no production to move his audience: his songwriting is confident, and with good reason.

This budding teenage star is part of the proliferation of lo-fi bedroom pop with a dark twist. Constantly collaborating and simultaneously focusing on producing, Sophie Meiers is part of the next wave of pop.

Rooted in R&B and soul, Pink Sweat$’s music reflects his transition from producer to songwriter last November with the release of his first EP. First track Honesty and its accompanying video have already blown up, so take this last chance to see Pink Sweat$ up close…

Ivy Sole is a rapper-singer who uses jazz chords along with trap and indie samples. Her songs are as lush as they are raw, and tones of spirituality and religion layer seamlessly over sexuality and, at times, hostility.

With roots in Americana and folk music of decades past, Laura Jean Anderson still manages to sound definitively modern with a silky voice and surprise moments of pop production.

New and exciting indie artist and songwriter who writes songs that feel fresh and intimate.

Songs that are simple, sensitive, and beautiful from an Austin-based singer-songwriter.

Tierra Whack’s unique take on rap and R&B has been making headlines lately, having recently released her debut album Whack World at the end of 2018. The album consists of 15 one-minute tracks with accompanying visuals.

With foundations in classical and jazz music, MUNYA studied at the University of Montreal before creating her own music featuring layers of synths, dreamy vocals, and hazy production.

SXSW takes place throughout the whole of next week in Austin, Texas. We’ll be bringing you uninterrupted coverage all week through our social channels. Check back this weekend for a second preview.