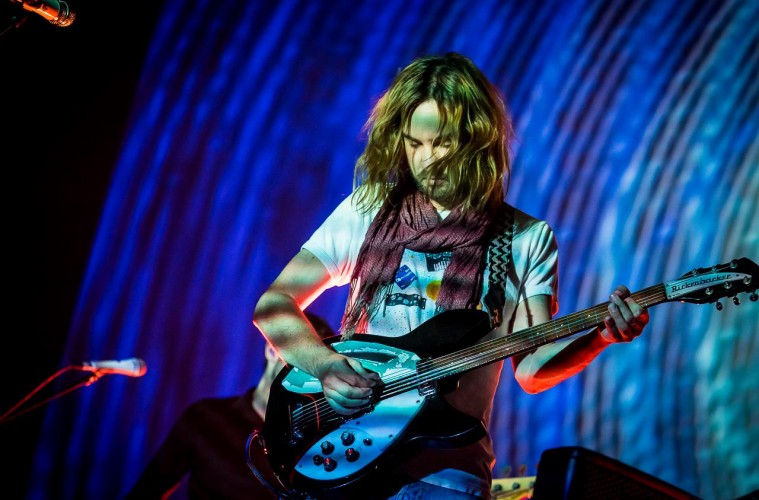 Cast your mind back to 29 October 2012. This was the last time that Kevin Parker-fronted psych project Tame Impala played a headline show in Holland (at the Paradiso). Stationed in front of the Aussie quintet were 1,500 baying fans who had all slowly watched the group grow from underground hotshot to a band worth taking seriously. Parker had just recorded and released the stellar Lonerism, and things were definitely going in the right direction. Now, fast forward to well over three years later – 29 January 2016. On this date, Tame Impala took to a sold out Heineken Music Hall in Amsterdam to prove that third studio album Currents is exactly why Parker and co. are one of the most formidable bands in the world today. All of this in front of 5,500 fans, too. Together with support from neo-psych dance trio Jagwar Ma, Tame Impala did exactly what they do best yet again, and that’s blow everyone away. Jagwar Ma are on the verge of announcing their sophomore studio album, which is set to follow 2013’s exciting Howlin’. Opening their 40-minute long set on classic stomper Uncertainty, Jagwar Ma (who consist of frontman Jono Ma, bassist Gabriel Winterfield and producer Jack Freeman) made one thing very clear from the off – nobody was supposed to stand still. Sure, people still chatted away, yet it didn’t stop a big chunk of the crowd in getting loose to the sounds of new Australian music. In and amongst older tracks, which further included the groovy Man I Need and set closer Come Save Me, Ma and co. played a handful of new tracks taken from their as-yet-unannounced second album. Of these, Obi Wan’s eerie melodies and dark dub beats stood out the most. Having performed most new songs for the first time the night before during their show in Rotterdam, everything still sounded relatively fresh and adaptable. Whether or not these songs are in their final form remains to be seen, however Jagwar Ma seem to be having very little trouble with the so-called Second Album Syndrome. As Jagwar Ma left the stage, tension built and the Heineken Music Hall’s generally stale atmosphere intensified into something which felt almost spiritual. Tame Impala’s road crew, all dressed as scientists, seemed to preparing a ritual, one which Kevin Parker and co. would subsequently carry out over the course of 90 intense minutes. From the off, it’s very clear that Tame Impala’s live show is a visual-centric spectacle. Whirring green dots opened the show as the band kicked into a colourful instrumental intro, leading into 2015’s best song – Let it Happen. Parker and co. were bathed in projectile-lighting as four-to-the-floor percussive sections and sharp guitar stabs intertwined to form an absolute banger of a disco track. It may not be Bee Gee’s-era disco, but it certainly takes elements from that era and twists them around. “Something’s trying to get out, and it’s never been closer” sang Parker, before Let it Happen’s memorable melody entered the frame. From this point onwards, the track becomes an unforgettably magical opus drenched in confetti, vocal effects, Cam Avery’s fuzzy bass and the sound of everything beautiful coming together at once (something which is result of equal input from Parker, Avery, Jay Watson, Dominic Simper and Julien Barbagallo). There aren’t many better ways to kick off a show than on Let it Happen, even if it means that the bar has been raised very high. Lonerism cut Mind Mischief followed, utilizing gritty funk-laden guitars and a soulful vocal tone which added to its airy undertones. Five songs from Lonerism featured, including following track Why Won’t They Talk to Me? Like most tracks on the stunning 2012 record, Parker sounds lonely and isolated. Live, Lonerism’s output sounds less confined and more exploratory, almost as if Parker is embracing his former loneliness and releasing it to the world. It Is Not Meant to Be, taken from 2010 debut Innerspeaker, drags Impala’s history further back in time as all elements of their modern day disco are quashed by no-nonsense psychedelia. Although performed in a modern setting (one which doesn’t feature former member Nick Allbrook), the band still manage to take It Is Not Meant to Be and perform it almost as if we were back in the small room of the Paradiso during 2010’s London Calling Festival. “In all honesty, I don’t have a hope in hell” sang Parker, not quite certain of what he’d be up to six years later. Newer track The Moment made for a synth-heavy contrast which ensured that not too many new age Tame Impala fans became too confused by the band’s deepest Innerspeaker cuts. New age Tame Impala fans obviously refers to those who fell in love with the band on the back of new album Currents, which sees Parker obsess himself with slickly produced pop, RnB and disco. The Moment falls under all three of these categories, much unlike hit track Elephant. It’s often said that Elephant is the essential Tame Impala track, one which not just helped them reach big audiences, but also the one which helped Kevin Parker somewhat hit the big money jackpot. Commerciality aside, Elephant is the best thing which Parker has produced on both a lyrical, musical and visual level. With dark red projections and strobe flashes (the former of which are all designed by Parker himself), Lonerism’s maroon imagery receives a nice companion on the stage. “He pulled the mirrors off his Cadillac, ‘cus he doesn’t like it looking like he looks back” may well be one of the best lines ever written, and it doesn’t even sound a day old when Parker pulls it out of the vocal bag with his best stab at nonchalance. Slow ballad Yes I’m Changing followed an RnB-flecked path, with Parker walking around stage barefoot (a common habit for him) as he got closer to the crowd than he’ll ever get – that is, seated on the edge of the stage. Funk banger The Less I Know the Better made for the most disco-ready moment of the evening, as well as one of the biggest crowd reactions. Flittering between a four-to-the-floor rhythm section and hypnotic vocals, the new single is an absolute stunner of a track. It’s not very often that songs like this come along, meaning it’s even more exciting when they do. Currents slow burner Eventually was the third consecutive new track to appear, encompassing more RnB grooves and deep, dark bass wobbles. Here, the focus is definitely placed more on the bassline than it is on Parker’s vocals. The guitar line is almost invisible, meaning that the only thing which really holds the track together is a bout of synth and bass wobbles. As the main set ever so slowly headed towards an end, Parker and co. made time for a couple of very deep cuts. The first of these, Alter Ego, pulsated along nicely as the whole stage was covered in swivelling light structures and the occasional laser. A prominent melody lead the way through most of the track, before Parker interjected with a few verses. It’s very evident that, although Tame Impala are still the same band today as they were six years ago, their music has changed so much over the last few years. This change is primarily evident in a structural forum, in particular due to the way in which songs like Let it Happen and The Moment follow such a rigorous structure which wouldn’t have appeared in the slightest on Innerspeaker. Fellow old track Why Won’t You Make Up Your Mind? followed a bit later on, making for a huge reaction from the crowd. These two older tracks were split up by the RnB-heavy ‘Cause I’m a Man, one of Currents’ highlights. From its dark, groove-laden bassline to Parker’s enormous chorus, ‘Cause I’m a Man is an absolutely encapsulating track. The main set came to an end on Apocalypse Dreams, quite potentially one of the biggest tracks of the evening. Starting slow with a simple structure predominantly helmed by drummer Barbagallo, Apocalypse Dreams slowly but surely morphs into a psychedelic monster which, live, is on a completely different planet. The second half of the song is so dreamy and woozy that you’re bound to get lost in the music one way or another, whether you want to or not. “It could be the day that all our dreams come true, for me and you” sang Parker, his voice drenched in a summery vocal tone. Once you think that the song is over, the band slow things down and eventually come back to hit you with another sprawling passage. Returning to the stage for a two-song encore, it’s ultimately clear that Tame Impala are victorious. Parker couldn’t be happier with the reception the crowd gave him and his band tonight, repeating pleas of gratitude often. Fan favourite Feels Like We Only Go Backwards was up first, Parker’s lead vocals contrasting serenely with keyboardist Jay Watson’s higher tones. Although a funk-laden bassline holds the track together, the song sounds less funk and more psychedelic than most other danceable Tame Impala tracks. Sure, it’s a slow groove, but that doesn’t mean the groove isn’t there at all. The final song of the evening came in the form of New Person, Same Old Mistakes, which was performed live for the very first time. Ahead of the track, Parker warned of “imminent fuck ups” and worry at performing the song live for the first time. Not that this was necessary, though. The clever utilization of beautiful visuals and plenty of confetti ensured that the show came to an end which it had well and truly deserved – one which was bathed in glory and victory. Kevin Parker may have proven himself to be a living incarnation of god, but that doesn’t mean that he’s able to do this all by himself. Massive credit must go out to Parker’s disciples Dominic Simper, Jay Watson, Cam Avery and Julien Barbagallo, four musicians so talented that they form a whole coherent enough to pull off Parker’s masterpieces effortlessly. Tame Impala are nowhere near done for now, with this Amsterdam show the first of a packed year. Rumours as to which Dutch festival they’ll appear at later this year are rife, although all signs are currently pointing to a headline slot at Down the Rabbit Hole. Wherever Tame Impala wind up, though, it’s bound to be nothing less than legendary.