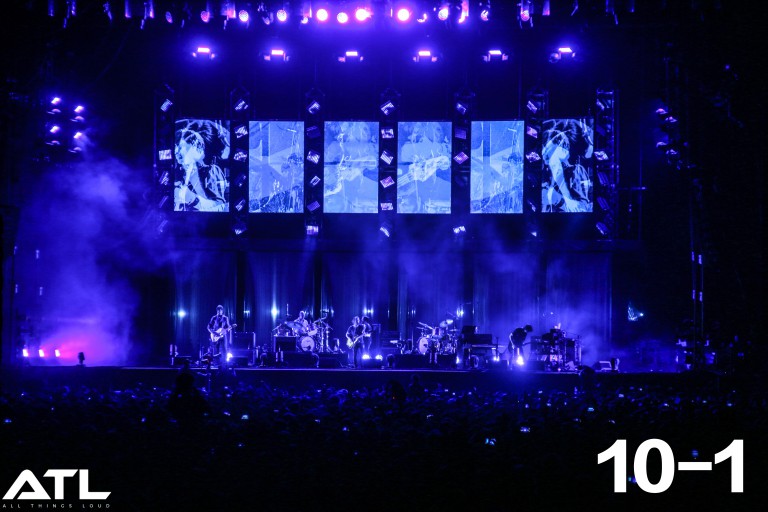 After a week of counting down, we’ve finally reached the 10 best albums that 2016 had to offer. The last twelve months have been an absolute musical whirlwind, with fantastic records popping up in all four corners of the planet. Find out which albums we ranked as the best of the best below.

10 Lonely the Brave – Things Will Matter
What guitarist Mark Trotter said about single Dust & Bones: “There’s a classical composer I really like, and there’s a track where two violins interplay. It’s beautiful how they bounce off one another, and I wanted to replicate that. The way they interplay and move between each other is a bit like a dance, and it inspired me to write what became Dust & Bones. The high and low guitar lines in the chorus are an example of this. We have a big middle section on the track which worked really well, and lyrically it’s very personal to Dave. It’s just a beautiful insight into what he was thinking.” 9 Milk Teeth – Vile Child
What the band said about their approach to songwriting: “It’s different, really. We have a practice space where we live, and when we go there someone might come in and be like, “I’ve got some riffs” or “I’ve got these lyrics, let’s make it work around that”. It’s basically just people with different ideas in the same environment around each other. We don’t do anything stupid like go into a ‘special’ room and only have one type of drink. It’s nothing special, we just work off each other.” 7 Avenged Sevenfold – The Stage
What we said about The Stage’s surprise release: “way with months of waiting and teasing, Avenged Sevenfold’s subtle “one single and then out”-method may well be the way forward for heavy metal and hard rock. It might take a while for other bands to muster up the courage of capability to follow in their footsteps, but it can be done. And if there’s anyone out there who can lead as example, it’s Avenged Sevenfold.” 6 Slaves – Take Control
Guitarist Laurie Vincent on what makes Slaves so angry: “Just seeing everyone be so miserable. All the people we grew up with hated their lives; having to go to uni and being told by the ‘system’ that they have to go to school and get a job. It’s just sad to watch everyone else just being filed into line without being able to think for themselves. I guess that’s what just makes me so angry. We sort of bucked the trend, as we don’t really need to do that. We know it’s possible, so it really annoys me to see people who are not living their life.” 5 Biffy Clyro – Ellipsis
Bassist James Johnston on the influence of the relaxed American mindset: “It probably makes us more uptight, haha. The songs were already written at home, and we all knew about their performance and their parts back then. LA wasn’t really a huge influence on that; rather, it was more the frame of mind that people have there as opposed to the more guarded and cynical outlook people have in Scotland. That juxtaposition was nice to have, but it didn’t change who we are as people. It obviously changes the way you are at a particular time, but nothing influences it.” 4 Whitney – Light Upon the Lake
What frontman Julian Ehrlich said about album finale Follow: “This one is about my grandfather dying, and it was in the middle of the weird transition that we were having. He had cancer so many times, like eight or nine times throughout his latter years, and the song came around a weird time where Max and I had both lost our apartments and were in the middle of writing this record. By circumstance we had to go to Wisconsin to Max’s parents cabin because we didn’t have anywhere else to stay. I had written the initial chord progression and I had the melody to it, so when we got to Wisconsin we workshopped it pretty hard and finished the lyrics after that. It became Follow, and a week later I went to my grandfather’s funeral. I gave the song to my grandma, and she played it over the loudspeakers for a group of 300 people that had known him throughout his entire life. It was a really intense moment, I don’t think I’ve cried that hard in my whole life. It was great to be able to do that for him, he was the hardest working man I’d ever known.” 3 King Gizzard & the Lizard Wizard – Nonagon Infinity
What we said: “The whole concept behind Nonagon Infinity is an idea which only King Gizzard & the Lizard Wizard could think up, and it’s probably one best listened to on a whole host of mind-altering hallucinogens. That’s not to say that you shouldn’t enjoy the record sober, because regardless of your state of mind Nonagon Infinity is a record which is bound to mess with your senses and take full control of your mind. It’s going to be an ambitious endeavour to play these tracks live, although King Gizzard are such masters of their craft that they’ll probably be able to do this time and time again. Who knows, by the time they properly tour Nonagon Infinity they may have even written and recorded its follow-up. For now, though, let’s simply try to enjoy the mind-altering journey which Nonagon Infinity takes you on whilst spinning you around and refusing to let you go whatever it takes. Because it’s one hell of a journey, boy oh boy.” 2 The Growlers – City Club
What we said: “Sure, City Club doesn’t sound like the band that people learnt to love; rather, it takes the their most eccentric qualities and helps transform them into a band who will one day hit stratospheric heights. The abrupt departure of Montoya and subsequent disappearance of Braun Perry may have both come at unwilling times, but with a band as dynamic as The Growlers (who are now signed to Cult Records) there’s no way in predicting what will happen next. Picking Casablancas to produce the record is a risky choice which has ultimately paid off, but it won’t come without doubts from diehard fans and confusion from critics who will ultimately realize that City Club is the only real direction this band could have headed in. “I wouldn’t have it any other way”, as Nielsen himself sings towards the end of Speed Living. Brooks is a man who knows what he wants, and that’s something which City Club demonstrates through and through.” 1 Radiohead – A Moon Shaped Pool
What we said: “Certain tracks do outshine others on A Moon Shaped Pool, however the final package does represent a band who have made an album which is worth listening to from start to finish. It’s not necessarily a concept album, but each song still feels like an individual piece of a puzzle which started in 1995 and is still, here in 2016, relatively incomplete. Where can Radiohead go from here? Musically they may have explored quite a lot of avenues, yet it’s just as interesting to consider the various ways in which they’ll surprise the world from a promotional perspective. Will they drop LP10 out of nowhere? Or will they, for the first time since 2003, stick to a regular promotional campaign? Who knows. One thing that we do know, though, is that A Moon Shaped Pool is the literal kick up the backside which the music industry needs to be able to keep itself relevant and thinking on its feet. Bravo, Radiohead.”