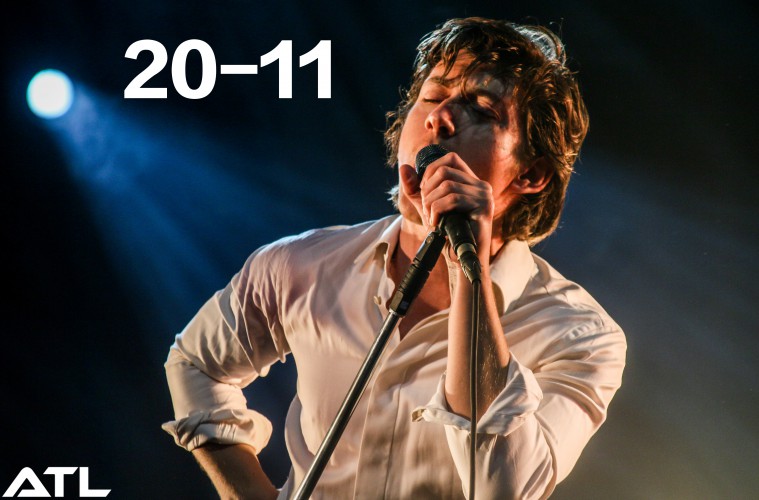 19 Kaiser Chiefs – Stay Together
What we said about the band’s set at the Paradiso in October: “Let’s be honest: Kaiser Chiefs are not as musically ground breaking as they used to be. However, they have managed to remain successful by taking their old sound and reinvigorating it to the point where they sound like a band reborn. Wherever they go next remains to be seen, however it’s sure to be exciting. For now, though, expect to see the band play absolutely everywhere and anywhere as they take Stay Together all over the world.” 18 The Last Shadow Puppets – Everything You’ve Come to Expect
What we said about the band’s set at Lowlands Festival in August: “One set which did meet expectations, though, was The Last Shadow Puppets’ triumphant show on the Alpha stage. New album Everything You’ve Come to Expect sees Alex Turner and Miles Kane head down an orchestral path, having subsequently introduced a four-piece string section to their captivating live show. New tracks Bad Habits and Aviation made for early highlights, both of which were preceded by a handful of older tracks (Calm Like You, Separate and Ever Deadly & The Age of the Understatement). Alex Turner has finally found his place as an all-conquering rock legend, with his stage presence unbeatable and second to none. Compatriot Miles Kane may take more of a vocal backseat for the duration of the show, but it’s undeniable that his guitar-centric additions are nothing less than sublime. The Last Shadow Puppets may be a side-project, but it’s certainly one of the most successful supergroups to hit the charts in recent years.” 17 Beyond the Wizard’s Sleeve – The Soft Bounce 16 Capsize – A Reintroduction: The Essence of What Surrounds Me
What we said: “Why Capsize, though? Why not counterparts like Hundredth, Landscapes or The Color Morale? Well, Capsize have something which is undeniably special. A Reintroduction… isn’t just a metalcore-by-numbers record; rather, it’s an opus which comes from the heart. It won’t be long before bands like Capsize (and their counterparts) start to change the way in which we not only listen to metalcore, but also how we perceive it.” 15 Mystery Jets – Curve of the Earth
Frontman Blaine Harrison on the story behind Midnight’s Mirror: “It’s a metaphor for how you can end up feeling after a long time in a place where different rules or social norms apply. It’s like looking for a broken mirror.” 14 Black Mountain – IV
What keyboardist Jeremy Schmidt said about the album’s inception: “We did a lot of jamming in the rehearsal space which we use. We would start playing and pick out things which we’d accidentally land on, and which we thought we could turn into something good. Steve (McBean, vocals) had some songs written, and Amber (Webber, vocals) had some written too. We had some riffs, drum motifs and chord progressions which we liked and eventually just worked on. It was essentially just a case of throwing everything against the wall and seeing what sticks. At the end of it all, an album starts to take shape and we subsequently hammer it out into shape.” 13 M83 – Junk
What we said about the band’s set at Lowlands in August: “French electro pioneers M83 closed out the Heineken stage afterwards, presenting the crowd with new album Junk alongside a barrage of strobe lighting and boundless energy. Project leader Anthony Gonzalez has a great live vocal range, something which he presented on Do It, Try It and classic track Midnight City. Guest vocalist MAI LAN joined the band onstage during new single Go!, which is one of the best tracks released so far this year. They may have slightly slipped under the radar this time round, but M83 look like they’re definitely here to stay.” 12 The Avalanches – Wildflower
What we said: “There’s so much going on throughout Wildflower that it’s impossible to mention even half of it. With every listen of the record, you’re bound to discover new samples and hidden layers which you never knew existed, such as children’s choir renditions of Beatles tracks, Bee Gees fan favourites or little hints of a Queens of the Stone Age classic. This is exactly what makes the trio so special, because there really is no-one out there who even slightly resembles their sound. Sure, they’ve now added live vocals to some tracks, but the pure essence of what The Avalanches are all about is still well and truly alive. Welcome back, guys.” 11 Pierce the Veil – Misadventures
What frontman Vic Fuentes told us about the track he best connects with on Misadventures: “All of them, because they’re so personal. I mean, I think that Phantom Power & Ludicrous Speed was probably the most relevant one during the making of the record. I was feeling like I was being pressured and surrounded by people who didn’t understand what I was doing; the kind of people who weren’t letting me just do my thing and create music without breathing down my neck and yelling at me to finish it.” Check back tomorrow for the Top 10.