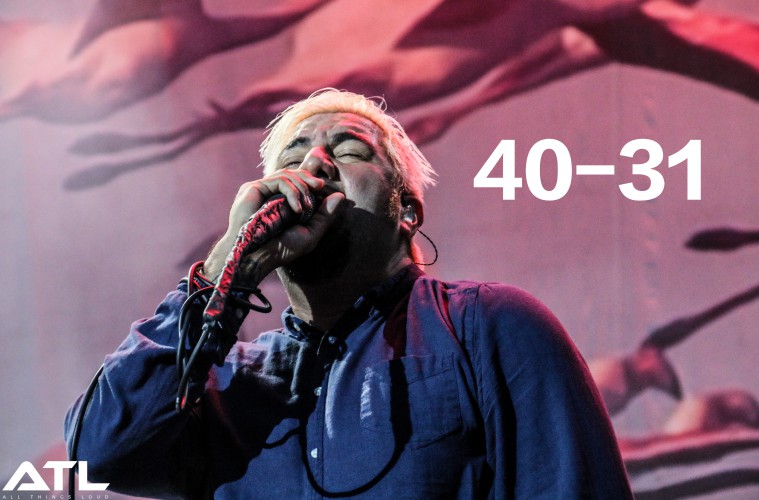 Last week, we introduced you all to the first instalment of The Best Albums of 2016. With the likes of Against the Current, Panic! at the Disco and letlive. all featuring, it was anyone’s guess as to who would further feature in the list. Now, we can unveil the second part of our countdown: albums 40-31.

40 ROAM – Backbone
What the band told us about the local UK scene earlier this year: “The fact that the scene is growing is great for everyone, as we all benefit from it. Fans don’t go to just one show per year. They’ll go and see Boston Manor, they’ll go check out ROAM, they’ll watch Trash Boat, and everyone is just stoked about everything” 38 Shearwater – Jet Plane & Oxbow
What frontman Jonathan Meiburg told us about the record: “I started thinking about what it meant to be part of the USA and growing up in America. I didn’t want to make a preachy, slogan-infused record; rather, I wanted to make an emotional one. I think there are some pathogenically strange American cultures which will always be with us, and that can be frightening.” 37 Green Day – Revolution Radio
What we said: “I want to start a revolution, and I want to hear it on the radio” declares Armstrong during the aforementioned Forever Now, and this is the one line which perfectly demonstrates his band’s mission objective throughout the whole album. 2016 is a year of change, and it’s also doubling up as a year in which Green Day re-emerge from the undergrowth and prove exactly why they’re keeping the spirit of punk well and truly alive. Welcome back, guys.” 36 Warpaint – Heads Up
Guitarist Emily Kokal on the story behind lead single New Song: “It was a fun exercise to write something more distinct, and then it also didn’t seem like it was lacking anything in specific. We continued to work on it and almost didn’t even put it on the album because we forgot about it. When we rediscovered it Jake told us that he really wanted it on the record. There were things about New Song that maybe didn’t feel right, but we love it. There’s a lot of things going on and there were many different directions in which we could go, but New Song always felt like a perfect first single.” 33 Deftones – Gore
What we said: “Gore may be an album which draws from a lot of the same sonic influences, but it’s also one which has enabled Deftones to present the world with one of 2016’s best heavy albums yet. A continuous stream of Stephen Carpenter’s haunting guitar lines and Chino Moreno’s magnificent vocals form just one part of a fantastic musical combination, with drummer Abe Cunningham, keyboardist Frank Delgado and bassist Sergio Vega bringing just as much to the table. It may have taken them four years, but Deftones are back stronger than ever.” 32 PJ Harvey – The Hope Six Demolition Project
What we said about PJ Harvey’s headline set at Down the Rabbit Hole in June: “Headliner PJ Harvey followed on the Hotot stage afterwards, with her huge live show encapsulating the crowd for a solid 75 minutes. New album The Hope Six Demolition Project featured heavily throughout the set, with Harvey even taking the opportunity to address Brexit by reading out a heartfelt poem from 1624. Her new album is a musical documentation of the world’s key warzones (Washington DC included, unsurprisingly), and it definitely hit hard in Beuningen. She’s been out of the game for a long time, but her return is so well-timed that we couldn’t begin to imagine a musical spectrum without Polly Jean. She doesn’t just know how to make a statement; rather, she knows how to hit that statement home with her powerful musical missives. And we wouldn’t have it any other way. Welcome back, PJ.” 31 Harts – Daydreamer
Harts on being mentored by Prince: “Prince tried to impact that knowledge in me and help me out in any way that he could. He was really excited about the future of music and really wanted me to focus on guitar playing. He was trying to persuade me to be more than what I was at the time, which was an all-round musician, songwriter and producer. Since then he always kept in touch with me and kept tabs on what I was doing, all the way up until he died. It was an amazing experience to have a mentor like that and I’m still in shock.” Check back tomorrow for the third instalment of our countdown.