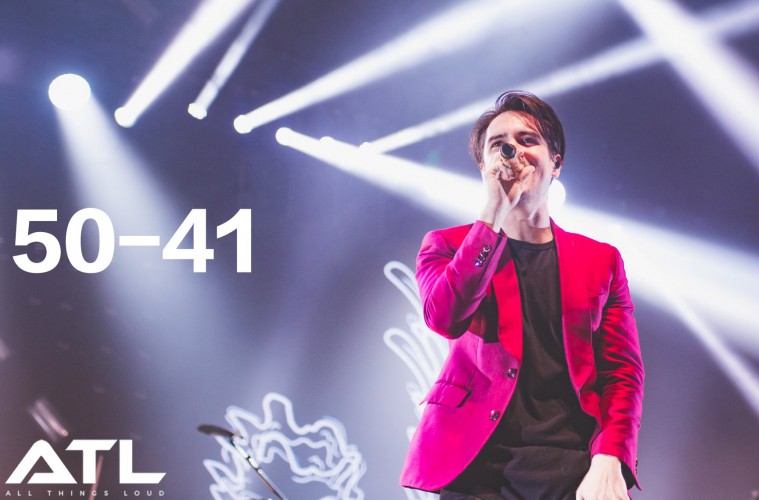 It’s safe to say that 2016 has been a year of ups and downs. From the deaths of David Bowie and Prince to the grandiose return of Radiohead, there have been plenty of moments worth either cherishing or banishing to the back of your mind. With exactly a month to go until 2016 makes way for 2017, we’ve decided to kick off our annual Album of the Year Top 50 countdown. As per usual, it’s been an extremely tough list to compile. However, after much deliberation a final decision seems to have been made, and that is one we’re excited to present to you now with the first instalment of our countdown: 50-41

50 Storm the Sky – Sin Will Find You
What we said: “As the record comes to a close on the miserable Burning, it’s still clear that Storm the Sky have succeeded in holding up a mirror and reflecting on the world in which we live today. We live in a world where the millennial is the future, a world where everyone is too scared to think of what could happen next. And Jarratt is scared, too. There’s a devil on his shoulder, and he’s trying to shake it off by means of a ruthless brand of honesty which sees him delve into the deepest and darkest crevices of his inner thoughts. If Sin Will Find You doesn’t draw you in from the moment Second Best opens its doors, then you’re doing something wrong.” 49 Jimmy Eat World – Integrity Blues
What guitarist Tom Linton said about the record’s creation: “Integrity Blues was actually the longest break that we took. We really stepped back after out last tour and took a long break, and after that we got together and decided to make a different which was different to anything we’d ever done. Why make a record otherwise? We found Justin (Meldal-Johnson) to produce it, and he’s really knowledgeable about a lot of different keyboard-based stuff.” 48 Dinosaur Pile-Up – 11:11
What the band said about lead single 11:11 in an interview with All Things Loud: “11:11 was the first song I wrote for the album that sounded like the new album. That was the first tune that made me go, “shit, that’s the sound of the new record”, or at least what I’d envisaged to be the new record. That only came from when I took it home as a demo. We’d also been fucking around with that riff in rehearsal, but we thought it was too stupid or heavy to do anything with. I took it home and played around with it, and it became that. Lyrically, 11:11 is a bit vague.” 47 Beaty Heart – Till the Tomb
What the band told us about Raw Gold: “That’s our most recent single, and it was co-written and co-produced by the guys in Jungle. We were talking to those guys at the time that we wrote it, and back then it was a wavy slow-jam. We played it to Jungle and they said, “we think it’s great, but we want to hear more of the bass”. We rewrote it, and then it turned into a bit of a disco banger. It’s Till the Tomb’s feral beast.” 46 The 1975 – I Like It When You Sleep For You Are So Beautiful Yet So Unaware Of It
What we said: “Had you taken away the record’s instrumental interludes, you would have a normal record which doesn’t sound a) too egotistical or b) overbearing. However, The 1975 have done their best in trying to avoid both options. 17 songs over 75 minutes and an album title longer than most indie band’s careers seems overbearing, but it’s what we’ve come to expect from The 1975. Don’t expect this flame to die out any time soon, because Healy and co. sound like they’re here to stay.” 45 Panic! at the Disco – Death of a Bachelor
What we said: “As you lose yourself in Impossible Year’s final moments, one thing is becoming ever clearer – Panic! at the Disco are no longer the band that everyone grew to love. Instead, Urie has taken everything which was at the core of the band and transposed it into something completely different.” 42 Hellions – Opera Oblivia
What we said: “On paper, Hellions may not seem like a band who are ready change the musical soundscape; on record, though, they come closer than anyone else in changing the way heavy music is perceived by the fan as well as the outsider.” 41 Against the Current – In Our Bones
What we said: “Sure, most pop rock bands can be pretty predictable, but Against the Current have something special. They don’t stick to one formula which they regurgitate twelve times; rather, they take the core basics of pop rock and expand on them in various different manners. There’s definitely a bright future out there for Costanza, Gow and Ferri, that’s for sure.” Check back next week for the second instalment of our album countdown.