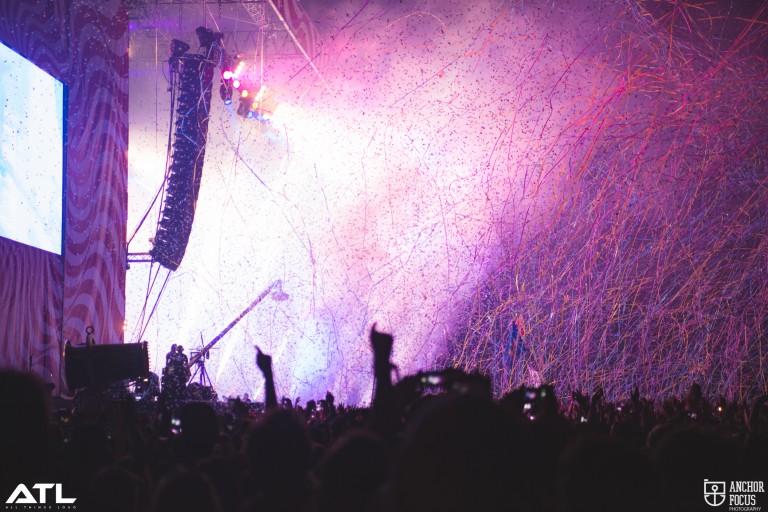 In five days’ time, Biddinghuizen’s Walibi World terrain will open its door to 50,000 revellers as Lowlands Festival returns prominently to Holland’s festival landscape once more. Following an off year in 2015, which saw only 75% of tickets shifted, the weekender is back at its best with a line-up that boasts the likes of Muse, Noel Gallagher, LCD Soundsystem and Sigur Ros. With only a handful of days left until proceedings kick off, it’s time to list five things which you ought to expect during Lowlands’ best musical attractions this year.

ANTHEMS, BOMBAST AND CONFETTI DURING MUSE’S MEGA SHOW
Muse will headline the Alpha stage on Friday evening in what will most likely be one of the most explosive sets Lowlands has ever seen. New album Drones is a monolithic concept record which encompasses huge riffs and swooping orchestral moments from start to finish. Its transition to the live stage has been nothing short of stunning, something which you can’t deny after experiencing their current arena show spectacle. It’s the biggest booking that Lowlands has ever made, and this is something which Matt Bellamy and co. will more than prove on Friday night when they introduce Biddinghuizen to a majestic plethora of smouldering riffs, crushing rhythms and enough confetti to last a whole weekend.

EVERLASTING NOSTALGIA DURING NOEL GALLAGHER’S SET
It’s no secret that Noel Gallagher (and his High Flying Birds) likes slipping a selection of Oasis classics into his career-spanning live show. In fact, amongst the classics is staple set closer Don’t Look Back in Anger, by far one of his most prominent offerings. Pair that with new album Chasing Yesterday and you’ve got a live show filled to the brim with enough anthems to last a lifetime. If you manage to make your way to the Bravo tent for Noel’s tent, then make sure that you’ve equipped yourself with just enough cider to rival your boundless energy and need for nostalgia.

TEARS AND EMOTION DURING SIGUR ROS’ HEARTWRENCHING SHOW
Icelandic dream rockers Sigur Ros are the only band on this planet who can silence a whole field with their picturesque and melancholic mixture of Hopelandic (a made-up language consisting of gibberish phrases) and Icelandic. Not that it’s all about the lyrics, though; rather, Sigur Ros’ driving force is their eclectic selection of orchestral undertones and interesting utilizations of instrumentation. The band, currently a three-piece, are busy working on their eighth studio album together with producer John Congleton, having taking some time off to bring their emotionally intense live show to European shores. Expect new material, but first and foremost expect the classics (such as the instantly recognizable Hoppipolla) to echo majestically through the Alpha.

RIFFS, RIFFS AND PITS COURTESY OF SUM 41, KING GIZZARD & THE LIZARD WIZARD, BIFFY CLYRO ET AL.
It wouldn’t be Lowlands without a magnificent barrage of riffs flying in from all corners of the guitar-driven rock world. In the punk corner you’ve got Sum 41 flying the flag, with hard rockers Biffy Clyro and psychlords King Gizzard & the Lizard Wizard also present in Biddinghuizen. That’s not all, though; Lowlands has something for everyone, whether that be hardcore punk (Frank Carter & the Rattlesnakes & John Coffey are notable recommendations), nu-metal (Hollywood Undead) or frazzled rock ‘n roll (Thee Oh Sees, Wolfmother & Eagles of Death Metal). Hell, even moshpit masters Parkway Drive and emo hotshots Sleeping With Sirens are part of the party this year. As a guitar-lover, you really can’t go wrong at Lowlands.

AN INDIE DISCO WET DREAM FEATURING FOALS, THE LAST SHADOW PUPPETS AND LCD SOUNDSYSTEM
Let’s get one thing straight: 7:30pm onwards on Sunday is every indie disco fan’s wet dream. First, you’ve got Arctic Monkeys frontman Alex Turner strutting his stuff onstage with Miles Kane (aka The Last Shadow Puppets, who are touring the brilliant Everything You’ve Come to Expect), before the almighty Foals headline the Bravo stage with maximum force and impact. Festival headliners LCD Soundsystem complete the holy trinity of indie disco with a career-spanning greatest hits set, marking their first Dutch show since James Murphy and co. made a grandiose comeback. If you haven’t yet made any plans for the Sunday evening, then one extremely valid recommendation would be to check out the aforementioned acts and Dance Yrself Clean (punintended).

Lowlands takes place from 19-21 August at Evenemententerrein Walibi World in Biddinghuizen, Holland. There are still some 5,000 tickets left, and you can grab one here. Check out our playlist filled with Lowlands recommendations below.