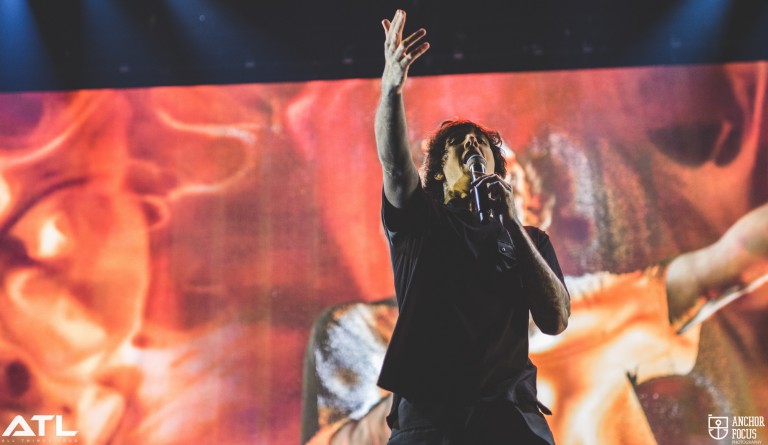 The Busiest Week of 2016: A Guide to Surviving the Week From Hell

This coming week will see Dutch ground left absolutely pulverized by an array of spectacular live shows, all of which seem to have been squashed within the confines of seven mental days. Every step you’ll take this week will find you within the vicinity of a visceral live show, and there doesn’t seem to be much in the way of baying fans who seem prepared to leave not one stone unturned in their pursuit of fantastic live music. We’ve got a busy week on our plates, and so we figured it was a good time to present everybody with a guide to surviving the aptly dubbed Week From Hell. Not sure what to do yet? Then use this guide to help you plan your movements, and thank us later.

12 NOVEMBER: Boston Manor, Can’t Swim et al @ Winston Kingdom, Amsterdam
Make sure to start off your week with a hefty dosis of in-your-face pop-punk courtesy of British outfit Boston Manor, whose knack for a solid melody and ripping chorus knows absolutely no bounds. Can’t Swim will be joining the band on what is their first ever European tour, and with a live package like this one you’re guaranteed nothing short of heartfelt emotion, melancholic riffs and catchy choruses.

13 NOVEMBER: The Cure @ Ziggo Dome, Amsterdam
Robert Smith and co. have shied away from the public eye for quite some time, with their sold-out Ziggo Dome show the first on Dutch soil since 2012’s headline set at Pinkpop Festival. They may not have released a record since 2008’s 4:13 Dream, but don’t let that stop the band from pulling a frantic 3 hour set out of the bag. Make sure to catch Scottish trio The Twilight Sad too, while you’re at it.

13 NOVEMBER: Whitney @ Paradiso Noord, Amsterdam
If hard rock and hardcore metal aren’t your thing, then Whitney is the best place to be spending your Sunday evening in Amsterdam. Taking to the 500-capacity Paradiso Noord in Amsterdam, the Chicago outfit (plus special guest Julia Jacklin) intend to provide twinklingly beautiful entertainment for the senses as they perform tracks from hugely popular debut album Light Upon the Lake. It won’t be long before the band become absolutely massive, so catch this show before it’s too late.

14 NOVEMBER: Panic! at the Disco @ Heineken Music Hall, Amsterdam
Having taken their music down a poppier and more accessible mainstream path, Panic! at the Disco‘s grandiose live show will hit the Heineken Music Hall on Monday together with special guests Tigertown. Don’t miss out on this show if you want to catch Brendon Urie strut his stuff onstage in accompaniment of new album Death of a Bachelor, out now.

14 NOVEMBER: The Growlers @ Paradiso Noord, Amsterdam
For fans of funk-infused psychedelic garage rock, you really can’t go wrong with a good dose of Beach Goth outfit The Growlers. New album City Club was produced by The Strokes’ Julian Casablancas, its contents littered with elements of krautrock, disco, indie rock and funk. It’s a world away from the band’s jangly Beach Goth, yet it’s also logical step in the right direction. Don’t expect to stand still for one minute when the band rock a sold out Paradiso Noord on Monday.

15 NOVEMBER: Twenty One Pilots @ Heineken Music Hall, Amsterdam
Wherever you look, you’ll be unable to avoid the sharp rise of American pop duo twenty one pilots. Co-helmed by Josh Dun and Tyler Joseph, the two-piece blend elements of indie, rap, hip hop and pop to form one appealing end product. Acoustic troubadour Bry is joining the band along for the ride, and so are some 5,000 fans, all of whom ensured that the show sold out within one hour after going onsale earlier this year. The next logical step for Dun & Joseph is the neighbouring Ziggo Dome, so make sure you catch the band in a considerably ‘intimate’ setting before it’s too late.

15 NOVEMBER: Volbeat @ Ziggo Dome, Amsterdam
Who would’ve guessed that there was some still space for a good old bit of rock ‘n roll? On Tuesday, Danish band Volbeat will entertain Amsterdam’s 17,000-capacity Ziggo Dome with an unashamedly brash and anthemic rock show. New album Seal the Deal & Let’s Boogie is an exercise in groove-laden rock ‘n roll, and it’s one which Volbeat are experts in. Join the band, together with support acts Airbourne and Crobot, for an unforgettable ride this week Tuesday.

16 NOVEMBER: Bastille @ Ziggo Dome, Amsterdam
Bastille are currently one of the bigges bands on the planet, whether you like it or not. The indie pop group have a knack for a (repetitively) catchy chorus and infectious melody, both of which they effortlessly manage to intertwine and fuse for a memorable end product. Together with special guests Rationale, the Dan Smith-fronted band will likely give 17,000 fans an evening to remember. Don’t miss out.

17 NOVEMBER: Pierce the Veil @ Melkweg, Amsterdam
Fans of the alternative music scene are seriously spoilt for choice this week, with Pierce the Veil‘s huge sold-out show at the Melkweg just the latest in a whole string of massive shows. Together with special guests letlive. and Creeper, the band plan to present 1,500 fans with new album Misadventures’ eclectic mix of melodic hardcore and pop-punk, the latter of which is a new and very much welcomed addition to the band’s repertoire. Expect a night which features just as many hands in the air as it does pits and crowdsurfers.

18 NOVEMBER: The Devil Wears Prada, Memphis May Fire & Silverstein @ Melkweg, Amsterdam
Every now and then, a touring package comes along that blows every other tour right out of the water. Right now, it looks like Rise Records may have snagged the crown for Most Explosive Tour Package of 2016, with the aptly titled Rise Up Tour boasting co-headline sets from The Devil Wears Prada, Memphis May Fire and Silverstein. Labelmates Like Moths to Flames will also feature, ensuring that the place to be on a chilly November evening is Amsterdam’s famous Melkweg.

19 NOVEMBER: Bullet For my Valentine & Killswitch Engage @ 013, Tilburg
What better way to celebrate the end of a manic week than with a celebration of metalcore’s largest and finest bands? Bullet For my Valentine and Killswitch Engage will be taking over Tilburg’s 013 for a huge show next weekend as part of their co-headline tour with special guests Cane Hill. It might be a bit further away for most fans (something which is made harder by Tilburg’s mediocore public transportation network), but if you’re going to spend money on a good night out next weekend, then make sure you do it at the 013.

If you’re still alive by the end of this week then you definitely deserve a medal. Hopefully this guide will somewhat help you to plan your movements over the next week, because there have never been seven days as busy as this in the recent history of Dutch live music. Sure, there are live shows every day, but never from an obscenely high amount (29) of alternative bands like those aforementioned.

Sleep isn’t necessary, but enjoyment is. Have a good week.

All Things Loud will be bringing you coverage of the above live shows. Check back every day this week for full (photographic) coverage of each show. Find a playlist featuring one song per mentioned band below.