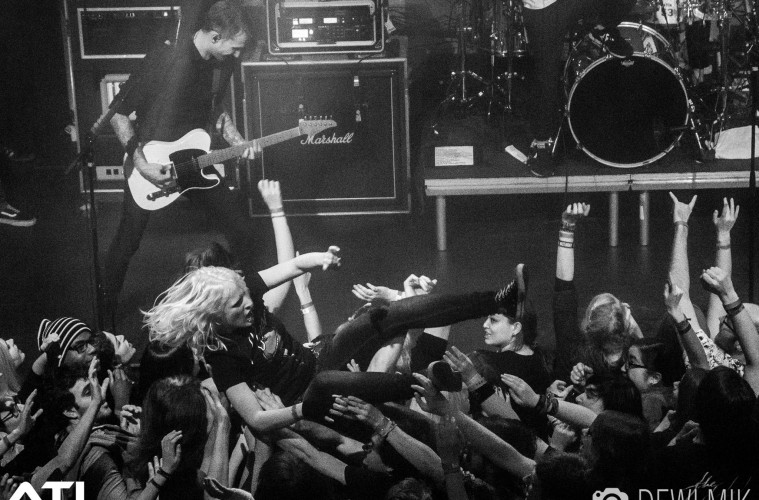 The Full Story of The Used in Eindhoven

Over the last couple of days, punk outfit The Used have played two shows at Eindhoven’s popular Dynamo in order to play their first two studio albums integrally. The first, a self-titled effort, was played on Friday, with its follow-up In Love & Death being given  run-out last night.

NIGHT ONE
Playing debut album The Used in full (with less satisfying support from The New Regime), the Bert McCracken-fronted band decided to spend a majority of the set pulling fans up onstage during each song. Opening the show on Maybe Memories, the quartet subsequently powered through fan favourite The Taste of Ink, mid-set stunner Blue & Yellow and emphatic main set closer Pieces Mended. The majority of the show followed a fast-paced formula, with only one song making for some breathing space. At one point in the show, the crowd sang Happy Birthday in order to celebrate the 15th anniversary of The Used’s classic debut record, with frontman McCracken delcaring the Dutch celebratory word ‘hieperdepiep’ as his new favourite expression. The vocalist is an absolute bundle of energy onstage, with his enthusiasm clearly reflected in the boundless energy expressed by the 500-strong crowd. Click here for our full photo report from Friday’s show.

NIGHT TWO
During the second night, the band performed popular record In Love & Death integrally (this is something which they’re doing in every city on the tour). Opening the set on Take It Away, it quickly became clear that the band meant even more business than on the opening night. This time round, fans were picked in advance to watch from the stage in order to create less fuss and hassle, with the set highlight coming early in the form of I Caught Fire. Frontman McCracken spent a lot of the set commanding the crowd into carrying out certain actions, with the starting of a moshpit the most common example. The crowd responded gleefully, with a large chunk of the room making space for hefty pits and swathes of crowdsurfers. After performing the whole record from top to bottom, Lies for the Liars cut Pretty Handsome Awkward ended the whole evening in frenetic fashion. The show felt like a celebration for the band, even more so than the night before. Check out more pictures from Saturday’s show below.