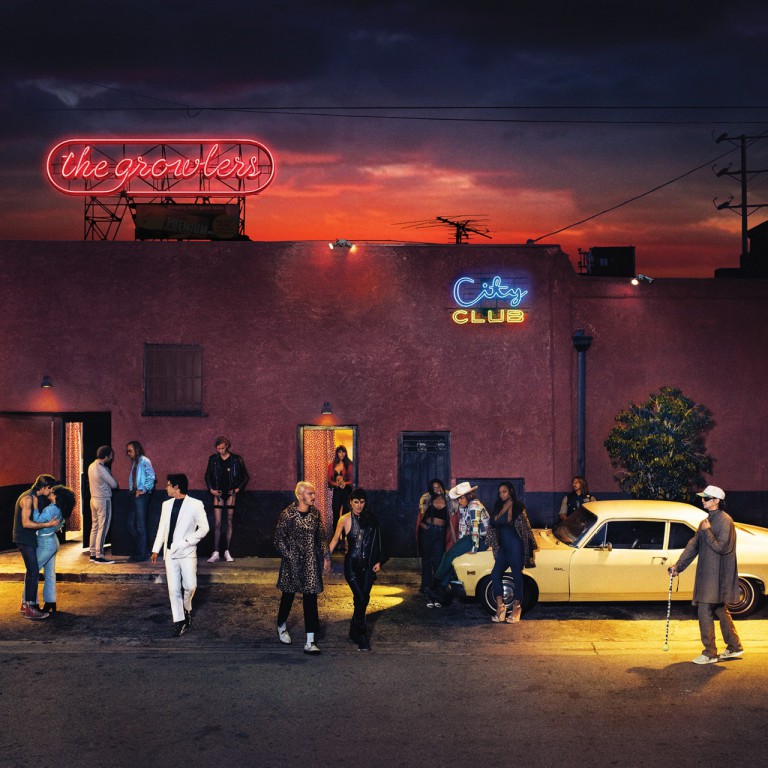 There isn’t much that stands in the way of success for Growlers’ frontman Brooks Nielsen. In an interview with All Things Loud last year, the jaded frontman talked of his desire to be one of the biggest bands in the world no matter what it took. “I want to see us headline festivals” he said, at the time wryly staring into the distance like a man who could see exactly what he wanted. A few years ago, you’d have laughed at Nielsen (a former water fountain builder) for stating that The Growlers could “become better with age” or headline festivals “with Paul McCartney”. Now, though, his claims make plenty of sense. Tomorrow, Nielsen and his band will release the Julian Casablancas-produced City Club, a record which once and for all puts their much-famed Beach Goth jangly-ness to rest in favour of pummelling synths, groove-laden percussion and, as per usual, Brooks’ fine-tuned vocals. It’s not what you’d expect from The Growlers, but it definitely sounds like an album which is targeted at the mass market to an extent which falls right in line with Nielsen’s ambitions.

Not that everyone expected this sonic transformation, though. 2014’s Chinese Fountain was the perfect bridge between Beach Goth and synth rock, being the record which firmly thrusted the band into public consciousness. Once the cycle for that record ended, the band essentially had two choices: 1) go all out and evolve, or 2) go back to their roots and never change. Having opted for the first option, City Club is a record which captivates the listener from start to finish. The opening title track is awash with funky rhythms and a caterwauling chorus, both of which intertwine so well that The Growlers already sound like an extremely well-oiled machine before they’ve even gotten up-and-running. Following track I’ll Be Around is of similar proportions, combining afrofunk elements and a catchy refrain to a memorable extent. Although you can definitely hear subtle elements of Beach Goth in the undergrowth by means of jangly guitars, the influence that Strokes frontman Julian Casablancas had in his role as producer definitely shows. The grisly Vacant Lots is one predominant example, utilizing dark synths and an eerie melody to provide the listener with a vibe that sits perfectly alongside the record’s album artwork. The album cover depicts the band and other ‘characters’ outside the City Club, which is an actual location the band frequented during time off. It screams the 80s, neon lights and late nights to such an extent that the artwork is a perfect accompaniment for each track’s diverse elements. The twinkling Night Ride lends itself to night riding, something which is particularly onset by the band’s rhythm section, which now lacks former drummer Scott Montoya and bassist Anthony Braun Perry, the latter of whom is now on a break.

Casablancas’ influence tends to come and go throughout the record, even though Nielsen previously stated that most songs were written before his arrival in the producer’s seat. The upbeat and funky Dope on a Rope and anthemic Rubber & Bone are both bathed in Strokes-y elements, from intertwining guitar lines to forceful percussive patterns. They sound the furthest from The Growlers’ trademark sound that you could ever get, but it doesn’t even seem like too much of a bad thing (something which fans had expected upon discovering their new sound). The balladry in When You Were Made makes for one of the record’s best moments, something largely down to Nielsen’s serene vocals and storytelling lyrics (“her subtle breast gently sagged as her grew jaded”). However much the band change musically, Nielsen’s beautiful voice and witty lyrics (co-written with guitarist Matt Taylor) will always remain the same and are two factors which contribute to the band’s unique sound. Having opted for a rawer vocal tone on City Club, When You Were Made sounds like something straight out of a 1970s musical vault. The Motown-tinged The Daisy Chain is yet another step in a different direction, preceding the only track on the record which bears significant resemblance to the band’s past – World Unglued. Jangly guitars and simple yet effective percussion (something which was Montoya’s forte) intertwine nicely alongside a pulsating bassline and Nielsen’s uplifting chorus vocals. It’s not exactly Beach Goth, but it comes close.

Neverending Line follows a garage-y path which is centred on a bass melody, one which is quickly overwritten by a fuzzy guitar and Nielsen’s scrawny vocals. The chorus is one of epic proportions, almost following a similar musical path to 2014’s Good Advice, which was the band’s most recent foray into garage rock. The Julian Casablancas-featuring Too Many Times is one of the best tracks on the record, largely ditching the synths (save for a melody) and sticking to rockier elements which yet again are akin to The Strokes. That their frontman sings a verse on Too Many Times shouldn’t be too much of a surprise, then. The chorus is catchy, just like you’d come to expect from Nielsen and co. It makes way for the slow-burning Blood of a Mutt which, at over five minutes, is the longest track on the record. “I wouldn’t name her a burden or a common mistake” sings Nielsen on the track’s opening line, his voice accompanied by a 3/4 drum pattern and subtle guitars. As the track progresses, Taylor and Stratka’s six-string interplay becomes more prominent, climaxing in a solo of epic proportions. City Club comes to a close on the uplifting Speed Living, which utilizes brass and a catchy chorus. It’s not the most memorable album finale ever, but it certainly does the track in rounding off City Club as upbeat and enjoyable as possible.

Sure, City Club doesn’t sound like the band that people learnt to love; rather, it takes the their most eccentric qualities and helps transform them into a band who will one day hit stratospheric heights. The abrupt departure of Montoya and subsequent disappearance of Braun Perry may have both come at unwilling times, but with a band as dynamic as The Growlers (who are now signed to Cult Records) there’s no way in predicting what will happen next. Picking Casablancas to produce the record is a risky choice which has ultimately paid off, but it won’t come without doubts from diehard fans and confusion from critics who will ultimately realize that City Club is the only real direction this band could have headed in. “I wouldn’t have it any other way”, as Nielsen himself sings towards the end of Speed Living. Brooks is a man who knows what he wants, and that’s something which City Club demonstrates through and through.