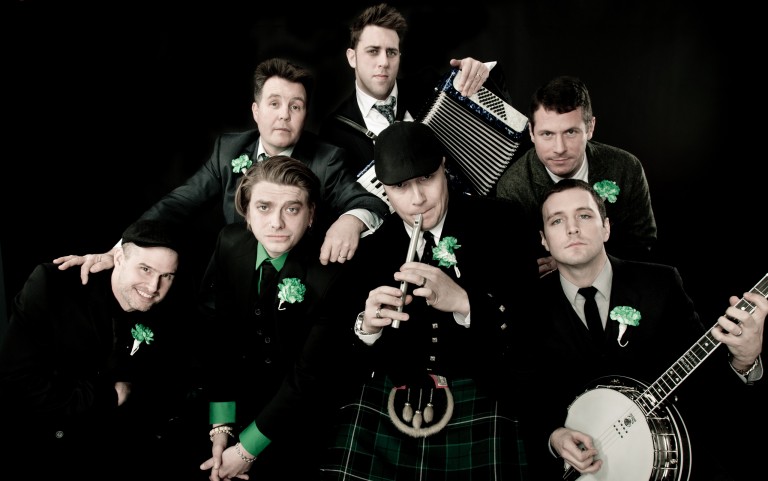 Boston’s Dropkick Murphy’s are seen as one of the frontrunners of punk rock and classical Irish styles, effortlessly mixing punk with traditional Irish instruments to create a winning combination, loved by fans the world over. All Things Loud managed to speak to drummer Matt Kelly, read on to see what he had to say.

Hmm, how do I answer that?  Well, most of the guys in the band are of Irish descent and have been steeped in Irish music (among other stuff like rock and roll) since before we could walk. You couldn’t get away from it. When I was about ten years old in parochial school, my friend Brian and I had a saying when something was lame, stupid, or whatever:  “That’s right up there with Irish Music!” When I was a kid, and I think this went for the other guys, Irish music wasn’t considered cool or “punk rock”. It was the diddly-dee crap that our grandparents listened to. Then the Pogues happened, and it got very cool very fast. Other than that, I think it’s how we write songs. Storytelling, and the mix between sad subjects and happy music, I guess.

What made you start a band that sets out to be hard and heavy, whilst still encompassing less “traditional” instruments and elements?

Make music you want to hear. That’s pretty much it. We love the Chieftains, the Dubliners, the Furey Brothers, the Clancy Brothers, etc., but we also love AC/DC, the Who, the Sex Pistols, Clash, Stiff Little Fingers, Slapshot, and Cock Sparrer, too.

You’ve only just started your summer tour.  Are there any shows coming up that you’re particularly looking forward to playing?

It looks like most of the festivals we’re playing are pretty stacked as far as lineup goes, but I personally am looking forward to Copenhagen with the Guv’nors and Bråvalla Festival so I can see Iron Maiden.

And are there any shows which, for you as a band, really stand out?

We played in Sydney, Australia with Rose Tattoo in, I believe, 2002. It was before founding member Pete Wells passed away. That show was amazing!

Have you got any pre-show rituals you participate in?

Imagine seven guys standing in a circle around a cookie…no! I’m joking.  We all have our little warm-ups and that, but then we go over the setlist for the night for changes, segues, etc., and make sure we’re all fired up to play.

And what can we find on your tour rider?

Lately, live music has been growing on a large scale. What do you think it is about live music, and your live show in particular, which makes live music such a worthwhile experience? And is the live side of things vital for you as a band?

In the day and age of downloading, piracy, and all that, the artists that used to sell millions of albums and make millions of dollars off them now have to tour to make money. That, and the fact that so many idiots need to video the band on their mobile phones instead of participating in the show, so they can put it on Facebook or whatever. This sells lots of tickets.

On a serious note, we’ve always said that the live setting is how to truly experience the Dropkick Murphys. It’s very interactive and we absorb the energy from the crowd as much as the crowd feeds off the energy coming from the band. Music is meant to be heard live. You can get a lot of feeling from listening to a record or CD (don’t get me started on the garbage sound of MP3’s), but the camaraderie, power and healing sounds of being a part of a gig can’t be replicated or seen on YouTube.

As a band, you obviously see a lot of the world on tour. Are there any cities which, when you visit them, you absolutely love to spend time in?

Man, there are so many great cities to play in or relax on a day off in. In the early days we didn’t really get to see much of anywhere except the inside of the club and the inside of the van, except on days off. Since then we’ve been touring in buses so it definitely frees up time and we don’t spend half the time playing catch-up for sleep.

Cities like Berlin, Lübeck, München, London, Manchester, Dublin, Nice, Sydney, Melbourne, Brussels, Ljubljana, Tokyo, Osaka are all amazing and there are many more, the list goes on. Give me a good town rich in history, record shops, beer shops, cool bars, sightseeing, etc., and I’m a happy camper.

Have you got any plans to make a new record when this tour has finished? Or are you planning on taking a break?

We plan on doing some writing songs for a new album on this upcoming tour, and we’re touring most of the rest of the year, taking time off for Thanksgiving, Christmas, and such.

And finally, Magners or Guinness?

I wouldn’t pick either one, but if those two were the only choices I’d go for Guinness. I don’t dig on cider. Now if there was some poitín in the house, I’d take a short one of those!

Dropkick Murphy’s are touring throughout Europe this summer, taking in the likes of Rock Werchter, Bravalla Festival and Jera on Air, the latter of which All Things Loud will be bringing you coverage of.