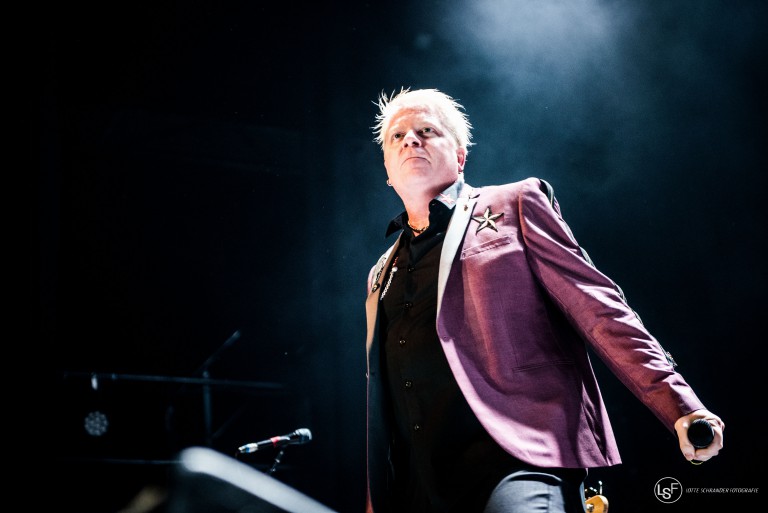 The Offspring in Tilburg: Still as Youthful as Ever

Is punk rock dead? You’d be inclined to assume so, especially considering the state and direction which some genres (hi, pop punk) seem to be going in. However, there are still a good few bands who are flying the flag for old-school punk rock. One of these is The Offspring, who are currently touring Europe in support of their constantly growing greatest hits back catalogue. Joining them were local support Harsh Realms and California’s Good Riddance.

Following a solid set from Brabant’s very own Harsh Realms, Good Riddance took to the stage in front of what seemed a nearly full 013. The politically-charged Californian natives performed 18 songs across thirty minutes, opening on the manic Letters Home and taking their set through the whole of the band’s extended history (which stretches back all the way to 1986). Having originally split up in 2007, the Russ Rankin-fronted quartet have been touring again since their reunion four years ago, which featured the release of last year’s Peace in Our Time. A handful of tracks from the record, including the intense Disputatio, featured as Good Riddance warmed the 013 up perfectly for The Offspring. Rankin’s repeated conversations with the crowd were often backed up by bassist Chuck Platt’s witty sarcasm, something which saw him berate the “people at the back” and order a selection of moshpits. Good Riddance aren’t the biggest name in the punk world anymore, but their legacy has been built to last and last night proved that.

The Offspring followed thirty minutes later, taking to the stage in front of a 3,000-capacity sold-out crowd. 80% of the crowd consisted of old men reliving their youth, with the rest of that quota completed by new, young fans and children. It’s very hard to spot a fan of The Offspring on the street, however at a live show it couldn’t be easier: checked shirts, glasses and that look you have when you’ve been longing for thirty years to relive your nostalgic teenage years. And boy, The Offspring sure know how to put on a nostalgic party. Opening the 80-minute show on hit track You’re Gonna Go Far, Kid, it instantly became clear that the show would be nothing more than a perfectly rehearsed lesson in nostalgia. The double-whammy of Want You Bad and Come Out to Play added some playful elements to the band’s radio-friendly punk, with a handful of their biggest hits also appearing throughout the set.

Lead vocalist Dexter Holland and rhythm guitarist Noodles appeared extremely energetic throughout the set, forming a formidable duo when it came to crowd interaction. At one point, Noodles jumped up onto his riser and lapped up applause from the crowd, before engaging in a jokey conversation about Holland’s name. “He wanted to call himself Mr. Netherlands, but it sounded too posh, so here’s Mr. Holland!” declared Noodles, before Holland told him to shut up and compliment the crowd. The room went silent, with the sunglasses-clad guitarist shouting “You motherfuckers are sexy, yeah!” at the top of his lungs. The band’s onstage behaviour and charisma seems to have never changed since their 80s heyday, with the young punk attitude still ever-present. If you didn’t know how old the band were, then you would’ve guessed much younger based on their behaviour. Fan favourite Why Don’t You Get a Job? received a huge reaction from the crowd, much like main set closer The Kids Aren’t Alright and preceding banger Pretty Fly (For a White Guy). All three tracks form the backbone of what The Offspring are all about: fun punk rock. Witty lyrics, catchy riffs and pounding percussion seem to be three elements which have forever stuck with the band (who are completed by bassist Greg K, drummer Pete Parada and touring guitarist Todd Morse). By the time Self Esteem brought the whole evening to an end, not a single soul in the room remained stagnant; everyone went wild, exactly as they should have.

You could argue that The Offspring’s songs all sound the same, however when you put their tracks in the context of the whole genre then you’ll realize that this applies to almost every band. And should it really matter that, four years after their last album, the band are still riding on past successes the world over? No. The Offspring are here to have fun, and they (still) don’t care what anyone thinks of them. Punk rock isn’t dead, that’s for sure.