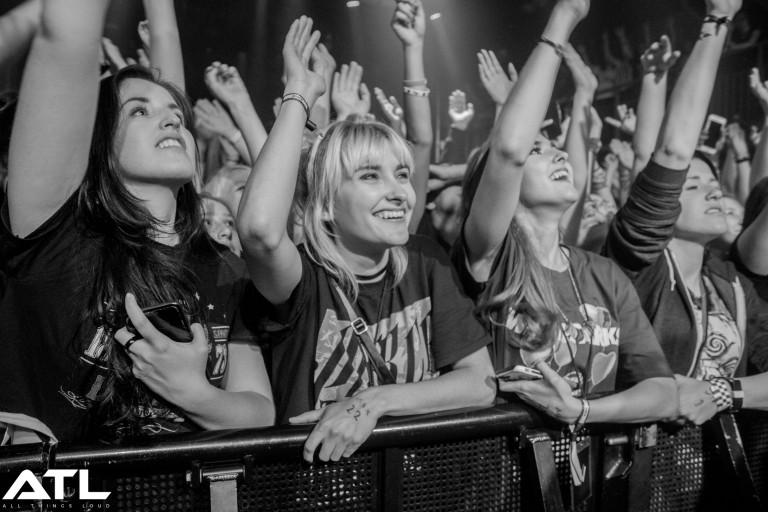 The Powerfest: Redefining What it Means to be Emo

What does it mean to be a fan of ‘emo’ music in 2017? And is ‘emo’ even a thing anymore? Back in the late 2000s, the genre skyrocketed into the upper echelons of public consciousness thanks to genre upper-gods Fall Out Boy and Panic! at the Disco. Both aforementioned may still operate under the same name, but their musical output is far removed from what we once described as sweaty, in-your-face pop-punk. Nowadays, that title is reserved for a new wave of bands, all of whom seem to be having a good go at further blurring the genre boundaries which have forever separated alternative music from the rest of the world. Last night, a selection of said bands took on Amsterdam’s Melkweg for The Powerfest’s grand return. For those unaware, The Powerfest is a one-day festival which doubles up as every alternative music fan’s wet dream. This year is no different, with no less than six of the hottest bands appearing across the Melkweg’s two sold-out rooms: Pierce the Veil ands Sleeping With Sirens top the bill, with Crown the Empire, ISSUES, State Champs and ROAM also appearing. The latter of these six, ROAM, opened the whole evening with a blistering set in the OZ, sparking off meagre pits with their hardcore-meets-pop-punk bangers. Debut album Backbone came out towards the start of 2016, however it seems to still be going strong judging by the crowd’s seemingly boundless energy. Frontman Alex Costello reaped these rewards, with the band putting their all into a set which ended just too short to satisfy fully. Tyler Carter and his buddies in ISSUES followed swiftly over on the MAX Stage. Carter and co.’s hotly anticipated sophomore record Headspace saw light of day last year, incorporating slick nu-metal with a modern hardcore twist. Throw in Carter’s smooth vocals and you’ve got a combination which, on paper at least, sounds great. Live, though, the band fell just short of the mark, failing to completely impress a crowd whose enthusiasm dwindled beyond the first five rows. Kicking off their European tour with a set which included fan favourite Mad at Myself, ISSUES seemed to still be finding their feet in front of a decently filled MAX. They’ll be back next week with Good Charlotte in Utrecht, so here’s hoping that the band will have picked up on their stage show. Over in the OZ, Crown the Empire also kicked off their European tour with a swaggering set which drew heavily from last summer’s alt-rock banger Retrograde, an album which (despite the departure of co-vocalist David Escamilla) has seen the band’s music transform from rowdy concept-loving hardcore kids to radio-ready alt rock with a dark edge. Set highlight Weight of the World reinforced this, with the whole room on their feet and ready to receive frontman Andy Leo’s lyrical missives. With the night halfway done, it’s already proving to be a successful return for a festival set to reap the benefits of a success alternative scene anno 2017. One of the scene’s most popular bands at the moment is the Vic Fuentes-fronted Pierce the Veil, who only sold out the Melkweg MAX last November with little difficulty. Tonight’s a different story, as the quartet are playing second fiddle to close friends Sleeping With Sirens. Fuentes and co., who don’t actually need much introduction, opened the first night of their European tour with a blistering rendition of Texas is Forever, the cataclysmic highlight of last year’s Misadventures. Their 45-minute set was a short and sharp run-through of the band’s diverse back catalogue, with set highlight King For a Day seeing Sleeping With Sirens frontman Kellin Quinn join in and pull off his part. It was a very by-numbers set for the band, however that doesn’t take away from the fact that Fuentes and co. are an incendiary live act. Pop-punk heavyweights State Champs topped the bill over in the OZ, having enjoyed a huge surge in popularity which only saw them sell out the OZ earlier this year to much cheer. Breakthrough album Around the World & Back has just received the deluxe reissue treatment, giving Derek DiScanio and co. the chance to go on a European victory lap which left no stone unturned once they left the Dutch stage. Hit track Secrets was the climax in a set which actually started and ended as strong as the band have always been, which shouldn’t come as much surprise considering the large amount of positive press surrounding the band. Whereas State Champs are still on the up, last night’s headliners, Sleeping With Sirens, now find themselves at a vital crossroads which could determine for how much longer the band get to enjoy their successes. Kellin Quinn and co.’s most recent studio album Madness (which they released in 2015) is a step away from their old-school post-hardcore musings, rather opting for a more streamlined and poppy approach. There’s nothing wrong with that, but it just isn’t as good as the band most fans grew up listening to. Live, though, Quinn and his bandmates fully make up for it with a live show that pushes their own boundaries and gets them thinking outside of the metaphorical box. Quinn is, as per usual, absolutely electric in his vocal delivery and his bandmates never shy away from a bit of onstage activity. Early highlight Kick Me infused some much needed hardcore vibes into the set, before Matty Mullins collaboration Congratulations added some metal vibe. However, these were too few and too far in between for a crowd who came for power, and not emotion. That’s not to say that Sleeping With Sirens pulled their own fans to The Powerfest, though; of course they did, it just didn’t fit in entirely with the vibe of the rest of the festival. Once again, though: that is not a bad thing. The Powerfest is nothing like it used to be, i.e. a safe haven for everyone into brutally heavy music. Instead, it’s become a stronghold for all those into the alternative, all of whom welcome fans of other bands whether they like the music or not. That’s why last night’s gig was ultimately the success it was made out to be, so here’s hoping that it returns in 2018 to once again prove and hammer home the relevance of emo music in 2018. The Powerfest looks set to return next summer. All Things Loud will be bringing you full coverage of various different summer festivals this year, and you can follow the whole thing here!