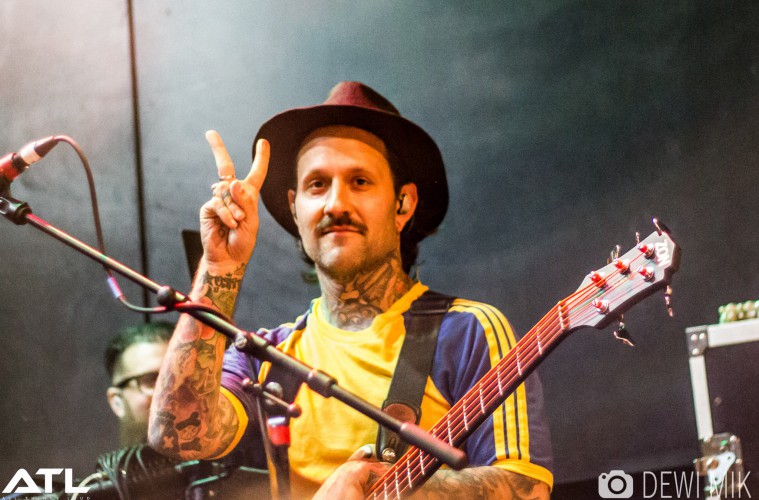 Today, The Used will put out their long-awaited new live album Live and Acoustic At The Palace. While the band were touring through Europe last month, we briefly asked bassist Jeph Howard a few questions. Check out what he had to say below.

You’re currently touring the world in support of your anniversary celebrations. Anniversaries are obviously worth celebrating, but why did you decide to play 2 shows in each city and play 2 full records?
Because we like to party and two parties are better than one.

Do you see yourself doing this again in the future for other records?
Haha, we have talked about it but it would be a long time from now if that ever happened. I would love to play all of our records from start to finish.

You invited a lot of fans onstage during the shows. Why?
Because our fans are family and sometimes families need to hug.

A lot of these fans came from across the whole world, which is something Bert often referenced. Do you ever keep in touch with your diehard fans and invite them to shows in different countries?
We have a couple long time fans who have become extremely close with us and tours wouldn’t feel right unless we saw them. One friend has seen us in at least 10 different countries.

And how is your relationship with your fans in general?
Great! I try and meet as many as I can, some of them I have chatted with after shows for at least 10 years or longer.

Bert lives in Australia, whereas the rest of the band don’t. How do you come about rehearsing and working on music together? And is it hard to keep up with each other at times?
Na, it’s easy. We all practice alone at home to keep tight then just meet up at a spot before tour to practice. The Internet makes it  all very easy to keep in touch.

Seeing as you’re spending two nights in each city, you’ve got plenty of free time. What do you get up to between shows?
Lots of time for searching for yummy vegan restaurants. I also love exploring, so I usually end up wondering all over a city. We all have little routines that we undertake in order to not go crazy or get homesick.

You last released Imaginary Enemy in 2014. Is there a studio album in the works?
Yes, we have written musically about 20-25 ideas and we are planning on writing 20 more in the next year. We are thinking about recording in january/February on next year. It’s all still in the beginning stages.

Live & Acoustic at the Palace is out now.