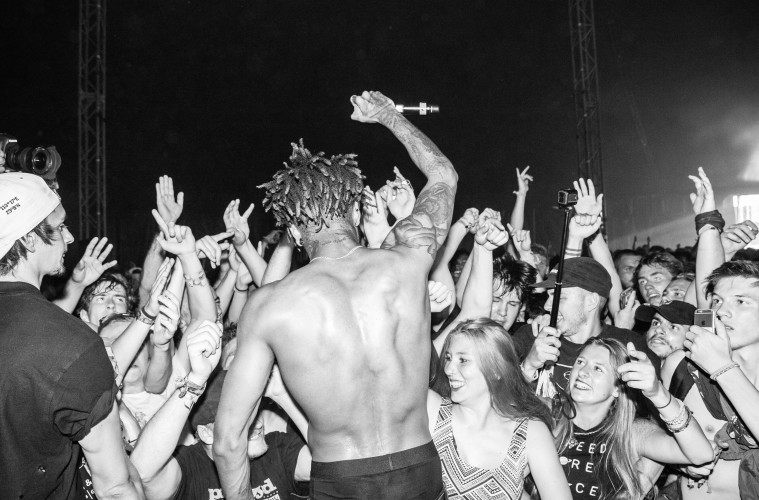 Last month we introduced you to All Things Loud’s Weekly Pick, a brand new column which highlights the best album releases of the last week. Today (15 March), Jack Parker and Sébastien Gamez introduce you to another set of hot new records as part of Weekly Pick’s second instalment. Featured among today’s recommendations are fresh full-lengths from the likes of The Brian Jonestown Massacre, Karen O & Danger Mouse, Fallujah and Scarlxrd.

Legendary San Fran psych rockers The Brian Jonestown Massacre have prolifically released their signature psychedelic, ethereal and spacy music ever since the emergence of magnum opus Methodrone in 1995. With well over 20 releases to their name, ranging from live albums, studio albums as well as soundtrack projects, it’s safe to say TBJM are a well established group on the psych rock spectrum. This new, self-titled album is their latest take on a signature sound which will definitely sit well with fans. Tracks such as My Mind is Filled With Stuff, We Never Had A Chance and closer What Can I Say most definitely present a moodier vibe, yet remain within the sonic landscapes this band is familiar with. SG
For fans of: Spiritualized, Moon Duo, Dead Meadow
Key song: My Mind is Filled With Stuff

On paper, Yeah Yeah Yeahs frontwoman Karen O and superstar producer Danger Mouse (Gorillaz, U2, Red Hot Chili Peppers) sound like an absolute dream team. Their combined decades of experience in producing and creating era-defining music of the highest quality has gifted them praise from critics the world over, and rightly so. In Karen we have a fierce vocalist and lyricist with sharp tongued wit and an instantly recognisable voice, and in Danger Mouse we have a man who can quite literally do it all. Lux Prima serves as their first joint record, and it’s a perfectly lush melting pot of ideas which avoids self-indulgence by getting straight to the point over the course of nine captivating tracks. From the restrained bombast of the title track to the sultry swagger of Leopard’s Tongue, Lux Prima is as much a success on record as Karen O and Danger Mouse are on paper. JP
For fans of: Yeah Yeah Yeahs, Beirut, film music
Key song: Leopard’s Tongue

Fallujah – melodic death metal from California – know how to write intricate yet heavy music. With this latest release, the band have switched stuff up a little by introducing a new lead vocalist. Antonio Palermo takes the reigns as the band make a massive leap forward from prior release Dreamless (2016). Tracks such as Glass House, Ultraviolet and Departure are emotionally charged, razor-sharp and incredibly raw. This makes Undying Light a must-listen for fans of the sub-genre and, honestly, metal in general. SG
For fans of: Obscura, Rings of Saturn, Archspire
Key song: Hollow

The Comet is Coming are not the kind of band whose music you could listen to casually; on the contrary, their sonic experimentalism is so intricate and unique that it’ll take a fair few listens to really absorb the multitude of layers which their obscure psych jazz is comprised of. New album Trust in the Lifeforce of the Deep Mystery does exactly what it says on the tin, containing nine sprawling tracks which border on wavy jazz and mystical psychedelia. Arabic influences are scattered throughout, as are hints of trip-hop-esque percussion, and both add a sense of worldly atmosphere to proceedings. Album highlight Summon the Fire builds up over time before almost swallowing itself whole, with collaborator Kate Tempest providing a fresh approach on Blood of the Past. As sophomore records go, The Comet is Coming have definitely nailed it with TITLOTDM. JP
For fans of: Sons of Kemet, Massive Attack, luscious soundscapes
Key song: Summon the Fire

SEAHAWKS – EYE OF THE MOON

Cornwall may be a place located right on the edge of England, yet incredible music seems to constantly seep through from there into the musical stratosphere. Seahawks are a duo who, even though relatively underground, have prolifically sketched out sonic landscapes for years. A hefty dose of ambient music with sweet mystic pop is bound to take you on, and I quote: “a transportive aural journey”. This latest record is no different from their prior work, and is a full experience from start to finish. SG
For fans of: Laurel Halo, Peaking Lights, Arp
Key song: Color Temples

Do you like trap music? And do you revel in the idea of spending your nights as close to a sweaty mosh pit as possible? Then chances are that Scarlxrd has either slipped onto your radar, or so ingrained into your mind that you can recite each and every word of his manic missives. Debut album Infinity is an incendiary wall of sound from the London rapper, taking no prisoners as it crushes everything in its path. And yes, that includes your eardrums and sanity levels. Infinity bridges the gap between the pop sensibilities of sparse, radio-friendly trap and scream-laden core/emo music. It may not make sense on paper, but for some reason it works. Not an album for the faint hearted; but then what do you expect from an album with titles like I WANT TX SEE YXU BLEED and YXU MAKE ME SICK? JP
For fans of: The Prodigy, Bring Me the Horizon, the grimier side of trap