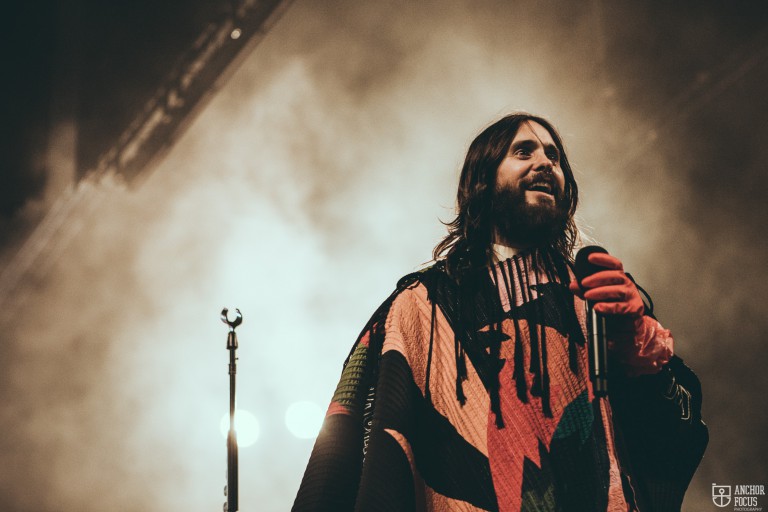 Thirty Seconds to Mars Triumph in the Ziggo Dome, But Has This Become the Jared Leto Show?

By now, it’s safe to assume that we all know who Jared Leto is. The actor, director, humanitarian and – perhaps most predominantly – face of alternative rockers Thirty Seconds to Mars is an ever present entity across our various different creative disciplines. This is something which we’ve all become accustomed to in recent years, simply because there seems to be no limit to his abilities. Although acting has taken up more of a key role in Leto’s life of late (take his career peak Suicide Squad as a good example of this), he still manages to find time for pushing boundaries when it comes to the creative clusterfuck that is Thirty Seconds to Mars. So much so, that you’d be forgiven for assuming that Jared Leto is the band. Sure, their grittier and heavier beginnings outlined them as saviours of rock, but as time passes the focus seems to shift more and more from a three-piece to something which many critics have dubbed The Jared Leto Show. The above isn’t meant to be perceived negatively, but it does beg the question: how much of what we used to love about Thirty Seconds to Mars still exists, and how much of what the band (read: creative entity) do now is fuelled purely by Leto’s egotistical creative offshoots. With a new studio album due in 2018, both questions will more likely than not be answered over the course of the group’s current MONOLITH tour, which is trekking across Europe in all its LED screen-glory. Not that this tour has panned out exactly as fans would have hoped, though, as key member Tomo Milicevic is missing due to undisclosed personal reasons. This leaves Jared Leto (complete with Jesus hair) alongside his brother Shannon, with the duo together taking on a sparsely filled Ziggo Dome in Amsterdam tonight (20 March). Just as was the case last time the group stopped off at the Dutch arena, the upper seating ring finds itself empty. There are even empty seats scattered throughout the lower seating ring, one which looks out over a stage curiously stationed in the middle of the room. It allows the entire arena to experience the Leto brothers up close and personal, visible from all angles so that you’ll never miss a beat. And not a beat was missed, not least thanks to the abundance of backing tracks and intricately placed samples which accompanied Leto and his drumming brother. Set opener Up in the Air set the tone well, incorporating crowd interaction from the word go. This is one of the many things Jared Leto does well, as it allows him to extend his reach and open his arms to a world of fans who grew up closely attached to his band’s music. The Ziggo Dome floor, which is made up of 6,000 enthusiastic fans, is a sweltering mass of bodies for the duration of the ninety minute show, not letting up for anything. The show reaches an early peak thanks to behemoth single Kings & Queens (which is paired up with the pummelling This Is War), which has been extended to encourage as much crowd participation as humanly possible. As becomes prevalent throughout the night, it seems to be the case that showman Leto is extremely reliant on crowd interaction (in his defence – what else did you expect from a Hollywood actor?). Some songs are interrupted and restarted in order to get the crowd going (“Hold on, hold on. Why are you guys still sitting on your seats?” asked Leto at one point), whereas others – such as the militant Search & Destroy and restrained Do Or Die – are drawn out to a point of no return. Whether you like it or not, Leto will go out of his way to put himself on a pedestal in order to satisfy the masses watching (in this case, 12,000 Dutch fans). Some may call it ego-feeding, and to an extent it is, but others may just put it down to his sheer passion for entertaining fans. This continues over the course of some fourteen songs, including the first full performance of The Kill since 2011. The only thing missing here is Leto’s guitar, which he has largely abandoned for tonight’s show in favour of the aforementioned crowd interaction. There isn’t a single moment during the show where Leto doesn’t try to rile up the crowd or push them to the emotional edge (a cover of Rihanna’s Stay takes care of this). He even introduces Kensington frontman Eloi Youssef to the stage for comeback single Walk on Water, which ensures that the crowd absolutely lose their shit (for those unaware: Kensington are huge in their home country). Competition winners (dubbed the 3fm Rock Gods) are introduced to the stage for rocky cut Conquistador, before a suitably powerful Closer to the Edge sees swathes of fans take to the stage to assist Leto in bringing his show to an end. Inviting fans onstage has become a staple in the band’s live show over the years, so it definitely did not come as a surprise to see a selection of hand-picked fans join the prepaid VIP ticket holders for Closer to the Edge’s grandiose, balloon and confetti-laden ending (because who doesn’t love a good bit of confetti?). Notice the deliberate use of his above, because a Thirty Seconds to Mars live experience anno 2018 really does revolve around Jared Leto. Sure, he’s the frontman and it’s something you’d expect from a man whose life revolves around public appearance, but at times you forget that Thirty Seconds to Mars consists of more than just one man. This may be the case in the studio, but live you probably wouldn’t even notice if Shannon Leto was replaced by a backing track. The absence of Tomo Milicevic is due to personal reasons, but even if he were present there’d be no denying that Leto is the star of the show. No amount of backing tracks or accompanying live gimmicks (take the huge stage show as a prime example of this) can take away from the enormous impact Jared Leto has on a room, so much so that it’s almost swallowed up everything which remains of the band. Thirty Seconds to Mars are well and truly able to deliver a powerful and emotional live show, and you have to respect that ability, but deep down it does feel as though the band are no longer what they used to be. The Jared Leto Show, anyone? Jack Parker.