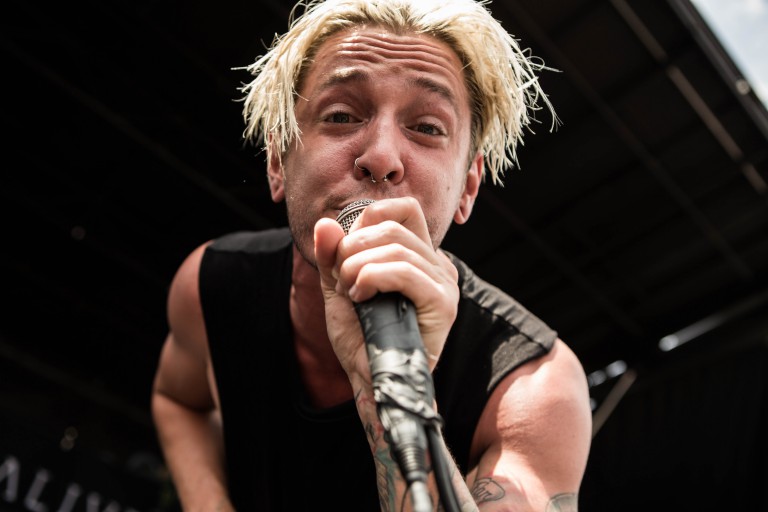 Three New Albums You Need to Listen to This Week, Featuring The Word Alive and Cut Worms

It’s May! Not only does it mean that we can finally expect a good old bit of sunshine in the coming weeks, but it also means that festival season is right around the corner. For this week’s new album feature, we’ve picked out three records by artists who hail from totally different sonic backgrounds, but who will all strut their stuff on tons of stages this summer.

There aren’t many singer-songwriters out there today who can capture as much intensity and emotion in their songs as Damien Jurado does. The Seattle musician is often found throwing his deepest thoughts right out into the open, laying himself and his mind bare for the world to see. On The Horizon Just Laughed – his twelfth album – Jurado returns with eleven serene slow-burners which find themselves amongst some of his best work to date. Album opener Allocate allows him to put his extremely soulful voice out on show alongside lilting guitars and strings, somewhat setting the tone for what’s to come. Album highlights include the upbeat, string-laden Percy Faith (one of six songs named after or directed towards a person), 1973‘s subtle storytelling and the incredibly brooding The Last Great Washington State. The Horizon Just Laughed won’t change the world, but it’ll certainly make it a better place. 7.5/10

“See the blood on the magazine” sings Cut Worms’ Max Clarke on How It Can Be, the opening track on his debut offering Hollow Ground. It’s a bold opening line to kick your career off with, but then that’s exactly what you’ll come to expect from Clarke and his sharp, lyrical wit. Hollow Ground’s ten tracks are a short but sharp exercise in slick indie rock, relying heavily on contemporaries The Growlers and Allah-Las, whilst taking plenty of hints from the simple rock ‘n roll tunes which swarmed the airwaves halfway through the twentieth century. Coward’s Confidence is lathered with brass-laden swagger, sounding like something you’d find on a jukebox in downtown Brooklyn circa 1962, whereas Think I Might Be In Love heads down a country-infused path (preferably a gritty, sandy one near New Orleans). One album in, and Clarke sounds like he’s onto a real winner. The meticulously crafted songs are honest and pure, the lyrical emotion is just right and everything essentially sounds like it was meant to be. Hollow Ground is the best indie debut of the year, and god knows how long we’ve waited to say something like that. 8.5/10

It’s been a tumultuous couple of years for Arizonan trio The Word Alive. Aside from battling a handful of personal and internal struggles, Telle Smith and co.’s world slowly came crashing down when both former drummer Luke Holland and bassist Daniel Shapiro parted ways with the group, essentially forcing them to move on as a three-piece. The main concern on most people’s minds at the time was if a three-piece could make great metalcore music? If new album Violent Noise – their fifth – is anything to go by, then that answer is a resounding yes. From the moment album opener Red Clouds kicks in to the moment Lonely fades out (and via two collaborations, one of which is with Danny Worsnop), Violent Noise serves as a powerful mission statement for a band who had more than just a point to prove. They had a career to re-salvage, a ship to save from the wreckage. The most intriguing moments on the album are the ones which force Smith and co. to step outside of their comfort zone, such as on the Sincerely Collins collaboration Human, I Don’t Mind‘s radio rock melodies and the stadium-ready Run Away (Kings of Leon, anyone?). All three tracks stand out on an album which further shows us that Telle Smith and co. have overcome trouble and strife to resurrect a band many thought were on the decline. Oh, how they were wrong. 8/10

All three albums come out tomorrow (4 May).