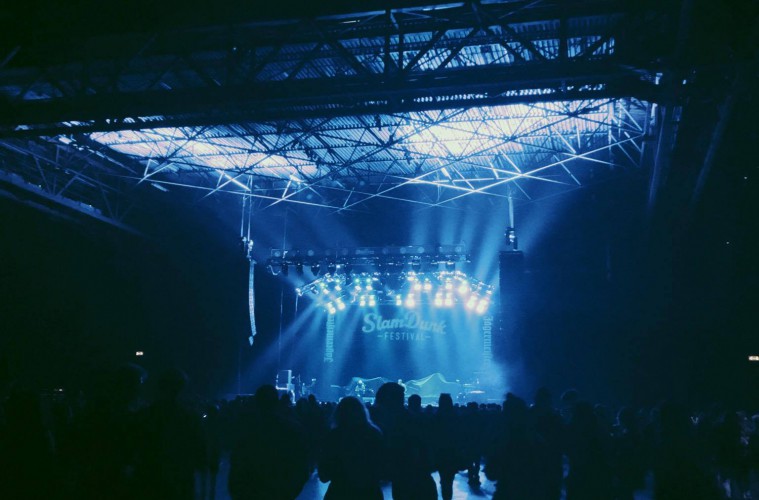 Through the Eyes of a Fan: Slam Dunk Festival @ NEC, Birmingham

As one of the first festivals to hit the UK this summer, Slam Dunk has had a lot to compete with this weekend. Radio 1’s Big Weekend in Hull along with Common People Festival in Southampton all took place at the same time but that didn’t stop two out of the three Slam Dunk dates from selling out. For anyone who is unaware of the festival, it has been regarded over the years as one of the best rock festivals in the UK, and has continued to impress year upon year with its incredible lineup.

This year has definitely been a nostalgic one with the likes of Cute Is What We Aim For, We The Kings, Madina Lake and The Maine taking us back in time to when we were younger, and it’s safe to say that not a single act disappointed. With the unfortunate attack that took place in Manchester one week ahead of the festival, it was to be expected that security would be heightened, yet the sense of togetherness made the atmosphere of the festival empowering regardless. The NEC in Birmingham was a lot larger than their Hatfield or Leeds sites, with thousands making their way across the grounds. We were surrounded by a different stage everywhere we looked, in every possible direction. The only difference with this site was that the main stage was located indoors, with the majority of the stages outside in the open. Whilst this may appear segregated for some, it meant that no stage was overpowered by another.

The first act we went to catch were Crossfaith, and believe us when we say that they took the stage by storm and were undoubtedly one of the best acts of the day. Drawing a massive crowd, lead vocalist Ken did not hold back. Playing the Jägermeister Stage this year meant they were not limited with their lighting set-up, and as they were indoors it meant their set did not get lost amongst the rest of the festival. Appearing after Andrew McMahon in the Wilderness, remaining spectators were ultimately shocked as to what they were witnessing. The transition between McMahon’s duelling pianos and the Japanese electronicore quintet left fans in utter disbelief. However, this just goes to show the diversity of Slam Dunk and proves why it’s a festival you will not want to miss out on. Crossfaith’s set was composed of a variety of songs from albums Xeno, APOCALYZE and their EP Zion, however their thirty minute set was deemed way too short by both the band and fans, as these guys could have easily filled an hour without boring people. Two of the biggest moments from the set included their performance on Ghost in the Mirror, which featured an onstage collaboration with Beartooth frontman Caleb Shomo, sending the crowd into chaos. If you think their set couldn’t get any better, then you were mistaken as they then went on to cover The Prodigy’s Omen, causing an already overwhelmed crowd to go into mass hysteria. Considering the size of the crowd it would be no surprise if Crossfaith came back to tour the UK in bigger venues than ever before.

As we have mentioned before, Slam Dunk does nothing but provide strength for the smaller up and coming acts. Black Foxxes and Milk Teeth were no exception to this. Catching a small moment of Milk Teeth’s set on the way out from Crossfaith, it seemed as though they’d definitely come a long way since their set at Leeds Festival last year. On the other hand, Black Foxxes have become increasingly popular ever since they supported Lower Than Atlantis back in 2015, as well as touring with You Me At Six earlier this year. Their heavy and progressive rock was the perfect progression for the festival, appearing on the Key Club stage after Fort Hope and Decade. Performing songs from their 2016 album I’m Not Well, the crowd couldn’t have been more approving. We would not be surprised if these guys rocked up higher on the bill for next year’s Slam Dunk. Black Foxxes have also been announced to play the UK’s Y Not Festival this year, as well as the prestigious Download Festival. If you couldn’t catch them this weekend then you’ve still got a chance to see them this year.

The next group we went to see were Cute Is What We Aim For on the Monster stage. Having not released anything in the 9 years since their last album Rotation, let alone since they performed in the UK, the band were welcomed with a fairly large crowd. The Maine followed them on the Monster Stage, and again kept the crowd young at heart playing a variety of songs from their 2006 album Can’t Stop Won’t Stop and the newly released Lovely Little Lonely. The Maine are touring the UK and Europe in September with support from Night Riots and The Technicolors. It appears that the Monster stage was the place to be for nostalgia, as We The Kings took to the stage straight after The Maine. With a few technical difficulties and a late start, hardcore fans waited patiently for the American pop-punk band. The outfit are also known for their increasingly popular appearances on YouTube, with singer Travis Clark, drummer Danny Duncan and bassist Charles Trippy all having larger followings outside of the band. Charles Trippy has a YouTube following of over 1.5 million, and it meant that fans from all over the world had made a special trip to come and see them perform, with one fan we found having travelled over 3000 miles from Israel with her friend to see him and his band perform.

In between Cute Is What We Aim For and The Maine, Counterfeit played the Impericon stage. For anyone who is unfamiliar with this band, you will definitely be aware of the singer. Jamie Campbell Bower, who has acted in films such as Harry Potter and Sweeney Todd, formed the punk rock band with Tristan Marmont, Sam Bower, bassist Roland Johnson and drummer Jimmy Craig back in 2015. It’s safe to say that Jamie Campbell Bower is a very talented man as his performances both on and offstage were not to be missed. When the band started playing, the crowd slowly but surely ended up doubling in size. Popular track As Yet Untitled (from their debut album, Together We Are Stronger) stood out, and we wouldn’t be surprised if the band keeps getting bigger and better.

As the day grew on the energy, for some, began to decrease. It takes a lot to cope with the amount of nostalgia and excitement that we saw a lot of people feel. Nevertheless, that energy definitely increased during Don Broco‘s set. Only a few weeks ago the band surprised their fans with new song Pretty, having disguised it as the live stream of bassist Tom Doyle’s wedding. Having seen the band earlier with one of the largest queues of the day for the signing tent, we could only begin to imagine what the size of their crowd would be during the set. Rob Damiani and co. opened with Everybody, during which the heavy bass and catchy guitar riffs brought everyone to their feet to watch singer Rob Damiani and the rest of the band put their heart and soul into each and every song their performed. They closed their set with their new single, Pretty. The band have gained a huge following and announced that they will not be touring or doing any shows in the near future until work on their new album is complete. With that being said, they do have a few more festivals to play up until the end of June and one show later this year which will be their biggest headliner show to date: a night at London’s Alexandra Palace.

The final act, and the one everybody had been waiting for, was Enter Shikari, who are celebrating the 10th anniversary of their debut album Take To The Skies. This band have been influencing younger generations for years with their politically charged anthems, and have generated a huge following throughout their career. Just last week we saw them release their new single Supercharge featuring grime artist Big Narstie, and with that the crowd were eager for them to appear. Opening with their self titled song Enter Shikari, the band kept the suspense going as the dramatic entrance lead to an amalgamation of heavy bass and carefully planned and detailed lighting. Aesthetically, it was one of the best performances we have seen in a long time. Frontman Rou Reynolds remained strong and powerful, engaging the crowd in political debate running up to the general election scheduled for the 8th June in the UK. This then lead into songs such as Anaesthetist and Rou’s statement about the decline of the NHS, emphasizing the power that the young generation have.

Reynolds’ emphasis on politics and the health of the UK did not sway his audience whatsoever. If anything, it brought them more alive and ready to face the tracks Enter Shikari were going to throw at them. Closing the set down, the band started to grow quiet, speaking out about the Manchester attacks. “If you’re going to pick a fight with live music, you will lose” declared the band, and quite rightly so. The emotion and the effect you could hear it having on Rou was overwhelming, and the crowd began to listen and watch with respect. The atmosphere was incredible and the unity which Enter Shikari had created felt empowering. Everyone stood strong and began to show their respect and sympathy to all those involved in the horrible event that took place. Lighters were held high above people’s heads, chants began to erupt and Rou brought out his acoustic guitar for a rendition of Oasis’ Half the World Away, bringing nearly everyone in the crowd to tears. This cover then transitioned into an amazing and rare performance of Adieu. The entire arena sang their lungs out, making for a stunning tribute to the recent event that unfortunately occurred. Rou and the rest of the band could not have pulled off a more perfect and heartfelt act. Closing their encore with The Appeal & The Mindsweep II, the crowd erupted with cheer and applause bringing an incredible end to the festival.

Enter Shikari closed out the first day of Slam Dunk with a touching rendition of Adieu. The track served as a tribute to those affected by the Manchester attacks, and was paired with a cover of Oasis’ Half the World Away. #EnterShikari #SlamDunk #Birmingham #Manchester

Slam Dunk Festival will return in 2018.