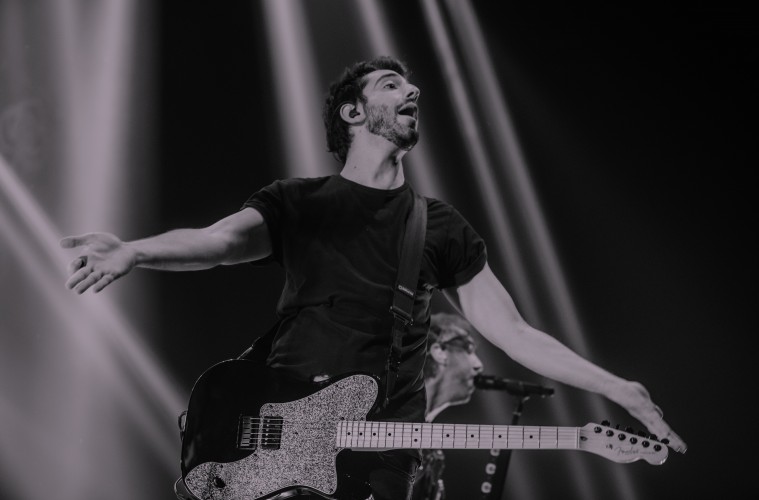 All Time Low in Amsterdam: Better Than They’ve Ever Been

All Time Low are the kind of band who tend to blow hot and cold. The first few records of their career really hit the mark, showing the world that pop-punk was still well and truly alive and didn’t need to change for anyone (an ethos still applied today by many). Then they experienced a bit of a slump, something largely down to the lacklustre Future Hearts LP, which just sounded a little bit too much like All Time Low trying to be a band that they weren’t. Now, and with the aid of the fresh and rejuvenated Last Young Renegade, they’re back and last night took to the stage for their largest Dutch headline show to date. Some 4,000 fans descended upon the AFAS Live in Amsterdam, with horror punk outfit Creeper and pop rockers Hey Charlie opening the night. Both bands (below) impressed in their own, unique ways, but it was clear that the bulk of the crowd had just one thing on their minds: Alex Gaskarth and his bandmates. Taking to the stage just after 9:30pm, the Baltimore quartet (plus live guitarist Bryan Donahue) kicked straight into new cut Last Young Renegade, setting the tone for the rest of the night with a gripping live show and new sense of onstage tightness. All Time Low sound better than ever before, powering through ninety minutes of new anthems and old hits with little to no interruption. The onstage banter which Gaskarth and guitarist Jack Barakat are known for is still there, but they seem to have taken it down a few notches as they attempt to appeal to a maturing demographic. Did it work last night? Definitely. And the fact that they’ve managed to sustain the same audience for years whilst still picking up new fans along the way is pure testament to their musical ability. Fan favourites Weightless, Backseat Serenade and Lost in Stereo all featured, sounding fresh and rejuvenated alongside the more recent likes of Dirty Laundry, Drugs & Candy and Nice2KnoU. The latter three slotted in nicely with the former cuts, all making way for a blistering finale courtesy of Dear Maria (Count Me In). No matter how old you were when you discovered All Time Low, you can rest assured knowing that this track will always hold a special place in your heart. Gaskarth and co. seem to never bore of playing it live, so much so that it’s been their staple show-closer since the dawn of time. It’s highly unlikely that they’ll ever release a track which matches the raw energy and intensity of Dear Maria, but then again there’s no need for them try and replicate the past. Last night, All Time Low showed Amsterdam that sustaining your past is just as important as looking forward and trying out new things. They may have experienced lulls throughout their career, but right now is definitely not one of those moments. Last Young Renegade is out now; find a full gallery from last night’s show below.