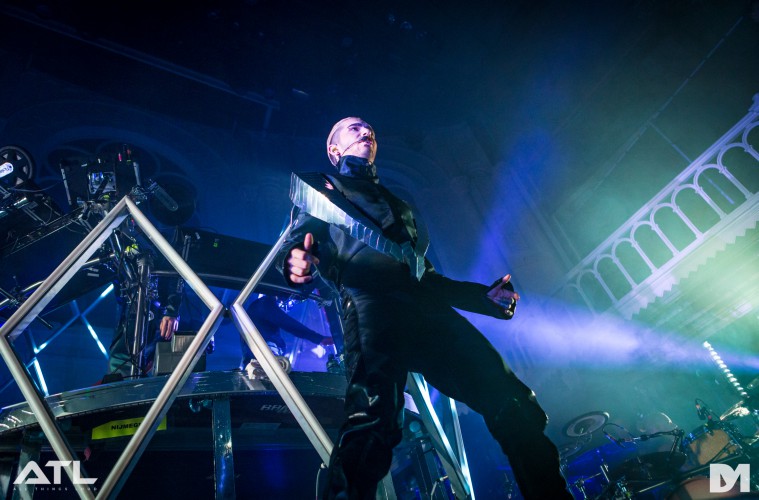 Tokio Hotel: “We really don’t want to put up with music industry bullshit”

Earlier this year, consistent German quartet Tokio Hotel put out the fresh and divisive Dream Machine. Having billed it as their most ambitious and daring record to date, frontman Bill Kaulitz and his men trekked the world in pursuit of putting on the perfect live show, one which complemented the new music as pristine as possible. We called up Kaulitz to discuss the record, its live show and where on earth they’ll go next. I’m good too, thanks! Your most recent studio album, Dream Machine, came out this year. Can you tell me more about how you approached it, particularly in comparison to previous records?
On this album we were far freer to do whatever we wanted. We didn’t to talk to any record labels or management companies, and we cut out everyone along the way, producers included. We wanted to go back to the basics and just rely on our instincts to create something that made us happy. Tom (Kaulitz) and I went into the studio to write the first demos, and then we spent a full year recording it. We did everything on our own, and nobody else was involved. It was the first time that we’d done it like this, and it ended up being the album we always wanted to write. Afterwards, we played it to people to see who wanted to be involved, and who our best partner could be. We did it the other way round, basically. We were super happy with Dream Machine, and I’m personally still very excited about it.

After you finished the album, you switched from Universal Music to Starwatch. How did that come about?
So basically, Starwatch already wanted to talk to us even before the album, right after our ten years with Universal Music has ended. We were happy to be free as a band and talk to whoever we wanted, but with Starwatch we just weren’t ready to talk to them yet. We went and made the music first, and once we were comfortable we had a talk. Markus from Starwatch told us to just take our time. When we were ready, we flew out to speak with him, but before he even heard the record he decided to offer us a contract. He told us he was a big fan and that he had a lot of confidence. Luckily he was happy once he did hear the album!

Later this year you’ll be bringing your live show back to Europe. What can we be expecting this time round from a live production sense?
We started touring Dream Machine in March this year, and we’ve always liked to put on a show. We even try to do stuff that hasn’t been done before when we play in smaller club venues. We always want to entertain people and give them a show that they’ll never forget. Everything we do with Tokio Hotel is big, and this time round we’re doing encore shows because the first run was so successful that people wanted us to do it again. There was huge demand. We’ll probably play a couple of new songs and mix up the set to keep it interesting for us, and there will also be a very big production with special effects, lights and costume changes. There’s always a vision in our heads for either a video or live show, and when we prepare to tour we pick our favourite new songs and attempt to create a show which both the old and new fans will like. Some people grew up with the old stuff and want to hear that, and other people come to hear the new stuff as they discovered us later on. They don’t even know the old songs. We always try to create a live show that’s exciting for everyone, even us. Sometimes there are songs that we’ve played so often that it starts to get boring; it’s like having a hit song everyone loves that you don’t want to change too much about. There’s a very fine line, and on this tour we’re going to pretty much play every new song. Did you go into the studio for Dream Machine with a particular live show in mind, or did you approach it the other way round?
On our older album tours, we had such a big production that it was pretty challenging for us. We were scared with this live show, because the previous one was already quite over the top in itself. We wondered how we could make it even better, because the bar had already been set pretty high. Dream Machine is far dreamier and way more playful, and it’s not as hard as the previous record. Our lighting guy and set designer for the previous tours both stayed with us, which is because we like to keep the same people involved all the time. We sat down with them and tried to create something dreamier, something different. I think that we did a good job, and I feel like it’s the best show we’ve ever put together. We enjoy ourselves a lot.

You’ve come a long way since your heavier beginnings. Do you ever have the desire to go back to that style of music and potentially incorporate it more into your current electronic sound?
The thing is, songs like Monsoon are so different to what we do now. It’s almost fifteen years old! The band has changed so much musically, so there’s a very fine line involved when it comes to changing the songs in a way that fits the current live set and what we do today musically. We also want to keep everything authentic and to the point of what a song is about. Sometimes we twist it, but the boys just play so many instruments at the moment. Tom rarely plays the guitar anymore, to be honest. There’s only three musicians in the band, but there are also a lot of different sounds. We rehearse a lot, and we always want to play everything. On some songs we’ve worked with seven different laptops, and we really do our best to play all of that live and process it just like we did on the record. There’s a lot of preparation involved.

So would you consider yourselves more of a live band, as opposed to a studio band?
I think we enjoy both, to be honest. Tom particularly enjoys being in the studio, and he’ll be in there every day writing and producing different things. He likes to be in the background a lot. As a band, we like both sides, as we all like writing songs. I really like being onstage after a while, because I just need to perform and be out there. I love being onstage, so I feel like I’m the pushiest when it comes to that. I love the process of creating a live show, but Tom not so much. He prefers being in the studio, but on the whole I think we’ve always been a live band.

Have you got any idea of in which direction you’d like to take your music in the coming years?
I think we’ve totally found our sound Dream Machine, and I believe this is the signature of what Tokio Hotel is. It’s the most authentic record we’ve ever made, as nobody else was involved at all during the process. We might collaborate with writer and producer friends along the way, but we really like how we did it on this record. We only want to have fun, and as we’re in this stage of our careers we really don’t want to put up with music industry bullshit. We don’t want to compromise with anything, and we’re not hunting for commercial hits anymore. It’s all about our music and the accompanying live show, and it means something to us. Direction and genre-wise, new music is really going to sound a lot like Dream Machine.

Thanks for your time, and good luck!
Thank you!

Dream Machine is out now, and you can catch the band live at the 013 in Tilburg on 7 November. Get your tickets here, and listen to Dream Machine below.