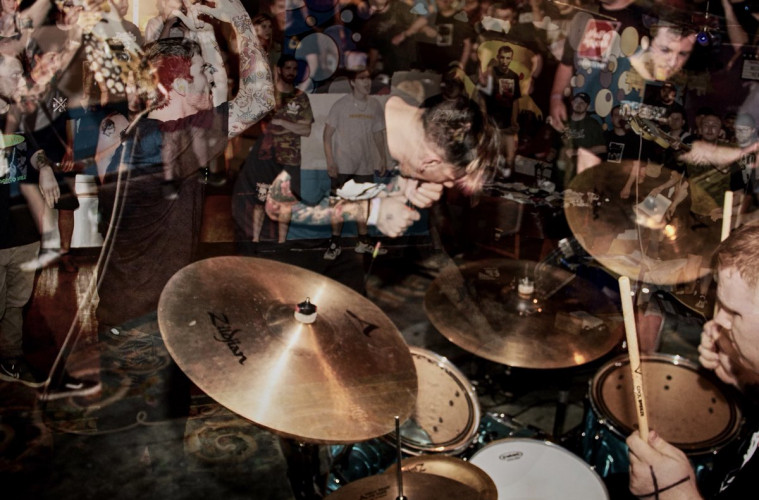 Post-hardcore band Tourniquet are in hot water after leaving one fan with near-fatal head injuries.

As per a graphic Facebook post by Jeffrey Esgro, a member of the band is said to have – during an overtly frenetic show supporting Knocked Loose – whacked a guitar cab on Esgro’s head, leaving him unconscious in the middle of a pit.

The whack left Esgro with head injuries which required stitches and supposedly came very close to leaving him in a coma, something which he has made sure of pointing out in a lengthy and graphic Facebook post. He further points out that the injuries he sustained could have left him for dead. Instead, he’s left with a gaping head wound and $6,000 in medical bills.

Taking to Facebook, Esgro wrote: “Well… I hate posting on fb but but I could have been killed 2 nights ago so it seems necessary. So I went to see knocked loose in Wilkes barre Monday night and this band tourniquet opened the band seemed decent the room was moving and I was at the edge of the pit obviously watching the pit to make sure I didn’t get hit and then… Bang! everything went black and I looked up and had blood running down my forehead with a 6 inch gash down the front of my head didn’t even know what was happening all I knew is that it was a hell of an impact i guess the band wasn’t satisfied with the crowds energy so they decided to look directly at me and spike the corner of their guitar cash directly at the top of my head I could have been put into a coma or even killed on impact doctors said it was harder than the impact of a full swing from a wooden bat then they proceeded to throw their mic stands and guitars at the crowd then when they realized they injured someone they immediately started to pack their gear and bring it to their van cuz they knew they fucked up.

I got help from one lady who gave me a towel to hold on my head as I was standing there with a concussion and a gash on my head barely able to stand the band and the venue wanted nothing to do with it, I get that the venue had nothing to do with it so they didn’t want police and ambulances involved so I did the right thing and my buddy rushed me to regional hospital in scranton now I’m left with 6,000 dollars in medical bills, a concussion, a swollen head, and 7 staples holding my head together (btw they don’t use any numbing when stapling the head so I had to take 7 staples to an already open wound without anything to numb it) so all and all fuck tourniquet. Ive been part of the hardcore scene for about 10 years now and I’ve never once witnessed anything like this let alone experience it. That’s not what the scene is about it’s about being a family and being there for one another and that band didn’t give one shit If I lived or died that night so I think it’s time to find a new scene cuz this one isn’t about that. Fuck tourniquet and anyone who supports them.” (sic)

Tourniquet are yet to respond to Esgro’s claims. You can read his entire allegation here, which includes graphic images of his head wound. It’s all fair and well walking into a hardcore show with the knowledge that you’re never entirely safe, but nobody should have to leave a venue – bloodied and concussed – having been assaulted by an artist in the name of “performance“. Even more so when the band decide to pack up and leave in a hurry to avoid the consequences of their actions. We will update this article if and when Tourniquet or a member of their management responds to Esgro’s claims.

NOTE: A previous version of this article referenced a different Tourniquet. This has been amended.