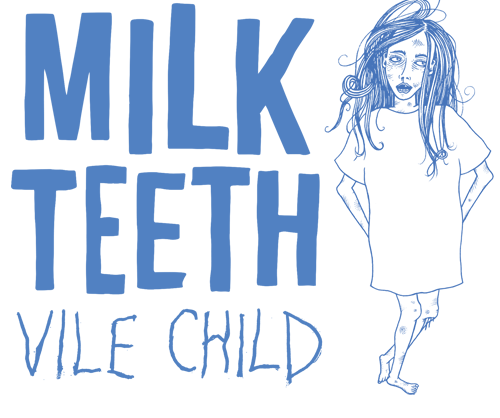 Bristol’s Milk Teeth have seemingly sprung out of nowhere. Having spent the last couple of years putting out EP’s and singles, the Becky Blomfield-fronted outfit are now gearing up to release debut album Vile Child, out this coming Friday (29 January). The album is now streaming on Soundcloud, and below we’ve undergone the task of analysing it track-by-track.

BRICKWORK
Vile Child opens on the instantly catchy Brickwork, which pushes all of Milk Teeth’s strongest cards to the forefront from the word go. “And it’s my fault now, and there’s blood on the ground” howls Blomfield during an upbeat verse, one which is underpinned by gritty guitars and forceful percussion courtesy of guitarist Chris and drummer Olly. The track’s outro is laced in distorted guitar jangles and spoken-word vocals, both of which die down instantly as the chorus returns and disappears in an instant.

DRIVEAWAY BIRTHDAY
Driveaway Birthday slows the pace down a little bit, placing more emphasis on a higher-pitched melody line and grune-esque chordal sequences. When it comes to describing Milk Teeth’s sound, you could place them into two distinct categories: hardcore punk with a hint of pop sheen, and slacker rock with grunge undertones. Driveaway Birthday falls under the latter category, bearing resemblances to Canadian outfit Speedy Ortiz and messy math rockers Krill.

BURGER DROP
On Burger Drop, Milk Teeth demonstrate more of the grunge influences which seem to soundtrack the whole record. “You wanted me, but she’s still calling you baby” declares Blomfield bitterly, before the chorus reaches for more anthemic heights. Blomfield’s vocals are extremely distinct and give Milk Teeth the kind of raw edge which not many bands have nowadays. Although there are elements of Paramore-lite (circa 2000’s) present, you can still hear that Milk Teeth have carved their own niche.

BRAIN FOOD
This one is a stunner. Brain Food opens on fuzzy distortion and a manic sounding riff, before everything kicks into place and flies in all directions. “No one in this town will hire me” sings Blomfield as her band attempt to keep up with her fast-paced vocals by producing punk-meets-grunge riffs and progressions. The track, like most on Vile Child, is just shy of three minutes, coming to an upbeat ending by means of colliding instrumentation and Blomfield’s relaxed musings. “It’s hopeless, frustrated” she (in a rather downtrodden manner) declares.

SWEAR JAR (AGAIN)
“Put another penny in the swear jar” sing Blomfield and guitarist Josh in unison on Swear Jar (Again). It’s a slower track with even more grunge-y hints, yet again in the vain of Sadie Dupuis’ Speedy Ortiz. Hints of Wolf Alice also fly by, although it’s still Blomfield’s dominating vocals which stand out. “We spent last year’s money on misbehaving” she sings, adding, “We swore we were creating”. And with that, the track comes to a subtle and lilting ending almost as if nothing ever happened.

GET A CLUE
Get A Clue is the first instant hit of hardcore punk which Milk Teeth pull out of the bag on Vile Child, instantly seeing Blomfield growl, “this isn’t you, you’re a product of the human zoo”. There’s truth to her words, and she seems to be putting across her message with utmost urgency. Underpinning her vocals are upbeat fuzz-laden guitars and upbeat percussion, both of which do nothing more than aide Blomfield’s batshit mental growls. Think Becca from Marmozets, but with extra raw intensity. MOON WANDERER
On Moon Wanderer, the band take another step back and lean towards lighter elements of poppy grunge. Blomfield declares that she’ll be “safe and sound” as the chorus goes into full-on anthemic mode. Bearing resemblances to Wolf Alice, Moon Wanderer is one of the more laid-back rockers on Vile Child, placing more emphasis on carefully constructed instrumentation and lyrics.

KABUKI
If there was ever a suggestion that Milk Teeth had been listening to a lot of Speedy Ortiz’s music, then look no further than Kabuki. Coming in at under two minutes, Kabuki is nothing more than an acoustic guitar and Blomfield’s serene vocals. It’s more of a filler moment on the record, albeit still a nice one.

CROWS FEET
Powerful percussive blasts give Crows Feet lift-off, making way for a happier sounding verse which is laced in distorted guitar and pulsating bass. There isn’t much to Crows Feet other than the basic elements which Milk Teeth utilize on every song Vile Child has to offer, yet the happier edge still does helps it stand out to an extent.

LEONA
“Share with me your shame” screams Blomfield at the start of Leona, asking to be reassured that she “is not the one to blame”. It’s a slow slacker track, flittering between screams and a clean chorus underpinned by siren-like wailed guitars. Blomfield tells a story through her vocals, one of lovelorn regret, shame and disappointment. As the track builds up to a powerful close, everything suddenly comes to a halt and Blomfield’s manic screams take over. “You are now to blame” she howls as Leona comes to a sprawling close.

CUT YOU UP
This is by a long shot the best song on the album. From the off, Cut You Up goes absolutely mental with pulsating rhythms and gritty guitars. They both combine to accompany Blomfield’s hallucinatory growls seamlessly, even if these growls become borderline atonal at times. Cut You Up doesn’t slow down for one second, keeping everything high-octane for as long as possible. “Why don’t you step inside my atmosphere?” asks Blomfield, before the track comes to an absolutely cataclysmic end. At just over two minutes long, Cut You Up is short, sharp and spectacular.

SUNBABY
Vile Child comes to a close on the melancholy Sunbaby, with guitarist Josh taking the helm vocally from the start. His vocals are laced with a water-y effect, before being obliterated by Blomfield’s furious screams during the chorus. Sunbaby bears vague similarities with Bay Area outfit Deafheaven, something which the track’s down-tuned bassline and dark vocals lean against. Sunbaby eventually comes to an epic close filled with high-pitched solos and fuzz, bringing Milk Teeth’s debut album to a hypnotic close.

On Vile Child, Milk Teeth have one of the best debut albums of the year so far. Considering the broad range of influences which are present on this record, Milk Teeth may well become a crossover success in more ways than one. 9/10
If you like this, you’ll like: Speedy Ortiz, Blood Red Shoes, Wolf Alice.

Vile Child is out on Friday via Hopeless Records. Stream it below.