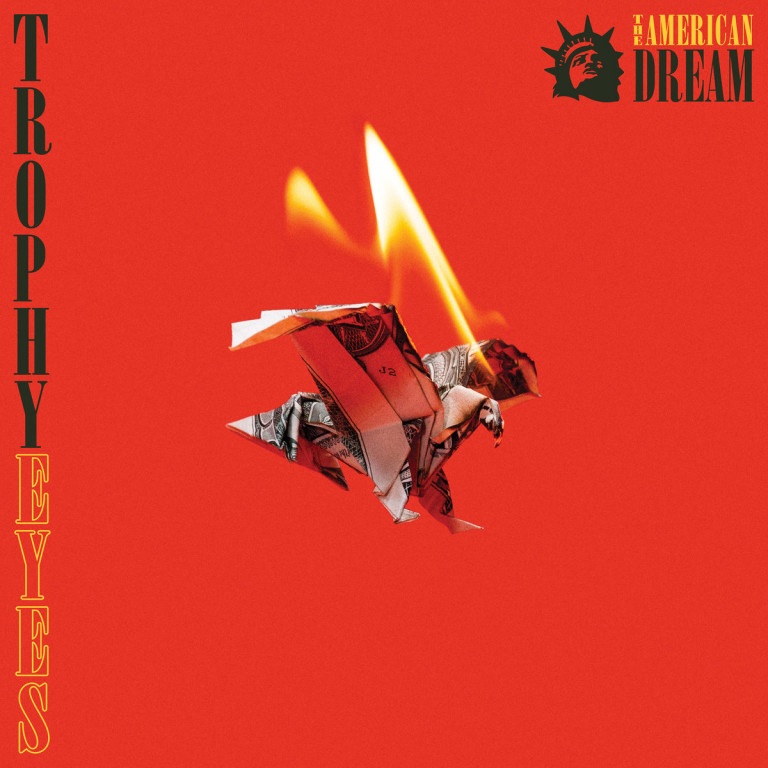 Cathartic feelings and unforgiving memories run through Trophy Eyes‘ new album, The American Dream. The Australian band truly deliver heartfelt songs drenched in melancholic moods, tracks bolstered by poetic lyrics which hit like a heart attack, like stones thrown through window panes. They’ve always been an act who wear their hearts on their sleeves, saying what they feel and think and never restricting their beliefs and thoughts. Keeping the emotion flowing throughout a record usually demands attention to detail, and Trophy Eyes have worked tirelessly on creating wonderful beats and melodies as well as poignant words.

The whole record is a story, a crusade through dusty eyes and drunken tendencies. The fable is splattered in references regarding alcoholic nights, fuelled by rage and tainted love, but there are no clichés to cause mundanity. No song on the album is a filler, they’re all important and relevant, filled with truth and stark outlooks. The band clearly hurt, too. They’ve witnessed low moments, they’ve seen tired eyes shut forever, and they drank their livers into oblivion. And from what we hear on the record, they’ve brushed with death too many times. We hear all this unfold on The American Dream as if we’re watching someone lose control of their existence, someone consumed by guilt and stricken by alienation. Vocalist John Floreani sparks fury at times, singing about collapsed potential and hopelessness. He is a vocalist hell bent on telling his story, and you know what? It’s an interesting one. It’s often a harsh one, but he’s entitled to deliver his feelings.

The album starts blisteringly well. Autumn is a loud punk thriller, crafted to tell tales. Floreani sings to a kid about his broken self, telling him not to let sad songs rot his brains. It’s an insightful listen and one of the most gratifying openings to a punk record in a long time. Something Bigger Than This is Trophy Eyes at their best. A man doesn’t want to wake up in the same old skin; he wants to make himself known and become someone of significance. The guitars add dimension here, while Broken is a loud and unapologetic track bursting with poetic strands. The protagonist is in pain, walking wounded, looking for answers, and it’s a ballad of sorts. The slow tempo beat combines well with those hardened vocals. Miming To The Choir is a classic. It starts slow until the loudness comes through, breaking into a singalong about despair.

The American Dream is one of the most enthralling records a punk band has released in a long time. It’s a momentous push for redemption, and it’s a credible dash for justification. This band are enormously talented, creating guitar blitzes with brilliant lyrical underpinnings. Punk sometimes relies heavily on the same ethos and lyrical blend, but Trophy Eyes are utterly original. The American Dream is an artful, often emotional opus bound in intelligent wordplay. Punk has had a true makeover. The American Dream is out now.