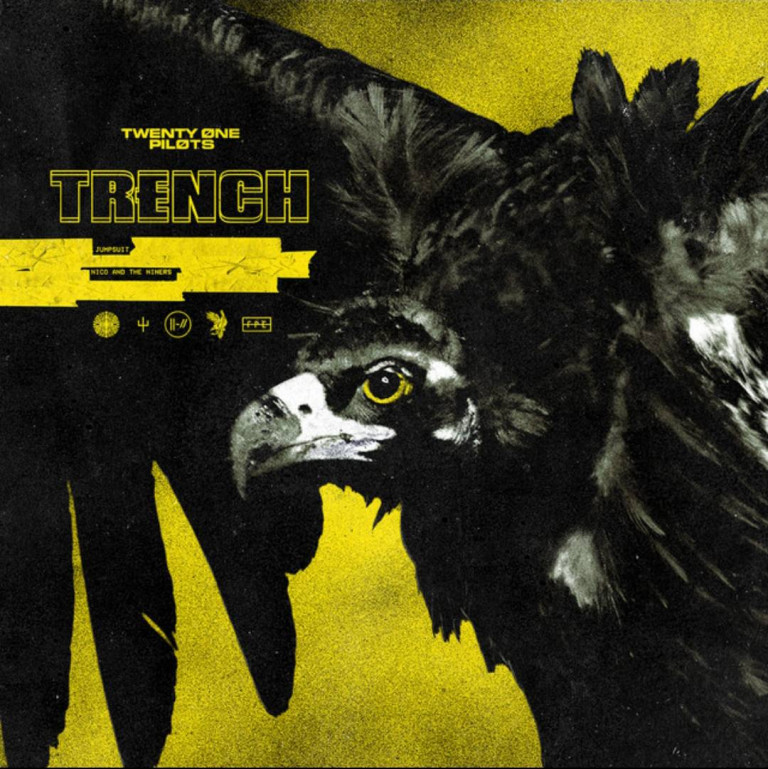 TWENTY ONE PILOTS’ Trench: An Insight Into 2018’s Hottest Record

Every few years, a band comes along whose (cultural) impact is so large that it stretches far beyond the confines of their hyperactively dedicated fanbase, lodging themselves firmly within mainstream pop culture for decades to come. twenty one pilots is one of those bands, and it’s not hard to see why. New album Trench – out today – is the most concept-driven instalment of their career, and it further serves as their darkest and most personal collection of music to date. It’s an album which vocalist Tyler Joseph and percussionist Josh Dun spent the best part of eighteen months working on, and it delves into the deepest, darkest depths of the former’s mind. Lathered in dark synths, booming rhythms and a gritty, visceral conceptual approach, it may also serve as one of their best. Today, on its long-awaited release date, we take a look at the fourteen songs which make up Trench’s 56 minutes. Does the album sound like a potential smash hit follow-up to the immeasurably popular blurryface?

In short, both yes and no. On Trench we’re met with a collection of songs which are meant to serve as a grim conceptual piece surrounding a reimagined world which lead singles Jumpsuit (a brazen behemoth of a track, complete with screams and an explosive finale) and Nico & the Niners (a ukelele-laden radio hit) introduced to fans back in July. Its existence is cloaked in mystery and places heavy aesthetic emphasis on burning cars, radioactive waste, neon lights and literal trenches. Trench is meant to represent a world governed by the mystical DEMA, an organisation first mentioned at the start of the band’s hiatus during an awards show acceptance speech. From the off, twenty one pilots gave fans the impression that Trench would be a full-on conceptual experience, however this eventually becomes less apparent upon listening to the album as a whole. There are definite topical threads which tie certain songs together (a mention of the character Nico on the soulful Morph, for example), but it feels scattered and interrupted by songs which have little bearing on the story of Trench, DEMA and the so-called bishops. Take Chlorine, for example. Over the course of more than five minutes, Joseph sings quite fervently about solving mental health issues with by drinking chlorine (a metaphor for suicide, perhaps). It’s a topic which seems to shine a light on Joseph’s internal battles, although – as with all of his lyrics – we can never be 100% how much of it is honesty and how much of it is cloaked in concept and metaphor. It doesn’t fit in with the world of Trench, but it does allow for Joseph to really put his heart out on the line in a way he hasn’t done before. “I’m running from my life” he wails over a mix of pounding percussion and dark synths, both of which intertwine to inject some groove into the mix.

Not that the lack of continuous conceptual threads is a bad thing, though. Trench is a well thought out record full of lyrical gems and intricate instrumentation. The aforementioned Morph – a bona fide RnB banger – makes good use of Tyler Joseph’s falsetto’d vocals, which add a seldom seen sense of playfulness to proceedings, despite the lovelorn lyrics (“Are we still in love?”). This playfulness is further explored on penultimate track Legend, the song on Trench with the most hit potential. It’s a short but sharp slice of musical happiness, complete with cheerful keys, ukelele’s and brass. Its lyrical content, a farewell letter of sorts from Joseph to his Alzheimer-stricken grandfather, is pensive and emotional (“You’re a legend in my own mind. My middle name, my goodbye.”), and this sense of emotion is present throughout the album. The slow-burning Smithereenes sees Joseph at his most fragile as he sings of needing his significant other by his side in order to keep himself together. My Blood does this too, with Joseph (in falsetto) pleading for someone to stay over upbeat RnB rhythms. “You don’t need to run, stay with me” he sings as a prominent bassline underpins his missives with sharp ferocity. Heart-on-sleeve emotional outpourings are, as you may have noticed, a consistent theme on Trench alongside love and the burdens of fame. This latter topic is highlighted well on The Hype, another track with hit potential. Its lyrics explore taking a step back as the pressures of worldwide notoriety start to take their toll, something which links directly to the band’s year-long hiatus. Joseph sings of his mind needing to sanitise, and it’s here that we get a deeper insight into his coping mechanisms in a world where everyone is your friend once you do well. “You’ll be just fine, just don’t believe the hype” he claims as he confesses that he doesn’t “know which way I’m going”. Although to a lesser extent, the gritty and abrasive Pet Cheetah (complete with pulsating hip hop rhythms) also covers burdens on the mind and how you go about getting to the bottom of their underlying causes. There’s a reference to Jason Statham thrown in for good measure among Joseph’s musings, which only pick up in intensity as his raps progress. He sounds reflective, but more so he sounds resentful and angered.

The rest of the album is filled with occasional conceptual references, slow-burning RnB jams (a common instrumental thread, albeit not always successful – see Bandito) and intricately constructed lyrical passages which give you as much of an insight into Joseph’s world as you’re probably ever going to get. He’s not afraid to admit that he’s been through incredibly tough times, even if it means really putting your thoughts and emotions out there for the world to analyse and hopefully relate to. Neon Gravestones does this in a way which some fans may indeed relate to (Joseph sings of mental health and how it’s no longer a stigma), even going so far as to encourage listeners to find some time to pay respect to your elders. On Cut My Lip, he touches upon self-medication and fighting back (“I keep on growing, even though it’s me I abuse”) in an overt manner, but it just doesn’t have as much musical impact as you’d desire. It’s on the ever so slightly anticlimactic album closer Leave the City where listeners are greeted with the final explicit references to the conceptual world of Trench as Joseph sings of trying to depart it. He ties it in with a very explicit reference to the hiatus, which puts a spin on the conceptual world he’s constructed almost so as to say that Trench is a part of him and his mind. “Last year I needed change of pace, couldn’t take the pace of change; but this year, though, I’m far from home. In Trench I’m not alone. These faces facing me, they know what I mean” he declares. It’s a poignantly honest end to an equally honest record, even if there is a considerable lack of oomph in its instrumental accompaniment (the one key build-up in the track slowly dies down, sadly).

It ought to be noted that, despite all the instrumental layering and tight vocals (which hit their peak on the pacy Levitate), Trench is an album which follows very similar formulas. This isn’t always a bad thing, though. Roughly three quarters of Trench is comprised of slower, RnB tinged tracks which serve as a simple backing for Tyler Joseph and his musings, with the remaining quarter reserved for out-of-the-box experimentation and bona fide radio hits (see: Legend and The Hype). It’s equally important to add that, despite the clear focus on Tyler Joseph, Josh Dun is an incredibly underrated music. He holds Trench together, even in moments where you wouldn’t pick up on it. And despite the aforementioned lack of clear conceptual threads on every track, Trench still does have its own identity. It essentially serves as a collection of fourteen incredibly emotive and honest open letters courtesy of Tyler Joseph, highlighting every single facet of the last eighteen months and the emotional toll being in such a successful band has had on his life. It’s not always easy listening from a lyrical perspective, but it is consistent, and that’s good. Even on songs which sound somewhat happier (once again, see: Legend) there’s a deep sense of regret and sadness, and it’s a feeling you’ll have a hard time avoiding on Trench. Regardless of the subject matter (love, mental health or the burdens of fame, to name but three key talking points), Joseph manages to hit the nail on the head. This is a man who’s been to hell and back and still has it in him to be as honest as humanly possible in the hope that it can connect with someone. Trench is an album which can mean something to everyone, and that includes you. It may not have the happy-go-lucky smash hit potential which blurryface paved the way for, but it’s still an important addition to the back catalogue of a band who have the world at their feet yet again. Trench is out now via Fueled by Ramen.